Skip to content
Become a member and get exclusive access to articles, live sessions and more!
Start Your Free Trial
Home > Features > The Gig: B.B. King 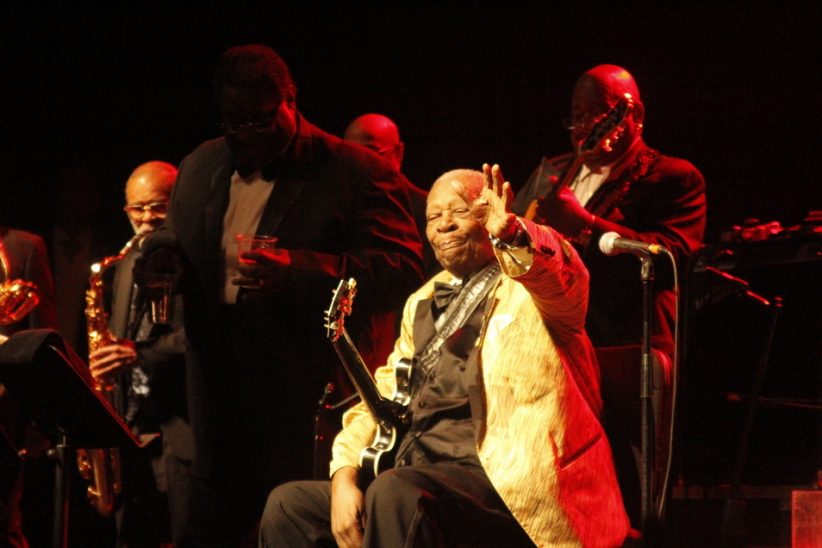 B.B. King, who died in Las Vegas on May 14, at 89, will be forever remembered as one of the greatest bluesmen of any era, a guitar player of rough eloquence and a singer of dignified fervor. His irrefutable sobriquet, the King of the Blues, could hardly have been more fitting or just. And the shadow he cast on rock ‘n’ roll is a matter of settled fact, with proud inheritors like Eric Clapton, U2, Carlos Santana and Billy Gibbons of ZZ Top. But his artistry also resonated with jazz. More than any major blues hero of his generation-more than Jimmy Reed, more than Buddy Guy, more than his fellow surname sovereigns, the otherwise unrelated Albert and Freddie King-B.B. had a feeling for jazz musicians and jazz protocols, often giving them purchase in his music.

Born on a cotton plantation in Mississippi in 1925, he came up at the right time to understand jazz as a music of the people, with shining exemplars like Louis Armstrong and Duke Ellington. (In 1960 he’d record a version of “Don’t Get Around Much Anymore,” as a guest vocalist with a studio band including only two noted Ellington alumni and no Duke; it was released a decade later, more than a bit misleadingly, as Stereophonic Sound of Duke Ellington.)

As for his jazz guitar influences, King was an aspiring young player when he first heard the Gypsy ace Django Reinhardt, on some 78-r.p.m. records that a friend had picked up in Europe during the war. He first heard the pioneering electric guitarist Charlie Christian, another formative figure, around the same time. Their shapely single-note lines, and the melodic thrust of their improvising, left more than a casual imprint on King’s emerging style, as did their fluency with chord arpeggios and diminished scales. Though his trademark as a guitarist was a straight-from-the-gut, vocal approach, you can hear the jazz influence in flashes across his career-say, in his phrasing on the original recording of “Woke Up This Morning (My Baby’s Gone),” from the early ’50s, or on subsequent live versions of “Sweet Little Angel,” including one played at the Village Gate in ’69.

Famously, King had a name for his guitar-Lucille, called out in many a song-and that personification got woven into the fabric of his music. It wasn’t just that he could make the guitar cry, whisper or shout, with his expressive touch and signature vibrato. There was a principle of dialogue, a call and response, in his performances. Hear him voice a complaint; hear “her” sympathetic or chiding reply. This was, of course, rooted in African-American musical custom going back at least as far as field hollers. But in King’s case, it was also probably informed, in part, by the cosmopolitan example of a lead singer entangled with a soloist’s obbligato: Jimmy Rushing and Ben Webster, Billie Holiday and Lester Young. “I’m kind of from the big-band era,” he told Blues Access magazine in 1999. “I was crazy about Benny Goodman, I liked Count Basie, Duke Ellington, Jimmie Lunceford and all the big bands that had blues singers with them.”

Through most of his career, King favored jazz-patterned horn sections, often clearing room for solos. He made his earliest records for the Bullet Recording and Transcription company in Nashville, with a murderers’ row of Memphis talent that included pianist Phineas Newborn Jr. and his guitarist brother Calvin. Once King became a touring act, in the ’50s, his band turned into a way station for jazz musicians. Half of this year’s class of NEA Jazz Masters, tenor saxophonists George Coleman and Charles Lloyd, had formative moments in King’s employ. “I went on the road with B.B. King in 1955,” Coleman told me recently; it was his first important gig outside of Memphis. After King’s death, Lloyd posted a note on Facebook: “I had the honor of playing with B.B. at [promoter] Sunbeam Mitchell’s Hippodrome in Memphis while I was still in high school,” he wrote.

There are traces of jazz on virtually any live recording by King, especially in his touring heyday. This is obviously true of Live at the Regal, his single finest album, recorded in Chicago in 1964. (And not just because one of its standout tracks-the slow-burn, excoriating “How Blue Can You Get?”-was credited to jazz critic Leonard Feather.) It’s maybe even clearer on a recording made at the Fillmore East on June 19, 1971. That concert begins with a funky jazz overture, with solos by most members of his band, which then included workhorses like the New Orleans saxophonist Earl Turbinton. Then, en route to delivering King’s smash “Every Day I Have the Blues,” the band slips in one chorus of “Blue Monk,” at a playfully bleary pace. When “Every Day” finally kicks in, it’s set as a galloping shuffle clearly meant to evoke Louis Jordan’s jump blues.

As he settled into elder-statesmanhood, King accepted the laurels and tributes that were his due. Clapton paid homage with the 2000 album Riding With the King-giving B.B. top billing, and sharing in the resulting Grammy win and multiplatinum sales. A few years later, King and Clapton were both guests of honor at a Jazz at Lincoln Center gala titled “Blowin’ the Blues Away,” hosted by Wynton Marsalis.

Early in May, when King was still hanging on in home hospice care, I saw Clapton play a 70th-birthday show at Madison Square Garden. There was no overt tribute, though the allegiance still rang clear. I did hear a proper dedication a week later at the Iridium, courtesy of bassist John Patitucci, who was once a member of King’s band. From his new album, Brooklyn (Three Faces), Patitucci played an original, “JLR,” clearly patterned after “The Thrill Is Gone.” The featured guitarist on the song was Adam Rogers, and he made his solo a brilliant referendum on the enduring greatness of King’s legacy: flinty and relaxed, with a formal architecture that only slowly revealed itself. King died the next day, and it was this act of pitch-perfect tribute that stuck with me. The King is dead, I couldn’t help but think. Long live the King!

Organ trios and quartets were ubiquitous by the mid-1960s. In African American neighborhood bars and clubs up and down the East Coast, throughout the Rust … END_OF_DOCUMENT_TOKEN_TO_BE_REPLACED

Terence Blanchard looked around the restaurant table and launched into a gentle sermon about jazz education in Detroit that was part homily, part pep talk, … END_OF_DOCUMENT_TOKEN_TO_BE_REPLACED

Creating a program of solo piano music is the ultimate challenge for any improvising pianist. The music on my latest album, Ways of Disappearing (Sunnyside), … END_OF_DOCUMENT_TOKEN_TO_BE_REPLACED

First the good news: As you can see in our annual Festival Guide, there are plenty of jazz festivals scheduled to happen around the world … END_OF_DOCUMENT_TOKEN_TO_BE_REPLACED