Skip to content
Become a member and get exclusive access to articles, live sessions and more!
Start Your Free Trial
Home > Features > Tangents: The Desperate Wives of Dentists (and the Death of Jazz Radio) 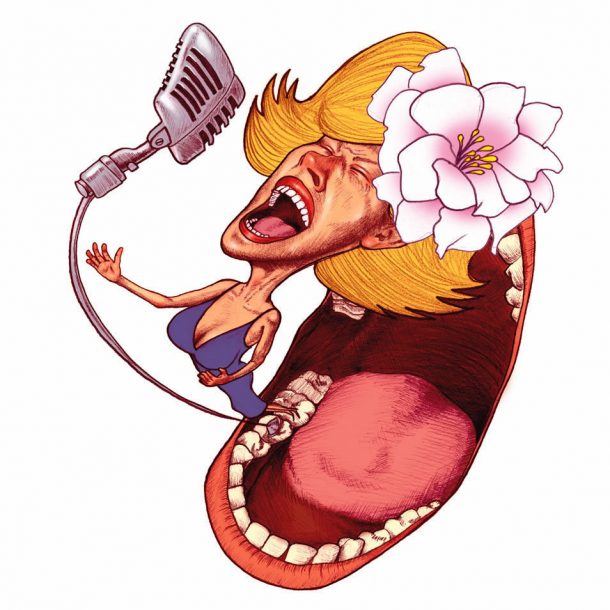 “What is ruining jazz radio today?” This was a recent topic of discussion between an acquaintance and me. He said jazz radio was suffering a worrisome onslaught of CDs from white guitar players with moustaches. For my part, I said that I was most afraid of what I call “The Dentist’s Wife Syndrome” in jazz.

The Dentist’s Wife Syndrome is basically this: A late-middle-aged, prosperous male (such as, well, a dentist) finds himself a younger trophy wife with deep cleavage and the even deeper delusion that she’s a jazz singer. To keep her happy and occupied while he’s out there in the workaday world bringing home the prosciutto, he finances some recording dates for her. They then send the results of this vanity project to jazz radio stations all over the country, to the horror and dismay of most music directors and programmers. I say “most” programmers. Some will actually play this stuff on the radio and therein lies the danger because, as a general rule, Dentist’s Wives are very bad singers. I guarantee you that when a Dentist’s Wife goes on the air, listeners go somewhere else.

I base these rather broad and scathing statements on several years experience as a jazz radio music director, a position that allowed me to receive and review scores of Dentists’ Wives CDs, none of which actually made it onto the airwaves. Music directors, though, are paid to weed through bad CDs as they search for the great ones. You aren’t. So here are a couple of dead giveaways for spotting a Dentist’s Wife’s CD. After reading them you will be able to identify and avoid a Dentist’s Wife’s CD without actually having to listen to it. It’s real easy. All you have to do is look at the photos.

This will consist of a photographic portrait of the artist, probably done by the same guy who shot their wedding and who now gets free dental work. The photo will be either head-and-shoulders or upper body, depending upon the plenitude of God’s gifts. Nine times out of 10, the hair will be blonde and slightly bigger than you might be used to seeing, though still safely this side of “trailer-park chic.” And then there’s the smile-and this is why I believe so many of these singers are married to dentists. They all have great teeth, and they do their damnedest to show each and every one of them on the CD cover. They do this by attempting one of those rather bizarre, open-mouthed, rectangular smiles that only Cameron Diaz can pull off without looking like she’s being electrocuted.

When you open the CD booklet, you will probably find a few rather poorly lit, black-and-white photos, all taken inside one of the cocktail lounges in which the wife most frequently executes her repertoire. In one photo, she’s onstage in full cry, with the microphone in her hand and a look on her face that is probably meant to suggest extreme soulfulness but, in fact, makes her look as if she’s just accidentally put her foot in a badger trap. In another, she’s standing between a couple seated at a table. She’s bending forward to put her arms around the two, and they’re all smiling at the camera. What you are seeing here is (once again) her cleavage, on either side of which are the folks who own the printing press where she got a deal on the booklets. In the third photo you will finally see the dentist, with the diva, facing the camera, each with an arm around the other’s waist. She’s looking as electrocuted as usual. He has a drink in his free hand and a proud look on his face that says, “Whaddaya know? I got rid of the elementary-school teacher I married back in college and finally got the chick singer. I really don’t care if this damn CD gets played on the radio or not.”

Misogyny Disclaimer: In my comments here, I have been hard on female jazz singers and have perpetuated the stereotype that some women, and especially blondes, are talentless gold diggers. Therefore, let me say the following, if not in my defense, at least to mitigate the injustice of any perceived stereotypes: Speaking relatively, there are unquestionably as many untalented male jazz singers as there are untalented female jazz singers. And most of these benighted boys have undoubtedly been financially aided in their quest for stardom by the women who love them. It just so happens that the females manage to put out more CDs, thereby becoming more of a pain in the neck than the males. I also suspect that most of the talentless gold diggers I had to listen to were not natural blondes.

Organ trios and quartets were ubiquitous by the mid-1960s. In African American neighborhood bars and clubs up and down the East Coast, throughout the Rust … END_OF_DOCUMENT_TOKEN_TO_BE_REPLACED

Terence Blanchard looked around the restaurant table and launched into a gentle sermon about jazz education in Detroit that was part homily, part pep talk, … END_OF_DOCUMENT_TOKEN_TO_BE_REPLACED

Creating a program of solo piano music is the ultimate challenge for any improvising pianist. The music on my latest album, Ways of Disappearing (Sunnyside), … END_OF_DOCUMENT_TOKEN_TO_BE_REPLACED

First the good news: As you can see in our annual Festival Guide, there are plenty of jazz festivals scheduled to happen around the world … END_OF_DOCUMENT_TOKEN_TO_BE_REPLACED