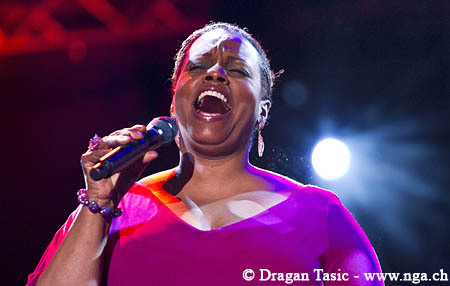 Singer Gretchen Parlato was accustomed to the atmosphere of the arts high school she attended in Southern California, where “you’re spoiled in a really good way with being encouraged and inspired and you’re surrounded by arts. It’s so rich, there’s so much opportunity that when you graduate your college years can seem a bit of a letdown. So it was kind of a good reality check to attend UCLA.” But making the transition wasn’t easy. “I had more teachers who took the tough-love approach. That works for certain people, but to be honest I never worked well with tough love. It’s never resonated with me.”

Yet at UCLA she also found Barbara Morrison. “I’ve always needed to feel safe and grounded and encouraged-and then I can open up,” says Parlato. “So in a time of challenge, when there were people questioning whether what I did was good enough or saying it wasn’t loud enough, or it was boring, or that I needed to open up my eyes and move around-you know, facing all these constructive criticisms-there was Barbara, who looked me in the eye and said, ‘But you know what, there’s something really special here.'” Those words made a big impression on Parlato, as did what Morrison said next: “‘And what Gretchen does, what you do’-she was talking to me but there were other students there-‘is you allow the audience to come to you.’ That meant so much to hear at a young age, that my approach was valid and justified and special.

“I think that was even more profound for me,” Parlato continues, “because Barbara is a soulful blues-based jazz singer, so she works completely the opposite of me. She has that big voice and I’m little me. So it meant even more for someone like her to acknowledge and appreciate where I was coming from. And she was always encouraging and shared such beautiful material and songs and tried to get us to really pay attention to the lyrics and tell a story. And even when we had no idea what that story was, she knew that [what she taught] would either resonate then or resonate later, which it absolutely has.”

Parlato mentions that her “beloved” teacher “has diabetes and she’s had to have her leg amputated. So she’s facing this transition and reaching out for help.” Now, Parlato says, Morrison’s students are looking for ways to return some of the support she’s shown them. (Those looking to offer assistance can contact Terence Love at [email protected])

Dianne Reeves didn’t know she could really sing until her junior high school music teacher, Bennie Williams, pointed it out. “She’s still a part of my life,” says Reeves, who has consulted “Miss Williams” over the years about career matters and also enjoys her company and lives by her example. “I call her my second mother.”

Her former teacher’s knowledge and expertise has reached beyond music. When Reeves was asked to read poetry at an event sponsored by a literary group in New York that also featured Meryl Streep, “I went right to her and we worked on the pieces I did. There’s an art to reading poetry so people can understand.”

The road to discovering the gifted and supportive Miss Williams, now 80 and still teaching music, wasn’t without its bumps. “It was the first year they started ‘busing’ in Denver, Colo., so we ending up going to a school “in a part of Denver I didn’t even know existed,” recalls Reeves, explaining that busing students was employed as a way to racially integrate schools in the late ’60s and early ’70s.” The school was “so far out it took us about 45 minutes to get there.”

At the other end of the ride, however, was Williams, a graduate of Bishop College in Texas and “a young African-American woman who was one of the teachers on the faculty. There was a lot tension when busing started. You were going far away from home and into these neighborhoods. Some people were welcoming but a lot of people were not. But the students seemed to have a kind of curiosity. We just wanted to be kids. And this teacher could feel the tension and she came up with a program for us to do. It wasn’t really a ‘talent show.’ It was a show incorporating poetry and the music of the day and we wrote our own commentary on the times and that was how it all began.

“I started in the chorus,” says Reeves. “I remember there was a girl who was going to sing an Aretha Franklin song called ‘Spirit in the Dark’ and she had a hard time singing it so I was in the hall helping her. I started singing and Miss Williams, who was my piano teacher at the time, came out and said, ‘Who is that singing?’ And someone said, ‘That’s Dianne.’ And she was like, ‘What?’ And she had me come right in and had me singing scales, and she said, ‘Oh, my goodness, we’re going to keep your piano lessons and we’re not going to tell your parents (so as to surprise them down the road), but you’re also going to have singing lessons.”

At the time, Reeves seems to have been just as surprised at the effect her singing had had on her teacher. “I mean, I sang around the house with my family but had never been on a stage and it was empowering to find out that I had a voice, and at a young age.”

“I’d do my lessons and then we’d sit and listen to different artists and discuss them. She’d say, ‘This singer is singing this song. This other singer is doing the same song. Let’s talk about the differences in their approaches.’ And she would always tell me, ‘There is no one like you in the world. That’s the beauty of the world, that we’re all unique. But we have to refine and define our uniqueness.’

“I love to talk with her. She’s a woman of the world and an encyclopedia of knowledge and she has the story behind the knowledge, which gives it a whole other different kind of weight.”

Many years later, after Reeves became professional, “We were out, celebrating Nina Simone, who is one of her favorite artists, and we sat down and discussed her music and approach. She was saying that when Nina would sing something like ‘Guess Who I Saw Today,’ ‘it sounds like she’s sitting there … She creates the living space and the energy and the light in the room … ‘ And all my life I’ve been able to look at songs in this way because of her.”

Because of Miss Williams, Reeves also made a crucial decision early on: “My grandmother used to say, ‘Don’t put all your eggs in one basket.’ I remember one day, clearly, as if it were yesterday, I walked out of her classroom and said to myself, ‘I’m putting all my eggs in one basket.’ And from that point on it was all about the music.”

Organ trios and quartets were ubiquitous by the mid-1960s. In African American neighborhood bars and clubs up and down the East Coast, throughout the Rust … END_OF_DOCUMENT_TOKEN_TO_BE_REPLACED

Terence Blanchard looked around the restaurant table and launched into a gentle sermon about jazz education in Detroit that was part homily, part pep talk, … END_OF_DOCUMENT_TOKEN_TO_BE_REPLACED

Creating a program of solo piano music is the ultimate challenge for any improvising pianist. The music on my latest album, Ways of Disappearing (Sunnyside), … END_OF_DOCUMENT_TOKEN_TO_BE_REPLACED

First the good news: As you can see in our annual Festival Guide, there are plenty of jazz festivals scheduled to happen around the world … END_OF_DOCUMENT_TOKEN_TO_BE_REPLACED