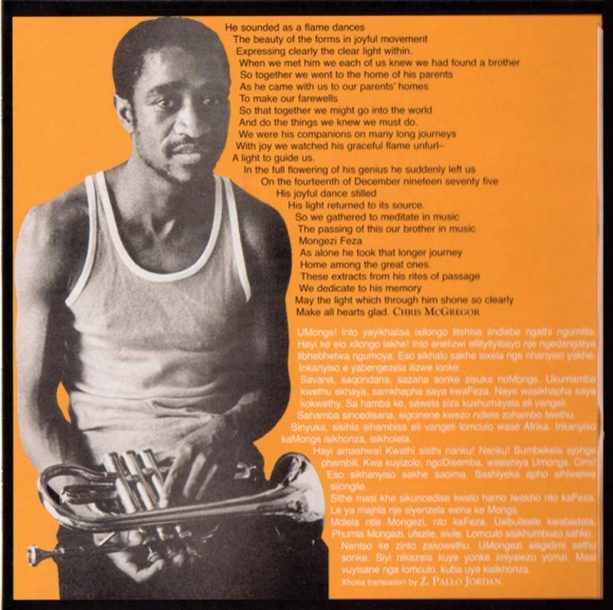 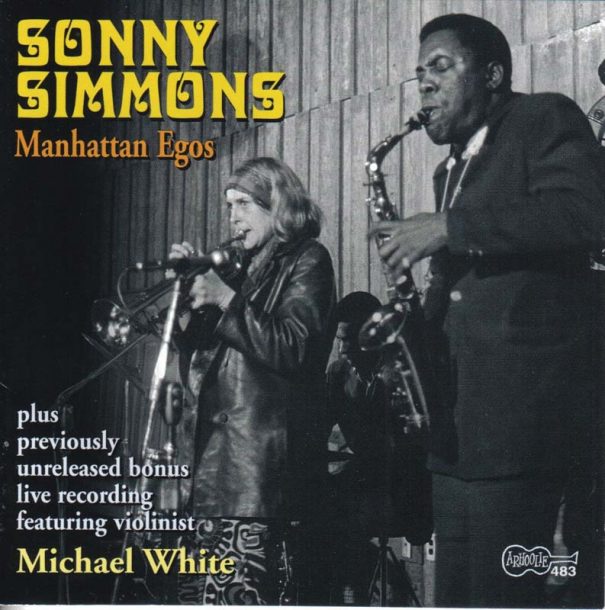 The history of creative music is too often simplified into a narrative that runs like a reading from Genesis: Armstrong begat Eldridge begat Gillespie begat Davis, etc. While I also bow at the altars of those geniuses, I would argue the music’s transformative power and diverse embrace is sometimes best represented by the outliers: artists whose backgrounds, life stories and aesthetics challenge the very notion that there can be any single model of creativity. Two heroes of mine on the cornet and trumpet, Mongezi Feza and Barbara Donald, demonstrate the extraordinary music made by characters who, for reasons of style or geography or gender, never fit into the establishment pantheon.

The first time I remember hearing Mongezi Feza-a solo jumping out from an old Brotherhood of Breath record-I was already in my late 20s, but I had that shock of recognition. He was doing most everything I wanted to do on the instrument but better: a delicious balance of buoyant melody and sonic abstraction, with fluid lines dissolving into streaks of pure sound; a fat, beautiful tone, but a willingness to explore the cracks and cries within it. Avoiding cliché while steeped in multiple traditions, Feza was a trans-idiomatic improviser before there was a term for it.

Feza was born in South Africa in 1945. While still a teenager, he hooked up with pianist Chris McGregor, saxophonists Nik Moyake and Dudu Pukwana, bassist Johnny Dyani and drummer Louis Moholo, forming the legendary group the Blue Notes. As an illegally interracial ensemble at the height of the apartheid regime (McGregor was white), they were subject to constant political pressure and harassment, and ultimately the band expatriated to Europe in 1964 and settled in London the following year. Moyake soon returned to South Africa, but the remaining five musicians became deeply influential and admired (if under-acknowledged) members of the nascent British and European free-jazz and improvised-music scenes.

In addition to continued work with the Blue Notes, McGregor’s big band Brotherhood of Breath and Pukwana’s bands Assagai and Spear, Feza collaborated with experimental rockers like Robert Wyatt and the band Henry Cow. He also formed a collective trio with Dyani and Turkish percussionist Okay Temiz, whose two-volume Music for Xaba serves as the purest example of Feza’s mastery in his sadly limited discography.

Feza died of untreated pneumonia while in a London psychiatric hospital in 1975, just 30 years old. In both England and South Africa, friends were furious at the institutional racism and neglect that contributed to his death. The surviving four Blue Notes reunited in the studio the week following Feza’s passing. The resultant recording, Blue Notes for Mongezi, is nearly three hours of uninterrupted, unrelenting improvisation, an incredibly powerful and heartfelt musical farewell to a fallen brother.

I was introduced to Barbara Donald on the 1969 Sonny Simmons recording Manhattan Egos. Donald and Simmons’ musical connection was near perfection; they navigated complex melodies with the telepathic ease of Bird and Diz or Coleman and Cherry, breathing and phrasing as one. Donald’s improvisations were stunning, a thrilling blend of risk and control. She was one of the few trumpeters with the facility to negotiate bebop articulation over free time and open harmony, and her bright sound cut through the ensemble, full of intensity without ever sacrificing a rich tone.

Born in Minneapolis in 1942 and raised in Southern California, Donald started playing at age 8 and displayed exceptional talent, but faced discrimination as a young female instrumentalist. She responded by forming her own bands from an early age, taking what gigs she could (whether R&B or rock ‘n’ roll or dance bands) and studying and performing with bebop masters like Benny Harris and Dexter Gordon.

In 1964 she met saxophonist Sonny Simmons, and they quickly became a musical and romantic pair. Simmons brought her into the world of post-Coltrane expressionism, while Donald gave him a partner who could match his intensity, virtuosity and passion. Between 1964 and 1972 they released a series of classic albums, including Staying on the Watch, Music From the Spheres, Burning Spirits and the aforementioned Manhattan Egos, but struggled to find any consistent work or financial stability while battling the racism they met as an interracial couple. With two children, they disappeared from the music scene for most of the ’70s to try to support their family, and separated in 1980.

Donald moved to Olympia, Wash., and her career had a brief rebirth in the early ’80s-she recorded two excellent albums with her band Unity (her only recordings as a bandleader) and mentored many younger musicians. However, a series of strokes in 1992 left her unable to play, and she spent her last 15 years in an assisted care facility before dying on March 23, 2013. Other than a single obituary in the Seattle Times by longtime supporter Paul de Barros, her death went unnoticed.

Mongezi Feza and Barbara Donald do not sound alike, nor do they sound like any other trumpet player; they are their own voices. Though they were contemporaries, I doubt they ever met or played together; I can’t find any documentation of Feza in the U.S. or Donald in Europe. Their outsider status (whether as a South African expat in Europe or a white woman in the midst of the Black Arts Movement) likely contributed to their relative obscurity, but despite the critical neglect and the moments of tragedy in each biography, their music endures and their brilliantly personal sounds continue to inspire. The path to creative music is never the same twice: Feza and Donald found their own way, and found the beauty in the journey. Please listen.

Taylor Ho Bynum is a composer, cornet player and bandleader, and the executive director of Anthony Braxton’s Tri-Centric Foundation. Visit him online at www.taylorhobynum.com.

Several years ago, one of Danilo Pérez’s students was suffering from tendinitis. Pianist Pérez was then a professor at the New England Conservatory; his student, … END_OF_DOCUMENT_TOKEN_TO_BE_REPLACED

As a JazzTimes writer, I can talk about the powers of a dynamic drummer until I’m blue in the face: the weight of each tom-tom’s … END_OF_DOCUMENT_TOKEN_TO_BE_REPLACED

There are certain works of art with which I wish I could have a conversation, so that I might express my gratitude for them. I … END_OF_DOCUMENT_TOKEN_TO_BE_REPLACED