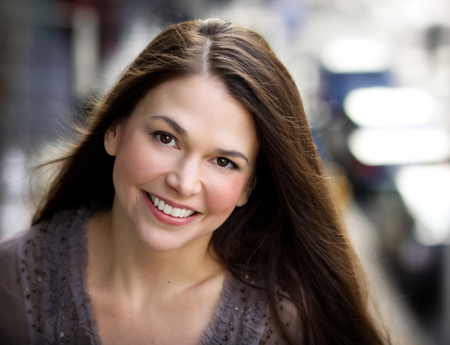 Towards the end of An Evening With Sutton Foster: Live at the Café Carlyle (Ghostlight), the diminutive Broadway star with the great big voice remarks that she was recently an answer on Jeopardy, then self-disparagingly adds that none of the three contestants could identify her. It’s a telling little tale. For, though Sutton has reigned as one of musical theater’s brightest and most bankable stars for nearly a decade, with five Tony nominations and one win to her credit, she has yet to achieve the mainstream popularity of, say, Patti LuPone or Kristin Chenowith. As, however, this sparkling hour-long set, captured on the closing night of Sutton’s two-week Carlyle engagement last summer, superbly demonstrates, she is every bit as deserving of widespread attention among not only Broadway aficionados but the cabaret crowd, too.

Foster, currently starring as evangelist-turned-chanteuse Reno Sweeney in the latest Broadway revival of Anything Goes (which might easily garner her a second Tony when the awards are handed out June 12), is as formidable a belter as Reno’s originator, Ethel Merman. Indeed, twice during the Carlyle show, first in her introduction to the Wicked hit “Defying Gravity” and again before her closing rendition of Dreamgirls‘ “And I’m Telling You I’m Not Going,” Sutton jokingly warns the Carlyle crowd to move back, lest the get blown away by the vocal firestorm she’s about to ignite. But unlike Merman Foster also has a softer, more delicate side that suggests the up-close-and-personal appeal of such fellow cabaret-cum-musical-theater champs as Bernadette Peters and Jessica Molaskey.

Throughout the set, Sutton balances show tunes and Tin Pan Alley gems, drawing heavily on selections from her 2009 album, Wish. Several of the show’s more delightful moments are autobiographical, including a triptych of New York-centric tunes – “Not for the Life of Me” from Thoroughly Modern Millie, “NYC” from Annie and “Astonishing” from Little Women – that mirrors her own Broadway ascension. (Though Sutton acknowledges that her role in 20th anniversary Broadway re-mounting of Annie was a minor one, playing “the maid in the background with the big teeth,” she actually launched her career playing the title role in a community theater production in her native Georgia).

Together with pianist and music director Michael Rafter and guitarist Kevin Kuhn, Sutton proves herself a cabaret natural, weaving an evening of music and storytelling worthy of such masters as Barbara Cook and Julie Wilson. There is an immutable sunniness about her, nicely tempered by moments of worldly sophistication. She is as comfortable trumpeting the disillusionment of “Down With Love” as she is burrowing into the soft folds of Frank Loesser’s “Warm All Over,” and can handle the coy suggestiveness of “The Late, Late Show” as easily as the peppy bounce of “I’m Beginning to See the Light.”

Musical theater enthusiasts will savor Sutton’s tender rendition of the lovely but obscure “More to the Story” (cut from Shrek: The Musical, in which she portrayed Princess Fiona, before it arrived in New York). But the polar-opposite showstoppers of this excellent set involve Sutton’s expert navigation of the double entendres that pepper Christine Lavin’s saucy “Air Conditioner,” and her superbly poignant blending of Sondheim’s “Anyone Can Whistle” and “Being Alive.”

If you’d like to share your comments about Sutton Foster, or have suggestions for future installments of Hearing Voices, please email [email protected]

Organ trios and quartets were ubiquitous by the mid-1960s. In African American neighborhood bars and clubs up and down the East Coast, throughout the Rust … END_OF_DOCUMENT_TOKEN_TO_BE_REPLACED

Terence Blanchard looked around the restaurant table and launched into a gentle sermon about jazz education in Detroit that was part homily, part pep talk, … END_OF_DOCUMENT_TOKEN_TO_BE_REPLACED

Creating a program of solo piano music is the ultimate challenge for any improvising pianist. The music on my latest album, Ways of Disappearing (Sunnyside), … END_OF_DOCUMENT_TOKEN_TO_BE_REPLACED

First the good news: As you can see in our annual Festival Guide, there are plenty of jazz festivals scheduled to happen around the world … END_OF_DOCUMENT_TOKEN_TO_BE_REPLACED