Skip to content
Become a member and get exclusive access to articles, live sessions and more!
Start Your Free Trial
Home > Features > Steve Lafler: Hooked on Jazz in the Bughouse 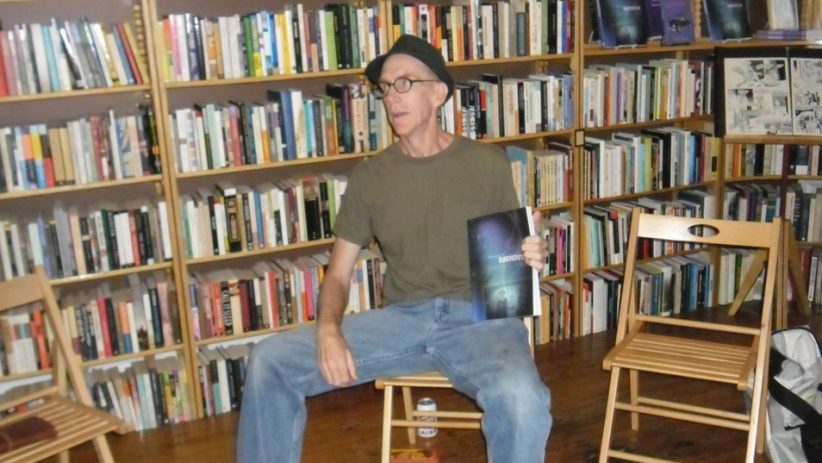 Steve Lafler studied painting and studio art at the University of Massachusetts. While there, he had a daily comic strip in the student newspaper. That is how he got his start.

“I don’t know why I am so hooked on jazz,” says Lafler, the 55 year-old cartoonist and graphic novelist, as he asks for an impromptu explanation of the modes and the pentatonic scale. Lafler is hanging out at Ada Books in downtown Providence, Rhode Island. He is currently on tour to promote his latest project: Ménage à Bughouse.

The 405-page graphic novel tells the story of Jimmy Watts, a tenor saxophone blowing hemipterum from Bug Town, USA. When he is young, instead of going to business school and getting a nice job on Wall Street—per his parents’ nagging—Jimmy Watts insists on going to music school and honing his music chops. “He’s in Bug Town,” says Lafler, “which is a stand-in for Manhattan. Just like when Miles Davis was a kid going to Juilliard … then he started hanging out with Charlie Parker and Dizzy Gillespie. Where is he going to learn more?” asks the author and cartoonist. “Hanging out at school or going uptown to Harlem and playing at Minton’s?”

Lafler adds, “I wanted to write about the transformation of swing to bop. There were so many cultural factors coming together that made that [transition] happen. [I was interested in] the way Miles Davis took cues from Charlie Parker and Dizzy Gillespie when he saw them playing with Billy Eckstine in St. Louis. Bughouse is about a young man dying to break loose from tradition—trying to do something else.”

While at school, protagonist Jimmy Watts befriends the pianist Slim Watkins. The two are eventually invited to play with the famous Buggy Eckstone (a stand-in for Billy Eckstine). Unfortunately, this leads to Jimmy’s becoming addicted to a deadly mind-altering substance known as Bug Juice. “It could be alcohol, it could be heroin,” says Lafler. The author says what most fascinates him about the career of famous artists is not necessarily their art but how they got to the top: “Take anyone who made it big. The interesting part is how they actually wound up there. Basically,” he explains about the Bughouse idea, “a musician [Jimmy] wants to get to the top of the heap but he becomes addicted to bug juice. In the creative life,” he explains, “there is always the lure of addiction. People use drugs and alcohol to self-medicate. Addicts are incredible at self-deception. The over-arching themes are the nature of the artist and the nature of the addict.” He continues, “I was very into the idea of defining characters. The trick was writing dialogue that would illuminate character.”

The material in Ménage à Bughouse is not new. In fact, the project began in 1993 and was finished in 2004. The three sections of the book that Steve Lafler is promoting now were originally released as three graphic novels on Top Shelf, published in 2000, 2002 and 2005, respectively. On Top Shelf, Bughouse sold more than 10,000 books. Recently, Lafler was approached by a publisher from CO2 comics who had the idea of publishing all three together as one wonderful Bughouse trifecta.

Even before his foray into the world of insect jazz and Bug Juice, Lafler always had the spirit of a jazz musician. This was evident in his “Dog Boy” cartoons that he worked on in the ’80s. “I was into the idea of improvising with comics, not with music.” He adds, “Usually the results were pretty good.”

In the introduction to the new Ménage à Bughouse, Lafler presents a brief essay explaining the creative pulse behind the project. He writes:

“…About six months prior, I’d read the shocking and lively autobiography of Miles Davis, the jazz trumpet giant of the 20th century. Miles was a supreme raconteur, spinning his narrative around the creative leaps of Charlie Parker, Dizzy Gillespie and many others as well as himself. He was the brilliant bad boy at the center of cutting-edge jazz, getting into hair-raising scrapes as a matter of course.

“It was more than synchronicity that David Cronenberg’s film adaptation of William Burroughs’ Naked Lunch appeared about the same time. Cronenberg’s film was a brilliant translation of the ethos of Burroughs’ work to film, underscored by a sublime Ornette Coleman soundtrack…”

He writes that Bughouse was born from his “fascination with the post-war NYC world that served as a backdrop to the Be-Bop and Beat movements…” He adds: “I was pregnant with intent to create a story set in that milleau.

“The intent gathered strength and spilled over into the physical world. I quickly sketched a tight little drawing of an insect saxophone player in a pin-stripe suit. I inked the drawing and had my first image of Jimmy Watts—the strutting saxophone genius, capable of explosive innovations at the drop of a hat, yet crippled by addiction to a substance known as Bug Juice.”

Today, Steve Lafler resides in Oaxaca, Mexico. You can contact him or see more of his work by visiting his site.

Several years ago, one of Danilo Pérez’s students was suffering from tendinitis. Pianist Pérez was then a professor at the New England Conservatory; his student, … END_OF_DOCUMENT_TOKEN_TO_BE_REPLACED

As a JazzTimes writer, I can talk about the powers of a dynamic drummer until I’m blue in the face: the weight of each tom-tom’s … END_OF_DOCUMENT_TOKEN_TO_BE_REPLACED

There are certain works of art with which I wish I could have a conversation, so that I might express my gratitude for them. I … END_OF_DOCUMENT_TOKEN_TO_BE_REPLACED