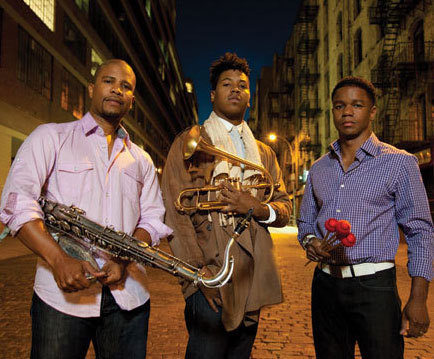 On Friday, the 29th of June, the Montreal Jazz Festival celebrated the second day of its 33rd year with an impressive list of artists playing on stages both inside and outside, some with pricey tickets and some shows absolutely free. For the right price you could take in the piano duo of Patricia Barber and Kenny Werner, the presentations of two of the greatest vocalists around, Esperanza Spalding and Melody Gardot, international guitar stars Philip Catherine or Pierre Bensusan and much more. I chose the much more by taking in shows by the Ninety Miles band featuring Stefon Harris, David Sanchez and Nicholas Payton, Stanley Clarke and the Harlem String Quartet and the Wayne Shorter Quartet. You can’t be everywhere at all times and one has to do the best they can to cover it all. After a day of cruising the festival grounds and feeding myself crepes and sausages to maintain my strength and purchasing rare music unavailable in the USA that I found in the festival merchandise kiosks to program on air upon my return home, I got down to the business of searching out two of the artists I would have the joy of seeing later in the night to get an idea of what I’d be hearing. I had some wonderful talks with two of my favorites, young vibes master Stefon Harris and the great Stanley Clarke, who would be celebrating his 61st birthday on Saturday. I would have had a conversation with Wayne Shorter but I’m not sure if what he would have had to say would have shed much light on what we would hear later in the day at his performance. More on that later, but first this.

At 6 PM I again found myself in the Club Soda to take in the first show of the night, this time featuring the frontline trio of Stefon Harris on vibes, David Sanchez on tenor sax and Nicholas Payton on trumpet as the group Ninety Miles. The group was completed by pianist Edward Simon, bassist Ricky Rodriquez, and drummer Henry Cole, from Puerto Rico and the percussionist from Cuba, Eddie Marrera . Nicholas Payton replaced the original trumpeter in the band, another horn man from New Orleans, Christian Scott, and Nick’s imposing figure and talent lifted the band to a high standard indeed. Stefon told me earlier in the day what an honor is was to be on stage with talents like Sanchez and Payton, and repeated from the stage how “brave” an artist Nick is. With Payton’s latest solo effort titled Bitches receiving such negative reaction, much of it from the title itself and the fact that he chose to vocalize on the project, he proved for all time that bravery was indeed something he possesses in spades. The band was born out of the project called Ninety Miles in which Stefon and his compatriots went to Cuba to collaborate with local musicians and let the musical chips fall where they may. They did not go to make a “Cuban” record but instead come up with what arose in the moment. That carries on today as the performance in Club Soda was more jazz than Cuban in the tradition of what the three principal musical characters have always made. The set began with two songs from the Ninety Miles recording and was followed by a Nicholas Payton song so this was a show by a band that is alive and evolving. It was quite an exciting night by a vibrant band. Stefon talked in our conversation about spending his future in educational endeavors for young students instead of any personal musical projects so this band may have a longer future than just the current tour.

After our trip to Cuba it’s again back to Montreal and off to the Place des Artes complex and the Theatre Jean-Duceppe, to hear the second of four different shows in a row featuring Stanley Clarke who was invited to put together these performances of his own choice in the festival’s “Invitation Series.” Stanley had spent some time with me in conversation after his sound-check with the artists The Harlem String Quartet to talk about his four shows at the festival and the future. He mentioned that Chick Corea had turned him on to this group. The Harlem String Quartet is one of those versatile groups a la the Kronos Quartet with classical, rock, jazz, etc. in their musical mix. They needed every chop they could muster to keep up with Stanley and his trio of Ruslan Sirota on piano and Ronald Bruner, Jr. on drums. Again, it was Stanley on acoustic bass only and with the cello and three violins of the Harlem String Quartet there was a beautiful celebration of strings all set long. I had seen the set list in Stanley’s hands while we spoke and knew they’d be doing Chick’s classic “No Mystery” as well as Stanley’s long form pieces “Paradigm Shift” and “The Toys of Men,” as well as others. The later song was my favorite of the set as it was performed in a fashion true to the original composition with no extended improvisational passages. Now I like great musicians improvising as much as the next guy. This is of course the essence of what jazz is all about, playing from your heart and soul in the moment, but too much reliance on one player after another taking their turn improvising for too long distracts me from enjoying the essence of the song itself. There may have been a bit too much of this in this performance for my taste, but don’t ask the rest of the audience about that. They seemed to be just fine with each one taking as much time as they liked to show off their individual talents. The show was a joy and a huge success!

After Stanley and crew I made my way next door to the Theatre Maisonneuve for The Wayne Shorter Quartet. I would have loved to have had a conversation with the esteemed Mr. Shorter to place some light on what we’d be hearing in the show on this second day of the festival, but I’ve only spoken to Wayne a couple of times in the past and he’s, shall we say, less than forthcoming with the simple truth in conversation. The first time I spoke to him was actually at the Montreal airport a few years ago at the baggage carrousel. I was just about to introduce myself in hopes of setting something up for a future interview while we were at the festival and he began speaking to me in the middle of a sentence that was like the answer to a question someone else had asked him. “The problem with the world now is that there are no leaders…” he was saying and things went on from there until we parted without establishing any future plans to converse. I bring this up because this was much like what I heard during Wayne’s performance on this evening. A listener seems to be sitting in on a conversation that is already in progress that never ends. This seems to be the nature of the incredible mind and creative spirit that is Wayne Shorter.

The only song written by one of the most prolific composers in jazz history, Wayne Shorter, that I can imagine being heard on this evening in Montreal was his classic “Endangered Species,” and that would have been from inside the Metropolis as performed by Esperanza Spalding who included a vocal version of the piece on her highly acclaimed Radio Music Society release which she was performing at the same time as Mr. Shorter and quartet played inside the Theatre Maisonneuve. Wayne was joined by an incredible group including Danilo Perez on piano and Brian Blade on drums. John Patitucci has been his bassist most recently but he was not present for this show and was replaced by another fine player who will remain anonymous since no words were ever spoken from the stage during the two hours of the show. The first piece lasted for over an hour and I’m sure the musicians knew exactly what “songs” they were playing as they referred to sheet music, cued one another with occasional nods, winks, grunts, smiles, laughs and other meaningful sounds and movements that we as a audience were not privy to. Wayne rotated between tenor and soprano sax so there was certainly method and structure in what appeared to be totally free music in nature. There were short passages of established melodies connected by passages of improvisation. The Montreal audiences are always a learned and experienced lot as a city with access to such varied culture is seldom surprised. They were attentive to the long form of each piece, three in total during the performance by my count, and roared with approval at the end of each. The thing that stands out to me as much as the music itself was the childlike attitude of pure wonder that seemed to appear on the faces of each musician on the stage, as if like a child they were experiencing this music for the very first time. This initiation experience kept the performance alive and lively and is the essence of jazz when one thinks of it. Compositions of a short, concise nature with a simple structure and groove for someone to tap your feet to, who needs them? Not Wayne Shorter and crew on this night in Montreal.

To find out more about what’s happening at the 33rd Festival International de Jazz de Montréal just visit the festival website. From Montreal, Russ Davis here…over and out for now.

Organ trios and quartets were ubiquitous by the mid-1960s. In African American neighborhood bars and clubs up and down the East Coast, throughout the Rust … END_OF_DOCUMENT_TOKEN_TO_BE_REPLACED

Terence Blanchard looked around the restaurant table and launched into a gentle sermon about jazz education in Detroit that was part homily, part pep talk, … END_OF_DOCUMENT_TOKEN_TO_BE_REPLACED

Creating a program of solo piano music is the ultimate challenge for any improvising pianist. The music on my latest album, Ways of Disappearing (Sunnyside), … END_OF_DOCUMENT_TOKEN_TO_BE_REPLACED

First the good news: As you can see in our annual Festival Guide, there are plenty of jazz festivals scheduled to happen around the world … END_OF_DOCUMENT_TOKEN_TO_BE_REPLACED