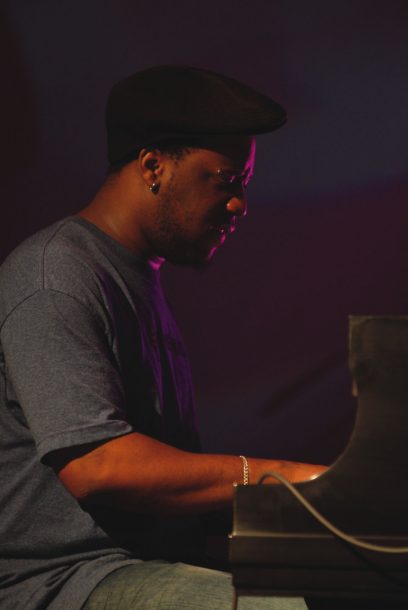 That was pianist Robert Glasper on his relationship with Blue Note Records, not long before the release of Canvas, his heralded label debut. Now two years later, Glasper has a sequel, the appropriately titled In My Element, along with a good deal more experience as a Blue Note artist. So what has changed during that time?

Aesthetically speaking, not a whole lot, judging by the continuity between Glasper’s releases. That’s one remarkable thing about his situation. Despite the pressures inherent in being a Major Label Artist, not to mention the only fresh-faced instrumental signing in Blue Note’s recent history, Glasper has been left to his own evolution. And in the overall scheme, that’s as it should be. The man said bodyguard, not chaperone.

But it would be disingenuous, maybe even preposterous, to say that Glasper’s label has served him only in a protective capacity. He has enjoyed the support of a promotional engine second to none in the industry, and the cachet of one of jazz’s titanium brands. His signing effectively bumped his trio into a new league-the majors, let’s say-as far as visibility and asking price are concerned.

Stories like Glasper’s are increasingly rare these days, as anyone in or around the jazz business will glumly attest. The very notion of a major-label instrumental jazz roster has come to resemble a quaint 20th century artifact, like Teletype machines or audiocassettes. The closest thing to a true new signing since 2005 actually took place at Concord, which used to be considered an indie label; trumpeter Christian Scott and pianist Taylor Eigsti received an enviable amount of attention for their respective label debuts last year.

Of course, the imprimatur of a major ensures nothing beyond some media promotion, a few obliging reviews and a modest budget (more modest, in some cases, than you might expect). And jazz musicians are now making albums through other channels; more of them, in fact, than anyone could ever need. The question, then: In the era of CD Baby and ArtistShare, does it still make sense to bemoan the decline of the major-label deal?

With apologies to Wayne Shorter, I’d argue “Yes and No.” Certainly the example of Glasper illustrates the upside of life in the majors. An even better example might be his fellow pianist Jason Moran, who has exercised full creative license as a Blue Note artist, upping the ante with each new release. And it’s evident that the artists who survived the jump from Warner Bros. to Nonesuch-guitarist Pat Metheny, saxophonist Joshua Redman and pianist Brad Mehldau-have all thrived in their present arrangements.

In the case of Blue Note and Nonesuch, as well as the German label ECM, it helps that there’s a powerful advocate aboard. Robert Hurwitz, president of Nonesuch, and Manfred Eicher, founder of ECM, operate their labels with a striking degree of independence, considering the corporate interests above. Bruce Lundvall, president and CEO of the Blue Note Label Group, has a roughly analogous situation with EMI, though not to the same degree.

“We have a tendency to want to stay with our artists,” Lundvall told me almost two years ago, when I was researching a feature on Glasper for JT. Citing one of the label’s longest-running active artists, tenor saxophonist Joe Lovano, he went on: “Many years from now, there’ll be a catalog that can be reissued for a long period of time. It’s a real annuity. You’re not going to sell millions of copies of any one particular album, but you can have a catalog, just as Alfred Lion built one that supports us today.”

It should be noted that in the time since Lundvall’s comments, Blue Note has quietly dropped two critically acclaimed artists, alto saxophonist Greg Osby and vocalist Kurt Elling. But the label also resuscitated the recording career of trumpeter Charles Tolliver, and encouraged the twilight renaissance of pianist-composer Andrew Hill. That track record, like the label’s recent releases by pianists Steve Kuhn and Kenny Werner, seems to indicate a new strategy, one more dependent on deserving talents than new discoveries.

Where does that leave those would-be discoveries? That’s where the “No” (see Shorter) comes into play. While Lundvall maintains that Blue Note is always on the lookout for new talent, most musicians seem to have a realistic grasp of those odds. Many of them start out on a label like Fresh Sound/New Talent, based in Barcelona. (Glasper’s effort on that label, Mood, is what earned him his Blue Note deal.) There are countless other options, including the increasingly viable path of what was once called a vanity label.

A lot of established artists now record for indies that could almost pass for mini-majors, like Palmetto, Songlines or Savoy. On a recent Sunday at the Village Vanguard, I saw a Sunnyside artist, saxophonist Chris Potter, play to an overexcited and oversold house; a considerably better crowd, I thought, than he used to draw when he was on Verve.

There’s good reason to presume that the Bad Plus will have similar success in their post-Columbia era: The group’s soon-to-drop next album, Prog, will inaugurate an indie label called Do the Math. (Heads Up International, a division of Telarc, will handle U.S. distribution; overseas, the Universal Music Group takes the reins.)

But therein lies the rub. Potter may not be on Verve anymore, but he was. And the Bad Plus reaped incalculable benefits from their association with Columbia, at least at first. If Glasper’s time is ever up at Blue Note, he’ll have had that experience and exposure on his side. The same can’t be said for everyone outside the orbit of the majors. Their struggle is what should worry us, much more than the infrastructure itself.

Organ trios and quartets were ubiquitous by the mid-1960s. In African American neighborhood bars and clubs up and down the East Coast, throughout the Rust … END_OF_DOCUMENT_TOKEN_TO_BE_REPLACED

Terence Blanchard looked around the restaurant table and launched into a gentle sermon about jazz education in Detroit that was part homily, part pep talk, … END_OF_DOCUMENT_TOKEN_TO_BE_REPLACED

Creating a program of solo piano music is the ultimate challenge for any improvising pianist. The music on my latest album, Ways of Disappearing (Sunnyside), … END_OF_DOCUMENT_TOKEN_TO_BE_REPLACED

First the good news: As you can see in our annual Festival Guide, there are plenty of jazz festivals scheduled to happen around the world … END_OF_DOCUMENT_TOKEN_TO_BE_REPLACED