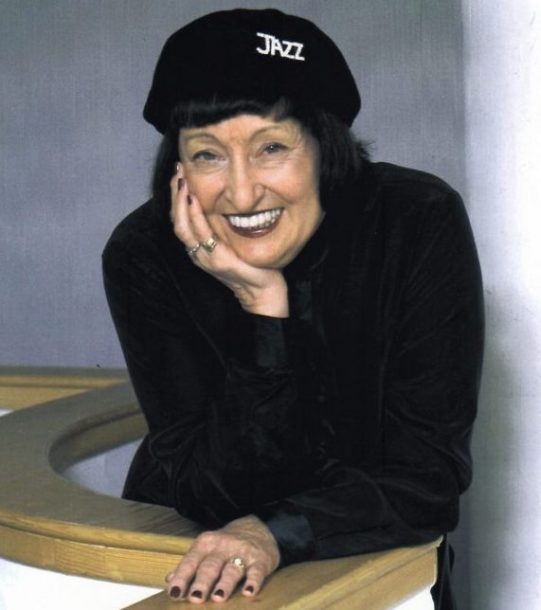 Sheila Jordan is a one-of-a-kind artist who possesses the power to captivate audiences, inviting all to join her on a magical mystery tour of jazz history. She is a native of Detroit, where she flowered from rich soil, and she wears the bloom of her youth proudly. The sounds of her upbringing serve as a springboard for her creativity and continue to inform all that she sings – even her interpretations of works by modern-day composers. She refuses to be fossilized in a style or placed in a time capsule. No bell jar for her.

I was lucky to catch Sheila at the Blue Note jazz club in New York, where she recently celebrated her 84th birthday. It reminded me of why I’ve loved her all these years. In my own teaching, I play Sheila’s version of “Falling in Love With Love” from her iconic recording, A Portrait of Sheila. I use it to demonstrate the art of improvising using lyrics-the development of chorus after chorus without scatting even one syllable.

Sheila the shaman possesses wisdom and healing powers. She galvanizes people behind the power of her music. She freely summons the spirits of jazz heroes past-especially vocalists-and re-casts them in a modern context. Her dedication to Bird makes her a full-fledged advocate, serving to introduce him to new generations of jazz fans.

Last season, Sheila was awarded distinction as a NEA Jazz Master. We now await a forthcoming book, Jazz Child: The Story of Sheila Jordan written in conjunction with Ellen Johnson.

If you’re getting the impression I’m a fan, you would be right. I consider her one of the greats.

Check out Sheila’s website for updates on performances and workshops.

Roseanna Vitro: What were your first memories of singing?

Sheila Jordan: Singing was my joy. It comforted me and helped me deal with unhappiness and fear. I loved singing and it loved me. I was born in Detroit, Michigan but my mother was barely 17 and she couldn’t raise me so she sent me to live with my grandparents in a small coal mining town in Pennsylvania. We were so poor we didn’t even have plumbing or heat in our home. There was a lot of alcoholism in my family. I am not putting them down. Alcoholism is a cunning, baffling, powerful disease.

I would visit my mother in Detroit every summer. I remember one time when I was about 3 or 4 years old she entered me in a singing contest at the Michigan Theatre. I think I sang “You Are My Sunshine.” I didn’t win but it didn’t matter to me. I just loved being on that big stage and doing what I loved best.

There was a great radio program at the time. It was called “The Hit Parade.” They played great composers most of the time. I heard George Gershwin, Cole Porter, etc. I loved that program. I learned so many songs from it. I would sing them at PTA meetings and musical programs at my school. I sang on some amateur shows also.

Did you study music in middle school and were there any teachers in particular who lit the creative fire in you?

I started taking piano lessons from my great Aunt when I was about 11 or 12. She was so mean. If you put your hands on the wrong keys, she’d hit them with a ruler. It really hurt and my knuckles would turn black and blue. So no more piano lessons for me.

I entered into my first year of high school in South Fork, Pa. We had a wonderful piano teacher. His name was Mr. Rushing. Mr. Rushing knew I loved to sing even though I had stopped for awhile because the local kids use to tease me and make fun of my singing. He arranged a spot on an amateur hour for me and another singer. I think the song was “My Ideal.” At some point, the other singer forgot the lyrics and I had to finish the tune all by myself. This helped me to get back to singing again. I always wondered if Mr. Rushing had something to do with the other singer forgetting the lyrics.

Were there other styles of music that inspired you as a young girl before you discovered jazz and which artists did you enjoy?

I liked the tunes of the day. I always sang “You Are MY Sunshine” as a kid. We had a program called the hit parade and when we had electricity, I would listen to the singers on The Hit Parade. I loved Bing Crosby, Giselle McKenzie and Rudy Valee. There was a private club in my little town called “The Bunt.” All the miners would hang out there and drink and sing. My grandfather would take me up there and I would get up and sing for them when they asked me. I loved singing so much.

How did the local scene shape your artistry and what advice would you give to today’s young singers?

I returned to Detroit to live with my mother when I was about 15. There was a hamburger joint near my high school and I would go there after class. They had a juke box and I remember seeing this one tune “Now’s The Time with Charlie Parker and the ReBopppers.” It intrigued me so I put my nickel in. After hearing the first three notes I was totally hooked. I said to myself “that’s the music I will dedicate my life to whether I sing it, teach it or support it.” What a revelation. I always sang but never knew what I wanted to sing until that life changing day. After that I found this club called “The Club Sudan.” It was a jazz spot for young people. They didn’t serve alcohol there. It was just a place for kids to play and sing, I met Tommy Flanagan, Barry Harris and Kenny Burrell there. They were just starting out. I also met two young Afro-American guys, Skeeter Spight and Leroi Mitchell. They were great scat singers. I wanted to sing with them. They said I could join them but I would have to stop drinking, a bad habit I had gotten into in high school. I stopped drinking and joined them. They wrote words to Bird tunes like “Confirmation,” “Little Willie Leaps,” etc. When Bird came to town we would be right up in front digging our man. He would ask us to sing. What a thrill. These experiences shaped me musically.

My advice to singers is: don’t forget your heart and soul. Emotions come first. Billie’s a great example of this. When I first heard Billie I thought that was the way the song went until I got the music and realized what Billie was doing. Her improvisations were so natural. Singers should get the original music and learn it the way it was written before they start improvising on tunes. Don’t give up is my motto. Support the music until it can support you. Maybe it never will but if you’re dedicated to this wonderful music you will find places to sing. I worked in an office for years because I had a daughter to support but I always found places to sing. It wasn’t until I was 58 years old that I worked full-time at music.

When looking back, who were the most influential musicians in your life and why?

Charlie Parker: The Bird. Bird was like my big brother. I loved his music so much I married his piano player [she jokes]. I learned to phrase from listening to his recordings.

Do you have any regrets and how have you dealt with failure or disappointments in your career?

I’ve had disappointments in life like anyone else but if things didn’t turn out the way I wanted them to I feel they still turned out for the best. I try to have a positive attitude. You know I didn’t start singing full time until I was 58 years old. I had a day job for years to support my daughter but when I was let go, that’s when I decided I would try to work full time as a singer and teacher.

It takes an incredible amount of tenacity to be a performer and teacher for as long as you have been dedicated to jazz. What do you attribute your longevity to?

Dedication. I told myself as a kid listening to Charlie Parker that I would support this music for the rest of my life. I persevered through racial prejudice and hard times but it never stopped my loyalty to the music or from being with my friends. Another rule I have lived by that I would advise to younger singers is: Don’t drink and drug. You may think you sound better, but it’s a lie, you don’t. You don’t need anything else but a clear head, the music and the dedication.

What are the important lessons you teach your students?

Dedication and believing in yourself is the key. Don’t try to sound like the famous singers, have your own thing. Be inspired but don’t copy. Have your own sound. Listen to Bird. I learned phrasing by singing with Bird, songs like “Quasimodo” which is the wonderful line he wrote over “Embraceable You” chord changes.

What are your current goals for the future?

Goals: Yes, I bought this house in upstate New York through Charlie Parker’s music. I paid for this house with money from my gigs. I have a huge barn that I call- “Charlie Parker’s Place.” I have the Charlie Parker street sign from the street in New York City, where he lived and that sign is on my barn. They gave me a copy of this sign when I sang at the first Charlie Parker Festival in Tompkins Square Park a few years back. My dream and goal is to present workshops and concerts in this barn. I would need a sponsor to support this effort. This would be such an amazing performance and study space, a destination for singers to come and work with me and other jazz artists.

1. Don’t feel competitive toward each other- it gets you nowhere …you’ll get angry with yourself. Music is not a competition.

2. Singers; Learn your melodies. Learning the melody notes of a tune are the stepping-stones to improvisation.

3. If you’re studying with a teacher who’s on a power trip, get another teacher. I’ve worked with so many singers with broken spirits because they were told they couldn’t sing. If you have a teacher who’s in competition with you, find a new teacher.

4. A scat virus is going around and there’s No Antibiotic for it. The antibiotic I have for this virus is bebop and Bird. Just remember you don’t have to scat to be a jazz singer. Why scat if you don’t enjoy it? Billie Holiday didn’t scat. The way Billie sang her melodies were her improvisations.

What an honor to speak with one of my all time favorite singers and to share her story and wisdom. Thank you, Sheila.

2008 Mary Lou Williams’ Women in Jazz for Lifetime of Service

In spring 1963, when Coleman Hawkins was 58 and making some of the most astonishing music of his career, he gave a short but revealing … END_OF_DOCUMENT_TOKEN_TO_BE_REPLACED

Forgive me if I’ve mentioned this before (perhaps repeatedly), but I’ve been playing guitar now for more than 40 years. So when the time comes … END_OF_DOCUMENT_TOKEN_TO_BE_REPLACED

Organ trios and quartets were ubiquitous by the mid-1960s. In African American neighborhood bars and clubs up and down the East Coast, throughout the Rust … END_OF_DOCUMENT_TOKEN_TO_BE_REPLACED

Terence Blanchard looked around the restaurant table and launched into a gentle sermon about jazz education in Detroit that was part homily, part pep talk, … END_OF_DOCUMENT_TOKEN_TO_BE_REPLACED