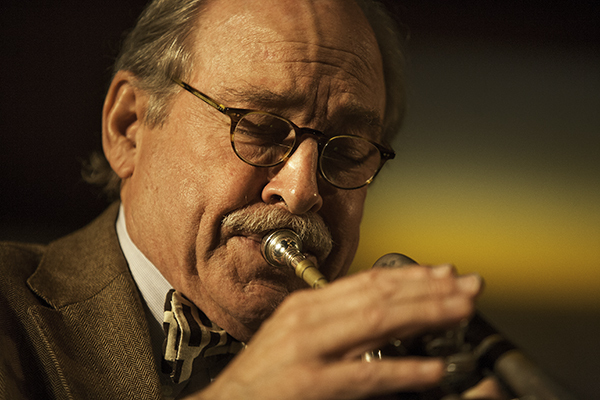 I teach seventh-grade English, which means I’m up at 5 a.m. and out the door by 6. While grading papers at my desk—with Duke or Pops playing softly on my portable CD player—I’m mentally (and physically, and emotionally) preparing myself for my 104 students. On most days I feel like Yul Brynner before his 3,267th performance of The King and I: confident, a tad tired, yet ready (and willing) to dive into the maelstrom once again.

That’s why Saturday mornings are so precious: no center stage, no mental (or physical, or emotional) preparation—just relaxation. Sounds perfect, doesn’t it? Well, perfection doesn’t arrive until I switch on Sirius/XM radio to hear Riverwalk Jazz, featuring the Jim Cullum Jazz Band.

This weekly show, broadcast from San Antonio, Texas, is a mix of scholarship (by Cullum and Don Mopsick), heart and hot jazz, with each week devoted to a theme. A recent show dealt with George Gershwin and his immense influence on jazz. With narrator David Holt interviewing pianist Dick Hyman, I was whisked from the sidewalks of 42nd Street at the 1930 premier of Girl Crazy—(Did you know that Red Nichols led the pit band? Neither did I!)—to the Gershwin penthouse overlooking Manhattan, where George composed so much of his immortal music.

Hyman then (fascinatingly) showed how Gershwin’s “I Got Rhythm” became the ur-text of future jazz tunes, demonstrating with Duke Ellington’s “Cottontail” followed by Charlie Parker’s “Anthropology.” My day already having been made, I was then treated to the most amazing version of “I’ll Build a Stairway to Paradise,” performed by Hyman and the Jim Cullum Jazz Band, who grounded the tune with a Jimmy Yancey boogie-woogie bass line! And I haven’t even mentioned Jim Cullum’s amazingly soulful cornet. Says the artist himself on his website, “I got serious about Louis Armstrong at fourteen and am still working on perfecting the cornet.” To these ears, Cullum has long ago reached his goal.

The Jim Cullum Jazz Band today includes Mike Pittsley on trombone; Evan Arntzen on clarinet and saxophones; Howard Elkins on banjo and guitar; John Sheridan on piano; Bernie Attridge (who has played with Benny Carter and Charlie Shavers) on bass; and rock-solid Benji Bohannon on drums. To these ears, they are crisp, swinging, and soulful—in a word, perfect.

Formed in 1962 by Jim Cullum Sr., the band was originally called the Happy Jazz Band. According to the writer Hal Smith, Cullum Sr. was a Dallas-born reedman who had worked with Jack Teagarden and Jimmy Dorsey. When the Happy Jazz Band was launched, he owned a wholesale grocery company. On cornet was his son Jim Junior—who worked in the family business and had a passion for the music of Bix Beiderbecke and Louis Armstrong. In 1963 San Antonio investors helped the Cullums to open a nightclub called the Landing.

Today the band plays five nights a week, from Tuesdays through Saturdays, at the Landing in the Hyatt Regency on San Antonio’s beautiful Riverwalk. (If you are ever in the area, it would be a crime not to go hear a set or five. For reservations call 210-223-7266.)

Their weekly radio show cuts between slices of fascinating history, with short clips of vintage music, to full songs by the Jim Cullum Jazz Band. Needless to say, these musicians are masters, playing hot jazz with heart, fire, abandon and beauty. It’s always been a dream of mine to have strolled through the doors of Chicago’s Lincoln Gardens in 1922 or 1923 to hear in the flesh the King Oliver Creole Jazz Band, with a young Louis Armstrong on second cornet. Well, when I’m listening to the Jim Cullum Band wail, I feel like I’m getting a taste of what that experience must have been like. They play the blues like nobody’s business and make the softer songs sigh. Over the years musicians such as Benny Carter, Clark Terry, Milt Hinton, Sweets Edison, Lionel Hampton, John Pizzarelli, Ken Peplowski and Jon-Erik Kellso have played with Cullum and his men.

If you want your Saturday mornings to be even more magnificent than they already are, check out Riverwalk Jazz. The band’s official website is JimCullum.com and you can hear pre-recorded broadcasts on the web at Riverwalk Jazz. Jim also has a marvelous blog called (marvelously) Le Blog Hot.

Pops and Bix must indeed be proud.

Terence Blanchard looked around the restaurant table and launched into a gentle sermon about jazz education in Detroit that was part homily, part pep talk, … END_OF_DOCUMENT_TOKEN_TO_BE_REPLACED

Creating a program of solo piano music is the ultimate challenge for any improvising pianist. The music on my latest album, Ways of Disappearing (Sunnyside), … END_OF_DOCUMENT_TOKEN_TO_BE_REPLACED

First the good news: As you can see in our annual Festival Guide, there are plenty of jazz festivals scheduled to happen around the world … END_OF_DOCUMENT_TOKEN_TO_BE_REPLACED

Steve Lacy was once a brilliant bebop player. Yet conventional wisdom says the opposite. Many have long argued that a key to the innovative soprano … END_OF_DOCUMENT_TOKEN_TO_BE_REPLACED