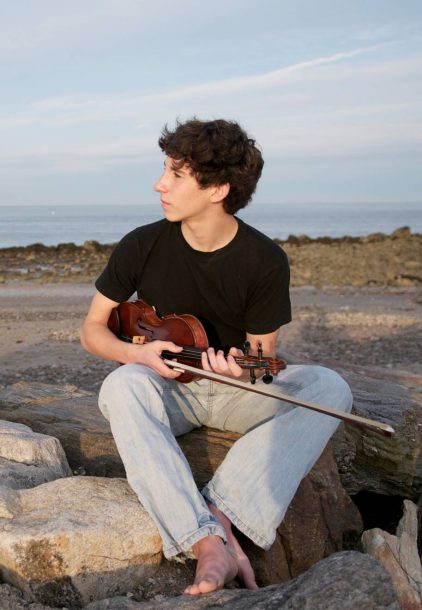 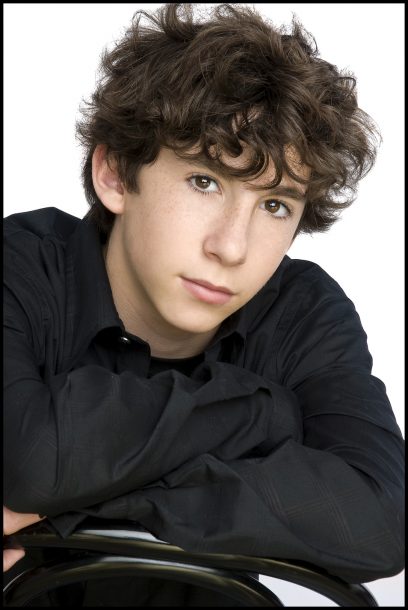 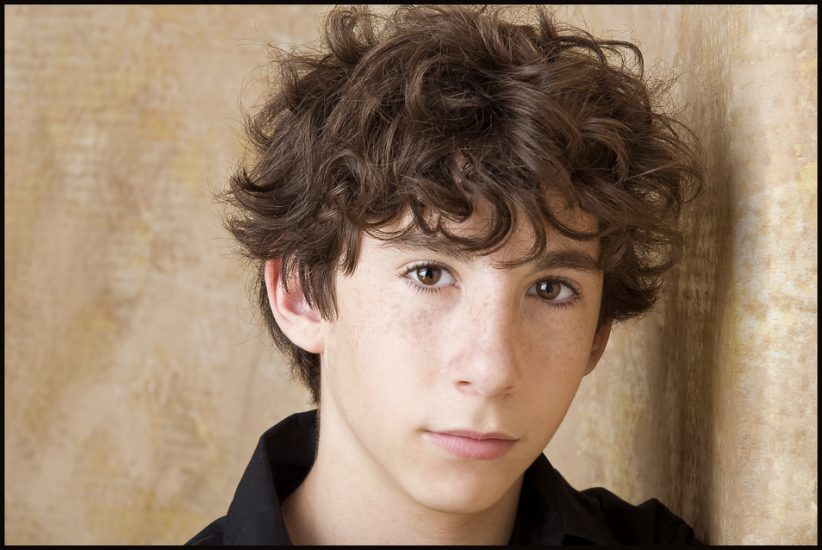 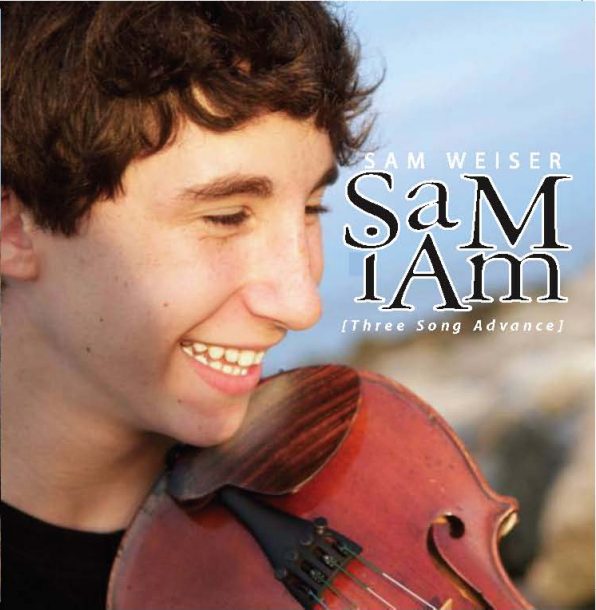 Violinist Sam Weiser seems just like any artist about to release his debut album. He’s excited to talk about the music and the genesis of the material. He’s a little anxious about the reception it will get. He’s looking forward to doing some live shows to play some of the material from the CD. However, unlike most debut artists, he also has math homework to deal with. See, that’s because Weiser is just 15 years old and still in high school. A sophomore to be exact. Or 10th grade. Remember what you were doing in 10th grade? No? Me neither. I can confirm that I wasn’t releasing albums. That I’d remember.

Weiser’s debut CD, Sam I Am, will be released on February 16, 2010 on Disappear Records. The album features a crazy quilt of musical styles, including gypsy jazz, swing, bebop, klezmer, Brazilian and folk. Weiser credits one of his mentors, Mark O’Connor, as well as his mother, for the broad range of styles he tackled on the CD.

In fact, I do think this is the first time that I’ve interviewed a subject and afterward asked to interview his mother too. (I may start making this a rule however as you get so much more information from that source.) But in the case of young Mr. Weiser, his parents are very much a part of his story, as they would be for any kid who still has to get rides to get to where he has to go (with apologies to my New York City friends who always need a ride).

Weiser said that he heard the violin for some time before actually playing it. “I heard my neighbor playing it for six months and I began begging my mother for a violin.” His mother, Tami, eventually gave in, and also enrolled him in a Suzuki method class. He was three years old.

Weiser said that his parents are not necessarily accomplished musicians. “My father likes to say that he plays the radio,” Weiser said, laughing. “My mother though is very musical, and listens to all kinds of music. She’s exposed me to so many different styles.”

His mother said that she thought Sam was an exceptional musician, but had a hard time separating parental pride from objective evaluation. “We didn’t know for a long time how far along he had progressed,” she explained. “There’s that ‘aah’ factor of a little kid playing anything pretty well and he was so cute. Then when he was ten, he was recruited by a conservatory. But he didn’t want to be just a musician. I think that idea scared him.”

Both Weiser and his mother agree on one thing: That his musical development took the largest leap as a result of attending Mark O’Connor’s summer camp for violinists. Weiser was just nine years old the first time he went. “I went to that camp knowing nothing, really. I had no experience in the world of ‘alternative’ strings. I didn’t know a world outside classical music. It really opened doors for me.” Weiser has gone back to the camp several times and has established close relationships with the great string players on the staff as well as his fellow students. “He had an epiphany,” his mother confirmed. “He realized, ‘I have a home with these musicians.’ He realized that he could try any kind of music. It was a revelation. They’d be jamming and he saw that, no matter what happened, he could have fun.”

It was also at O’Connor’s camp where Weiser first came into contact with the legacy of Daniel Pearl, the noted journalist brutally slain in Pakistan by Islamic fundamentalists in 2002. Pearl, who early on worked as a music journalist, was passionate about music and the Daniel Pearl Foundation was set up in part to promote and strengthen community through the universal language of music.

One of the foundation’s programs is the Daniel Pearl Memorial Violin, custom-made by Jonathon Cooper, which is lent to a worthy young musician for a year. Weiser was the recipient of the violin for 2008-2009. He said that the instrument was fantastic. “It sounded amazing,” Weiser remembered. “It’s hard to describe the clarity and tone.” In fact, Weiser was so taken with the instrument that he asked Cooper to make him a violin. And Weiser is donating profits from the album to the Foundation. For him, it’s simply a way of paying back their generosity and commitment to him as a young musician. His mother said that Pearl’s life and message got to Weiser. “He was so touched by that experience,” she said. “He got to meet the Pearl family and he really took it to heart. Now he wants to raise awareness of the organization and its mission.”

It was at FODFest (a music festival connected to Pearl Foundation) that Weiser met Sonia Rutstein, who encouraged him to make an album. She booked the time and produced the record, as well as contributed three compositions. The album also includes standards like “Lullaby of Birdland” and “Desafinado.”

Even a cursory listen to Weiser’s album tells you that this is no ordinary 15 year old. He’s truly a prodigy on his instrument, playing with a maturity and virtuosity well beyond his years and beyond the abilities of most musicians of any age. He moves from the gypsy swing of O’Connor’s composition “Gypsy Fantastic” to Bobby Timmons bop classic “Dat Dere,” as if changing a shirt. He even sings on a few cuts, including Eddie Vedder’s riveting “Rise Up” from the soundtrack of Into the Wild. Weiser said he heard that album from the Pearl Jam frontman while carpooling with a friend. “His mother loved that record. I had leaned to play the mandolin and wanted to do something on that. And I realized that that song is played on mandolin. So I figured it out.”

His mother said that Sam will spend oodles of time “figuring songs out,” and recalls him recently transposing a Cannonball Adderley tune to the violin. Right now he’s going through a heavy classic but modern jazz stage, absorbing the work of Coltrane, Hancock and other greats of the post-bop era. He also maintains a lesson and practice schedule related to his classical training. Weiser said that, “It’s definitely two different mindsets. With classical, good technique and tone are so important. But it’s also important to keep your mind open. That’s something I’ve learned from Mark [O’Connor] and Sonia.”

I know that reading this that you’d like me to tell you that Weiser is an egotistical brat, but in truth he’s anything but. Weiser is humble and he’s simply amazed that he gets to occasionally play with people like O’Connor or Darol Anger or John Blake. He most wants to attend a real college and study something other than music. “I’m really interested in music engineering.” His mother said that it was important that he not be drawn exclusively into the competitive world of conservatory studies. “He’s a regular kid who goes to public school. And we want to keep it that way.” Weiser’s parents deserve credit for inculcating him with the idea that he doesn’t have to be a famous musician to be successful in life. That it’s okay to simply enjoy the music and see where that takes you.

For now, the music is taking Weiser to a few appearances in the Northeast area before the release of his album and before heading back to high school for math and those other academic subjects most of us have largely forgotten. I like to think of myself as in 19th grade, but it doesn’t help much.

Here are his upcoming appearances:

February 14th 9:00pm Live in studio and streamed on web

Presented by Institute of Musical Traditions

Presented by Fanny’s House of Music
The Rutledge

Organ trios and quartets were ubiquitous by the mid-1960s. In African American neighborhood bars and clubs up and down the East Coast, throughout the Rust … END_OF_DOCUMENT_TOKEN_TO_BE_REPLACED

Terence Blanchard looked around the restaurant table and launched into a gentle sermon about jazz education in Detroit that was part homily, part pep talk, … END_OF_DOCUMENT_TOKEN_TO_BE_REPLACED

Creating a program of solo piano music is the ultimate challenge for any improvising pianist. The music on my latest album, Ways of Disappearing (Sunnyside), … END_OF_DOCUMENT_TOKEN_TO_BE_REPLACED

First the good news: As you can see in our annual Festival Guide, there are plenty of jazz festivals scheduled to happen around the world … END_OF_DOCUMENT_TOKEN_TO_BE_REPLACED