Skip to content
Become a member and get exclusive access to articles, live sessions and more!
Start Your Free Trial
Home > Features > “Rhapsody In Blue” at 90 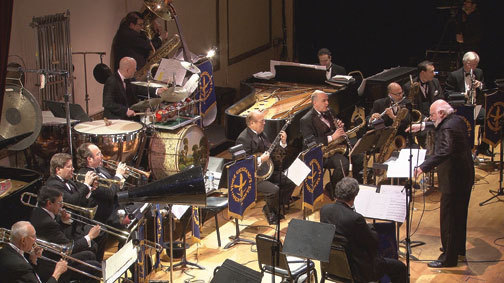 Within the past year, George Gershwin’s “Rhapsody in Blue” has introduced viewers to Leonardo DiCaprio in the title role of The Great Gatsby and helped transport the U.S. Olympic team to Sochi in a United Airlines advertising campaign. Despite its current ubiquity, however, its initial reception in 1924 was tepid. That year, Paul Whiteman’s Palais Royal Orchestra debuted the piece at Aeolian Hall near Manhattan’s Times Square, as part of a program dubbed An Experiment in Modern Music. On Feb. 12, the concert’s 90th anniversary and Lincoln’s birthday, the entire program was recreated at the Town Hall by conductor Maurice Peress and the Grammy-winning band Vince Giordano and the Nighthawks, featuring near-flawless performances by pianists Jeb Patton and Ted Rosenthal, with faithful renderings of the music of Gershwin, Jerome Kern, Irving Berlin and Victor Herbert. Violinist Andy Stein of A Prairie Home Companion fame played the role of Whiteman.

Joe Franklin, Liza Minnelli and several of Whiteman’s grandchildren were in attendance at the sold-out Town Hall show; Sergei Rachmaninoff, Jascha Heifetz and John Philip Sousa attended the 1924 performance a block away. A jazz-age anthem as interwoven into the fabric of American culture as Yankee pinstripes or Disney’s Cinderella Castle, prior to its canonization, critics of Gershwin’s opus chided the composer for its radical form and orchestration. “There was a guy between Gershwin and Mozart named Debussy who said, ‘Enough of this German form. I want to write music which is continually evolving.’ Debussy wrote his music that way, as did George Gershwin,” Peress told the audience. Peress, a conductor and professor at the Aaron Copland School of Music at Queens College, has a pedigree for the Aeolian Hall program, having worked extensively with Leonard Bernstein and Duke Ellington.

“Whiteman was a classical musician, and he wanted to continue that dream with American popular music with some touches of jazz,” says Giordano, who in addition to being featured on HBO’s Boardwalk Empire, performs every Monday and Tuesday with his Nighthawks at the Iguana in Manhattan. “I think Whiteman realized that he wanted to do more, to be able to take pop tunes and play them in a symphonic style. A lot of people today don’t understand what he was trying to do.”

Whiteman insisted that “Rhapsody in Blue” reflect the plurality and cosmopolitanism of American experience. Composing the piece when he was only 25, Gershwin supposedly completed it in five weeks after he was reminded about the approaching concert in the newspaper. The original score contained the notation “Wait for nod,” meaning Gershwin’s; in his haste, he allegedly improvised some of the piano part live. Gershwin didn’t even receive top billing, being listed after ragtime novelty composer and pianist Zez Confrey. “It was blending popular music with classical music and a newly emerging jazz form. It’s important to show the lineage of this kind of music to modern jazz,” says pianist Jeb Patton, who performs regularly with the Heath Brothers and played Confrey’s “Nickel in the Slot” and “Kitten on the Keys” at the Town Hall, among other knuckle-busters.

Where Confrey took his cues from a player piano or a cat, Gershwin’s rhapsody mimicked the sound of a locomotive. Like a train, Gershwin’s sprawling composition had more moving parts than Whiteman had musicians, even augmented with strings, but the band was so versatile that three reed players managed to play a total of 17 parts, including the oboe-like heckelphone, switching as the music dictated. The opening glissando originated when clarinetist Ross Gorman slurred the rubato introduction as a joke. Gershwin loved it.

By opening the piece in B-flat and modulating to an adagio section in the key of E—an interval known as a tritone and integral to the blues—Gershwin elegantly united the syncopated urban vernacular that would later populate Porgy and Bess and the comparatively pastoral European classical tradition without diminishing either, Peress says. The lilting part in E made it a rhapsody; the ragtime-inflected B-flat sections made it blue. In addition to the rail network that connected the great American cities, Peress says Gershwin’s tone poem was partially inspired by descriptions of modern art such as Picasso’s Blue Period. On a different canvas, he painted a sonic tableau of a cultural melting pot that was rapidly churning out the American songbook along Tin Pan Alley. “Gershwin is one of the shining lights. He composed, he was a virtuoso pianist, he orchestrated, he wrote extended works, he wrote songs. He did it all,” says Ted Rosenthal, who performed the piano solo at the Town Hall. ‘Rhapsody in Blue’ really exudes an American spirit and has an American aesthetic.”

It’s perhaps no coincidence that Whiteman chose the Great Emancipator’s birthday for the occasion; his inaugural experiment (there were eight in total) echoed historian Carl Becker’s book Our Great Experiment in Democracy, published that year. Despite the classical gatekeepers’ criticism, it was one of the first prestigious concert hall presentations of the multicultural polyphony of voices that would come to define American music. History remembers Whiteman largely for commissioning Gershwin’s “Rhapsody,” though at his peak of popularity, the portly violinist, bandleader and impresario was known as the King of Jazz. Yet contrary to what his surname might suggest, Whiteman’s influence as an advocate for black performers and composers deserves a place in the historical firmament. “People don’t know that Whiteman had immense respect and was vividly aware of where the music came from,” says Peress. “A lot of guys feel that Whiteman was an exploiter, but it’s not fair.”

In 1926, the year after F. Scott Fitzgerald’s jazz-infused Gatsby was published, Whiteman’s book Jazz paid deference to the music’s African American lineage: “Jazz came to America three hundred years ago in chains … priceless freight destined … to set a whole nation dancing.” The Aeolian Hall concert, recreated at Carnegie Hall in the spring of 1924, set the precedent for Benny Goodman’s iconic 1938 concert in the hallowed hall, the first major performance of an integrated band. (In that ensemble were members of the Duke Ellington and Count Basie orchestras, including saxophonist Lester Young.) Out of respect, Goodman asked Ellington to open for him, but he politely declined.

By 1938, Ellington had already established himself in Hollywood, on Broadway and on the bandstand, but he had not yet been accepted by the more racially inaccessible classical elite. Later that year, though, it was Whiteman who commissioned Ellington to compose the rhapsodic “Blue Belles of Harlem,” his first symphonic piece performed in Carnegie Hall, part of the eighth and final Whiteman experiment.

Earlier in 1938, Ellington had finally left the segregated Cotton Club after a decade-long residency. Through national radio broadcasts he made his name at the venue, but always had to enter through the back door. Five years later, in 1943, Ellington was finally invited to Carnegie Hall as a bandleader, where he premiered Black, Brown and Beige, partially inspired by Gershwin and expanding on ideas he had articulated in his earlier composition for the Whiteman program. This achievement was made possible in part because Whiteman had recognized his symbiotic relationship to Ellington. His musical debt to the brilliant composer was immeasurable, but Ellington owes some of his success to Whiteman’s vision, which, to borrow an Ellingtonian expression, saw beyond category.

The scope of that vision transcended Gershwin’s premiere at Aeolian Hall, pushing past genre conventions, and Peress and Giordano honored that legacy. “It’s remarkable that people are lining up out the door to come to this concert,” says Don Rayno, author of the two-volume biography Paul Whiteman: Pioneer in American Music. “Ninety years later, people are coming out to hear [this music] on a cold night in Manhattan.”

Organ trios and quartets were ubiquitous by the mid-1960s. In African American neighborhood bars and clubs up and down the East Coast, throughout the Rust … END_OF_DOCUMENT_TOKEN_TO_BE_REPLACED

Terence Blanchard looked around the restaurant table and launched into a gentle sermon about jazz education in Detroit that was part homily, part pep talk, … END_OF_DOCUMENT_TOKEN_TO_BE_REPLACED

Creating a program of solo piano music is the ultimate challenge for any improvising pianist. The music on my latest album, Ways of Disappearing (Sunnyside), … END_OF_DOCUMENT_TOKEN_TO_BE_REPLACED

First the good news: As you can see in our annual Festival Guide, there are plenty of jazz festivals scheduled to happen around the world … END_OF_DOCUMENT_TOKEN_TO_BE_REPLACED