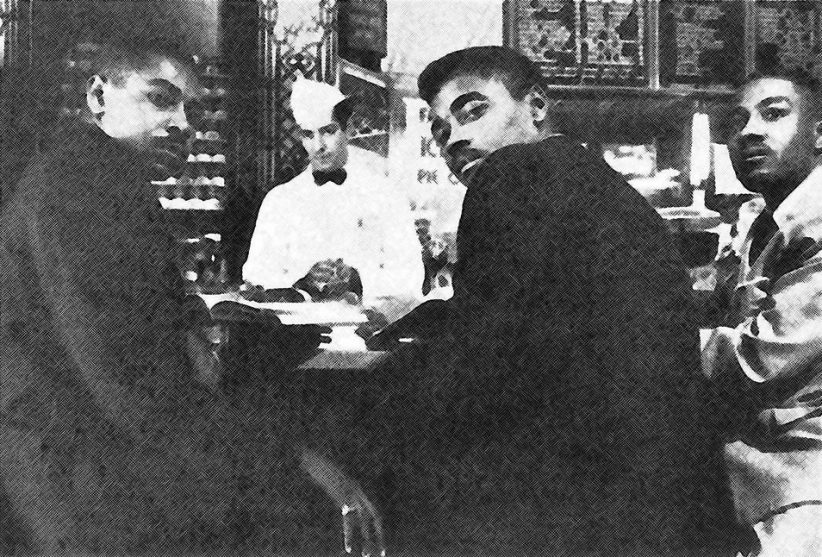 The Freedom Now Suite, written by drummer Max Roach and writer/singer Oscar Brown Jr. is perhaps the best-known jazz work with explicitly political content. Known primarily through the Candid recording We Insist! Freedom Now Suite, the album’s liner notes begin with a thunderous quotation from A. Philip Randolph: “A revolution is unfurling—America’s unfinished revolution. It is unfurling in lunch counters, buses, libraries and schools—wherever the dignity and potential of men are denied. Youth and idealism are unfurling. Masses of Negroes are marching onto the stage of history and demanding their freedom now!”

The album cover photograph commemorates the student lunch counter sit-ins that began in Greensboro, N.C., on Feb. 1, 1960, making explicit through visual means the link between the political events of 1960 and the subject matter of the Freedom Now Suite. The five movements of the work (“Driva’ Man,” “Freedom Day,” “Triptych: Prayer/Protest/Peace,” “All Africa” and “Tears for Johannesburg”) are organized as a historical progression through African-American history, a shape similar to the one in Duke Ellington’s Black, Brown and Beige. The Freedom Now Suite moves from slavery to Emancipation Day to the contemporary civil-rights struggle and African independence.

In the context of jazz, the question posed above has a special significance. But that wasn’t what I was thinking of as I asked it … END_OF_DOCUMENT_TOKEN_TO_BE_REPLACED

Taking up a brass instrument comes with specific difficulties in terms of development and maintenance. Entering the jazz sphere adds different weight and dimensions to … END_OF_DOCUMENT_TOKEN_TO_BE_REPLACED

You may notice a few changes in this issue of JazzTimes. Our design team has been hard at work again, coming up with a revised … END_OF_DOCUMENT_TOKEN_TO_BE_REPLACED