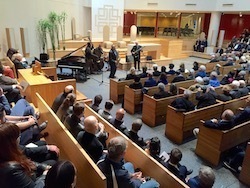 Editor’s Note: This article will appear in the upcoming December issue of JazzTimes. Enjoy this sneak peak now, before the issue hits newsstands!

Record executives, even those who are recognizable on red carpets and in the society pages, are not usually beloved. They’re tolerated, mostly; respected, maybe; and feared, definitely. But they aren’t often the recipients of the kind of candied reverence designated for grandfathers and high school mentors.

Bruce Lundvall, whose resuscitation of Blue Note Records in 1984 began the apex of a nonpareil career, deserved adoration, and he got it, both during his lifetime and after it ended in May of this year, following a battle with Parkinson’s disease. On Saturday, Oct. 3, at the jazz-steeped Saint Peter’s Church in Midtown Manhattan, Lundvall’s decades of musical service were honored with a lengthy yet brisk memorial concert, technically open to the public but wisely unpublicized. There were thoughtful, at times uproarious spoken remembrances, as well as performances that amounted to a brief history of American jazz since 1980-easily anticipated, given the resources, knowledge and enthusiasm with which Lundvall operated his company. Underscore enthusiasm: At his core, Lundvall was an unabashed bon vivant whose tireless dedication to his gig bled into a general world-view that valued culture and fellowship above all. He was always late but he was always generous, and his stories of old-school A&R elbow grease-hanging out at the club Bradley’s into the wee hours to sign pianist Jacky Terrasson before Verve nabbed him; taking a chance on the circuslike virtuoso talent that would become Bobby McFerrin-are worthy of a biopic, or at least a biography. (Thankfully, the jazz journalist Dan Ouellette has written a fine one.)

The performance highlights require another column entirely, but here’s an abstract. A procession of headliner-caliber pianists, including Terrasson, Robert Glasper, Jason Moran, Gonzalo Rubalcaba and Chucho Valdés, did Lundvall proud and genuflected before McCoy Tyner, perched in the front row. Kurt Elling and Norah Jones sang, the latter bypassing her hits for Horace Silver’s “Peace,” as did the excellent modern folkie Amos Lee. Some of the best living horn players completed the rapture: Greg Osby; Ravi Coltrane; Joe Lovano, who formed a mighty tandem with Valdés and an equally strong frontline with John Scofield; and Terence Blanchard, whose closing “Amazing Grace” made this secular writer feel a spiritual shiver.

As joyful and impressive as it all was, the afternoon came with an unexpected melancholy. For in many ways it was a celebration not only of Lundvall’s life but of a bygone era in the record industry. The presence of Blue Note’s current president, Don Was, provided a welcome reminder that the iconic brand is more robust today than even the most optimistic insiders might have projected six years ago. But there were also plenty of baby-boomer casualties of a stalwart business undercut by the freeloading and DIY amateurism the Internet has wrought. Surely there won’t be another Bruce Lundvall, because history won’t allow it.

Organ trios and quartets were ubiquitous by the mid-1960s. In African American neighborhood bars and clubs up and down the East Coast, throughout the Rust … END_OF_DOCUMENT_TOKEN_TO_BE_REPLACED

Terence Blanchard looked around the restaurant table and launched into a gentle sermon about jazz education in Detroit that was part homily, part pep talk, … END_OF_DOCUMENT_TOKEN_TO_BE_REPLACED

Creating a program of solo piano music is the ultimate challenge for any improvising pianist. The music on my latest album, Ways of Disappearing (Sunnyside), … END_OF_DOCUMENT_TOKEN_TO_BE_REPLACED

First the good news: As you can see in our annual Festival Guide, there are plenty of jazz festivals scheduled to happen around the world … END_OF_DOCUMENT_TOKEN_TO_BE_REPLACED