Skip to content
Become a member and get exclusive access to articles, live sessions and more!
Start Your Free Trial
Home > Features > Recollections of Satchmo, 1959 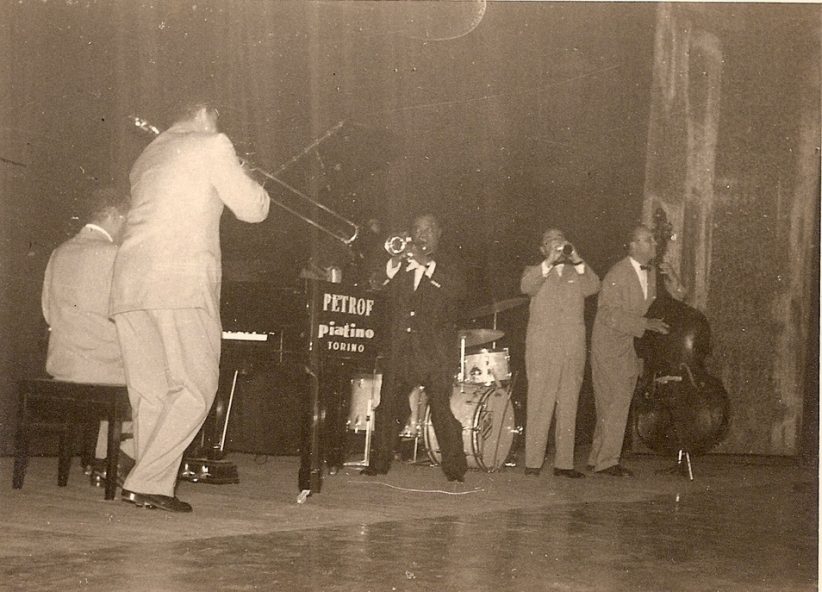 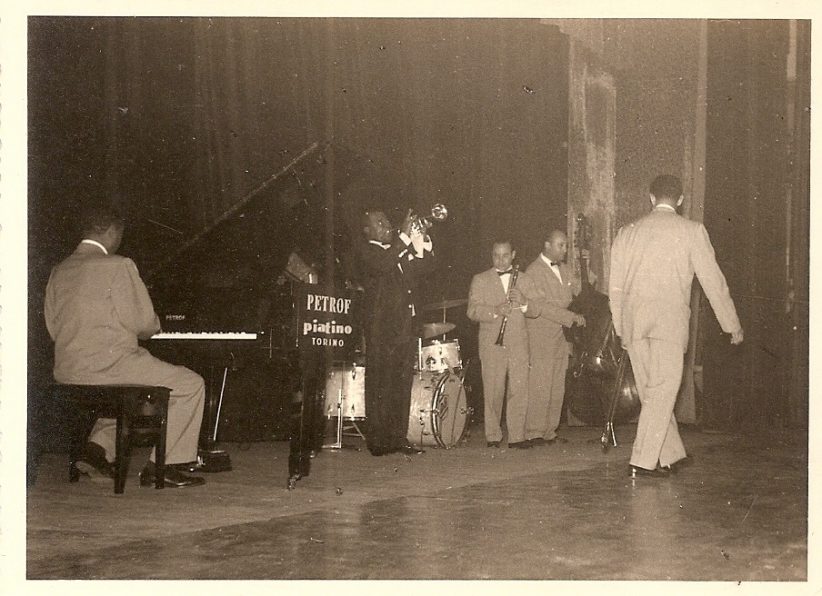 JazzTimes reader Girish Trivedi, of Mumbai, India, sent in some recently discovered photographs of Louis Armstrong performing in Italy. Below are Trivedi’s memories of that concert and a meditation on Armstrong’s legacy.

I recently found two pictures of the Louis Armstrong Sextet that I had taken from the audience on my Brownie, of a live concert that took place at Teatro Alfieri in Turin, Italy, on May 1, 1959. The group had Armstrong on trumpet, Trummy Young on trombone, Peanuts Hucko on clarinet, Arvell Shaw on bass, Billy Kyle on piano and Danny Barcelona on drums.

The memory I have of the eventful Armstrong concert in 1959 is that after his opening number, “When It’s Sleepy Time Down South,” his sextet played, among other compositions, “Muskrat Ramble,” “When the Saints Go Marching In” and “Tiger Rag.”

A “jaded” Armstrong at 57 was electrifying, and the majestic tone of his trumpet was never in doubt. However, his playing did not equal his Hot Five and Seven sides, recorded in the ’20s.

When Armstrong made his first trip to England, Nat Gonella, the English Dixieland trumpeter, was surprised to see Armstrong’s compact physical size, and wondered how such a small player could have such Herculean tone on the trumpet. Others examined Armstrong’s trumpet to see if there were any hidden devices that made his trumpet sound so loud and of mythical proportions in all registers.

In later years, Satchmo was called an “Uncle Tom” by Miles Davis and some others; however, given the realities of the times, when African-Americans were brutally segregated, Armstrong had little choice but to play up to his white audiences and to his enterprising manager, Joe Glaser, who promoted him but also fleeced him. This was uncharitable of Davis and Armstrong’s other detractors.

Before being exposed to Armstrong recordings in the early ’50s, I was already listening to hard-boppers Dizzy Gillespie, Clifford Brown, Howard McGhee, Fats Navarro and others. Later, when I witnessed Armstrong perform live, it opened up a whole new vista of the Dixieland- and Chicago-style playing of Bobby Hackett, Jimmy McPartland, Oran “Hot Lips” Page and swingers Bill Coleman, the Paris brothers and others. That said, it is quite clear that Roy Eldridge came out of Armstrong, Gillespie out of Eldridge and a whole host of trumpet players out of Gillespie.

Armstrong was a simple, charitable man, and his life revolved around his music,

his ladies, his food and his reefer. It is a crying shame that even though he toured extensively all over the world, Armstrong at his death left behind a piddly estate of a little over a half a million dollars, including his house in Corona, Queens, New York.

In my opinion, Armstrong invented jazz trumpet-playing and was the greatest granddaddy of them all, inventive, noble and soulful.

Organ trios and quartets were ubiquitous by the mid-1960s. In African American neighborhood bars and clubs up and down the East Coast, throughout the Rust … END_OF_DOCUMENT_TOKEN_TO_BE_REPLACED

Terence Blanchard looked around the restaurant table and launched into a gentle sermon about jazz education in Detroit that was part homily, part pep talk, … END_OF_DOCUMENT_TOKEN_TO_BE_REPLACED

Creating a program of solo piano music is the ultimate challenge for any improvising pianist. The music on my latest album, Ways of Disappearing (Sunnyside), … END_OF_DOCUMENT_TOKEN_TO_BE_REPLACED

First the good news: As you can see in our annual Festival Guide, there are plenty of jazz festivals scheduled to happen around the world … END_OF_DOCUMENT_TOKEN_TO_BE_REPLACED