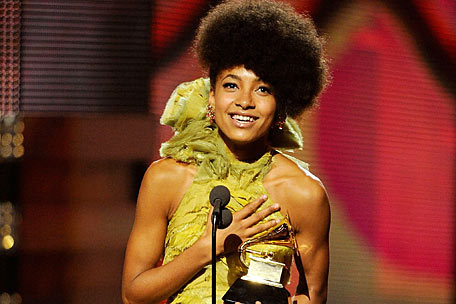 Esperanza Spalding seemed as shocked as everyone else when she won Best New Artist at the 53rd Annual Grammy Awards on Feb. 13. Hands clutching her heart, a million-watt smile lighting up her face, she looked positively breathless for a moment, though she was quick to regain her characteristic composure. It would be an understatement to call Spalding the dark horse in her coveted category, which most handicappers had already called in favor of either Canadian teen-pop moppet Justin Bieber or Drake, the Canadian hip-hop/R&B Casanova. (The Anglo-rock-with-ampersand vote was presumably split between Florence & the Machine and Mumford & Sons.) And yet the 26-year-old bassist and vocalist had already been busy on Grammy Sunday, hosting the pre-show telecast with Bobby McFerrin-they opened the festivities with a version of Eddie Harris’ “Freedom Jazz Dance”-and accepting many awards on behalf of absentees.

In recent years she had opened for Prince at Madison Square Garden; been the subject of a fawning profile in the New Yorker; and performed at the White House and the Nobel Peace Prize ceremony by request of her nation’s president. Still, her victory was, in some ways, even more startling than Herbie Hancock’s Album of the Year win in 2008, for River: The Joni Letters. Because, well, that was Herbie on Joni. Whereas countless Grammy viewers quickly asked themselves, or spitefully caviled on their social media platforms, who the hell is Esperanza Spalding?

You’re a JazzTimes reader, so I’ll presume you need no introduction.What interests me here is the extent to which Spalding represents the thrust of this current jazz era. Bear with me, and note the scare quotes, but she just might be the most prominent so-called “post-racial” jazz musician on the scene.

Allow me to explain. “Post-racial,” in case you haven’t heard the term, entered mainstream discourse around the time Barack Obama was beginning to seem like an actual contender for the White House, three or four years ago. Inspired partly by Obama’s own mixed-race heritage and, more saliently, by his above-the-fray elocutions, the phrase really stuck after his landmark speech on race in March 2008, and of course his subsequent installment on Pennsylvania Avenue. Among the tenets of “post-racial” theory is a conviction that our society has finally shed the baggage of racism and begun to realize that dream envisioned by Dr. King. Another tenet: that new generations are more heterogeneous and open, less inclined to see the world in black and white.

In a 2006 interview with Jazzreview.com, Spalding was asked about the ways her ethnicity informs her music. “I suppose invariably I draw from my cultural background,” she said, sounding as circumspect as a certain candidate on the campaign trail. “My music is just an extension of that. And, like most brown people in this country, I don’t know my exact ethnic heritage, but I do know that my family has Welsh, Hispanic and Native American roots in addition to the un-identified roots from Africa.” I’d submit that this perspective has at least something to do with the fact that Spalding is the jazz musician summoned most, so far, by the Obama administration. (Never mind her photogenic appeal, or that her given name means “hope,” a word of talismanic power during the 2008 presidential campaign.)

I actually thought of Spalding a couple of weeks before the Grammys, as I sipped my morning coffee and read a front-page New York Times article with the headline “Black? White? Asian? More Young Americans Choose All of the Above.” The story, part of a series pegged to the results of the 2010 U.S. Census, heralded an upswing in mixed-race pride, particular to our time. “Many young adults of mixed backgrounds are rejecting the color lines that have defined Americans for generations in favor of a much more fluid sense of identity,” wrote Susan Saulny. She could almost have been talking about Spalding-or, for that matter, me. Like Obama, I was born and mostly raised in Hawaii, the only state in the union where being white-“haole,” in local parlance-can be a social liability. I grew up self-identified, and effectively labeled, as “hapa haole,” or “half white,” often with a playfully derogatory sting. When I moved to the East Coast, I brought with me a deep respect for the complexities of race among musicians, club owners and critics. But I believed that ability speaks for itself. Still do.

As it happens, the same morning that I read the mixed-race story in the Times, I perused the jazz blogosphere and discovered two rejoinders to a newish book by trumpeter Randy Sandke, Where the Dark and the Light Folks Meet: Race and the Mythology, Politics, and Business of Jazz (Scarecrow Press). The blog posts were by Ethan Iverson, the pianist in the Bad Plus (dothemath.typepad.com), and David R. Adler, a regular JazzTimes contributor (blog.adlermusic.com). Both took issue with the premise and particulars of Sandke’s argument, suggesting an ax-grinding agenda. Later, reading Sandke’s interview with this magazine’s Lee Mergner, I noted his summarizing claim: “Jazz, which once led society in terms of integration, got swallowed up in the same divisive racial and non-musical issues that divided the country through most of its history.”

That must be the truth from Sandke’s vantage, but almost everywhere I look I see as strong an integrationist wave in jazz as ever. I see bands that aren’t just racially mixed, but engaged in reciprocal exchanges, bridge-building, style-blending. And I see more and more musicians like Spalding, who draws on her own diverse heritage even as she reaches out-to Cuba, to Brazil or to wherever else she recognizes something she can use.

But of course the perils of any “post-racial” paradigm are as unsavory in the music world as in our political sphere, where the reality of a black president seems to have legitimized ugly white grievance. Among the many hostilities I saw on Twitter in the moments after Spalding’s victory was one that put a different spin on bridge-building, from a self-proclaimed Bieber fan: “Dear Esperanza Spalding, Buy a rope, build a bridge and hang your self [sic] off of it like a Christmas decoration. Then go to hell. Love, Beliebers.”

I hope Spalding hasn’t grown accustomed to this sort of vitriol, even now. And I hope that, whatever else happens, and whatever you may think of her, she holds fast to her ideals as someone beyond category, seeking out her most honest expression in the music.

Organ trios and quartets were ubiquitous by the mid-1960s. In African American neighborhood bars and clubs up and down the East Coast, throughout the Rust … END_OF_DOCUMENT_TOKEN_TO_BE_REPLACED

Terence Blanchard looked around the restaurant table and launched into a gentle sermon about jazz education in Detroit that was part homily, part pep talk, … END_OF_DOCUMENT_TOKEN_TO_BE_REPLACED

Creating a program of solo piano music is the ultimate challenge for any improvising pianist. The music on my latest album, Ways of Disappearing (Sunnyside), … END_OF_DOCUMENT_TOKEN_TO_BE_REPLACED

First the good news: As you can see in our annual Festival Guide, there are plenty of jazz festivals scheduled to happen around the world … END_OF_DOCUMENT_TOKEN_TO_BE_REPLACED