Skip to content
Become a member and get exclusive access to articles, live sessions and more!
Start Your Free Trial
Home > Features > Philly Comes Together for Odean Pope 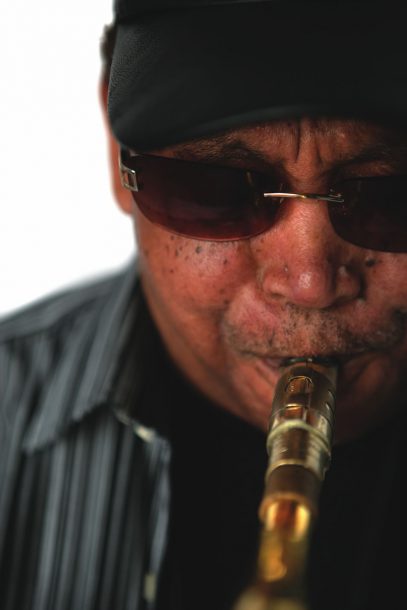 I’m sure this kind of thing happens in every city with a vibrant arts community, but for some strange geocentric reason, I believe the Philly jazz community tops them all when it comes to people putting their hearts in gear to celebrate one of their own. Luminaries like bassists Reggie Workman and Jamaaladeen Tacuma, saxophonists Bobby Zankel and Walter Blanding, bassists Lee Smith and Gerald Veasley, the pianist Kenny Barron and guitarist Monnette Sudler, the perennial saxophonists Bootsie Barnes and Tony Williams, poet Sonia Sanchez and comedian Bill Cosby-all lined up to appear at the tribute and benefit at the Philadelphia Clef Club on Monday, March 21st, for saxophonist Odean Pope, a musician who had struggled for 30 years with bipolar disorder-a struggle he thought he was keeping secret from his friends. But over the years, everyone was well aware that Odean had his dark moods and incomprehensible highs. He just didn’t know we knew. And we didn’t have a name for it.

When the heavy curtain of secrecy is lifted to reveal the proverbial elephant in the living room, all the reluctant participants in the secret finally joyously celebrate. Like Socrates’ belief that an individual’s unexamined life is not worth living, that philosophy also pertains holistically to a community of artists, and proof was certainly evident at last Monday’s tribute. A deep, collective (and giddy) sigh of relief expressed itself in some glorious music. After all the years of tension from the silence, of not saying and not knowing; the release was transcendent.

On the big night, I was in the ticket booth madly grabbing money, support was streaming in as over 250 old friends and young pups wanted to see and celebrate the Philly jazz community (it wasn’t just about Odean, jazz benefits never are just about the honoree). Bassist Joe Kearney, in a wheelchair from recent surgery, asked me to tell Bootsie he wanted to visit for a minute-it had been so long. A young guitar student hung out in front waiting for me to drop the price to $20. A saxophonist (who shall remain nameless) flirted with a volunteer who was also taking money and tickets. Wendy Simon, jazz singer and co-founder of Jazz Bridge, tore tickets in two at the entrance and reveled in the smiles coming toward her; while board member, jazz promoter Kim Tucker, like an army general, made sure everyone was lined up properly prior to pouring into the theater. Musicians took their places in the main room and on the fourth floor-it was going to be music top to bottom.

On the main stage, educator Lovett Hines had all his kids from the Philadelphia Clef Club Youth Ensemble ready to go. Within moments they were warming up on the Wayne Shorter tune One by One. Astounded drummer Jim Miller breezed by me afterward moaning that he wished his college jazz majors played like that. Drummer Craig McIver nodded in agreement.

Stage manager Graziella D’Amelio watched Gary Steuer, from the Philadelphia Office of Culture and Creative Economy, as his mouth dropped to the floor while the kids played. Even though I was still making change up front, I have no doubt that Graziella had that familiar yo-duh look on her face that said, “You mean you didn’t know about this great creative incubator here, Gary? That we have some of the best jazz students in the world right here?” To prove her right, alumnus and drummer Justin Faulkner, was ubiquitous that night playing with Lee Smith, George Burton, Bobby Zankel, and then later with Jamaaladeen Tacuma (who Graziella impishly told to arrive at an earlier hit time to make sure he’d be on time).

Poet Sonia Sanchez demurely made her way up to the main stage when it was her time to accentuate the evening. Fishing for her glasses in her purse, she asked Graziella where she should stand. Then this petite activist, who has cut through the consciousness of generations, took her place in the limelight with bassist Warren Oree. These two veterans hadn’t played together before, but this is jazz-it don’t matter. Sanchez’s affection for Odean danced off her tongue while Oree matched her every syllable: “I didn’t say professor / I said Dean / I didn’t say clergyman / I said Pope.”

Then comedian Bill Cosby walked through the merry gauntlet that was stage left (there is no stage right at the Clef Club). One has to imagine this: All along the corridor from the front entrance of the theater to the back of the stage was crammed with people, and as one got closer to the stage, the crowd became just musicians, closer still and up the ramp to the stage, musicians who had played or who were going to play were seated in a row in chairs against the wall watching the action.

Graziella tried mightily to get folks to move off the side of the stage to allow Cosby some room as he came up the ramp, but Bill would have none of it, basking in the accolades while high-fiving his old buddies from the neighborhood-saxophonist Tony Williams, drummer Mr. C (the late Trudy Pitts’ husband), Odean and his wife Cis.

Then as Cosby made himself comfortable onstage and scatted, trading fours with a saxophonist Tony Williams, Wendy and I made our way slowly through the corridor jammed with people, up the ramp, and stood waiting to go on to talk about Jazz Bridge. Drummer Dave Gibson smiled and waved at me from a chair along the wall; Wendy worried out loud about speaking to the crowd while loving all the musical energy around her; Graziella looked a bit frazzled but very happy (stage managing jazz musicians ain’t for sissies)-then Cosby brought Odean up. He spoke courageously about his bipolar condition for a few minutes. Then, all alone onstage, Odean lifted his instrument to his lips and launched into the most exquisite saxophone solo I have ever heard.

What the crowd did the instant Odean started playing reminded me of when Tug McGraw clinched the Phillies 1980 World Series by striking out Willie Wilson of the Kansas City Royals. I was there and had never heard such a monstrous amount of people grow so incredibly quiet as McGraw pitched that last out. That’s what happened when Odean spoke to everyone in the Clef Club that night through his horn. Gave me chills that I was standing there, so close, watching and listening, a part of the moment with everyone else.

For ideas about future stories about the Philadelphia jazz community – its artists, events and organizations – feel free to e-mail me at [email protected]

Organ trios and quartets were ubiquitous by the mid-1960s. In African American neighborhood bars and clubs up and down the East Coast, throughout the Rust … END_OF_DOCUMENT_TOKEN_TO_BE_REPLACED

Terence Blanchard looked around the restaurant table and launched into a gentle sermon about jazz education in Detroit that was part homily, part pep talk, … END_OF_DOCUMENT_TOKEN_TO_BE_REPLACED

Creating a program of solo piano music is the ultimate challenge for any improvising pianist. The music on my latest album, Ways of Disappearing (Sunnyside), … END_OF_DOCUMENT_TOKEN_TO_BE_REPLACED

First the good news: As you can see in our annual Festival Guide, there are plenty of jazz festivals scheduled to happen around the world … END_OF_DOCUMENT_TOKEN_TO_BE_REPLACED