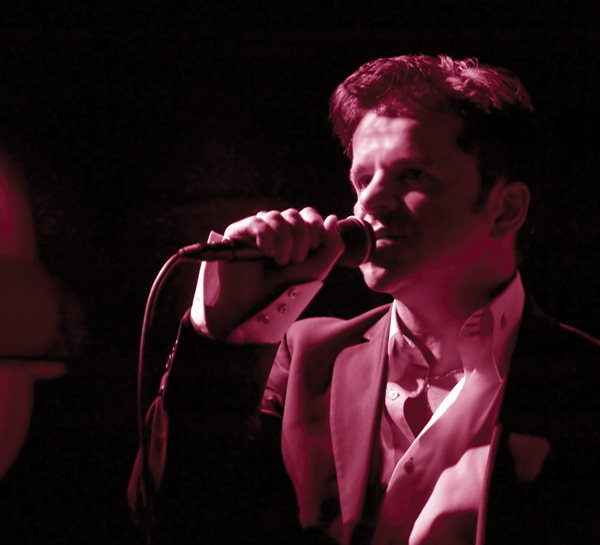 Like Beyoncé, Bjork and Bono, he goes professionally by just one name: Pascalito. It sounds Italian, but he is French, originally from Paris, where he was born Pascal Sabattier. A dozen years ago, while still in his late twenties, he relocated to New York. Raised by musical parents on a varied diet that extended from Henri Salvador and les deux Charles, Trenet and Aznavour, to Chet Baker and Tony Bennett, he is a bandleader, songwriter and vocalist, or as he bilingually bills himself, a “world chanteur.”

Many a Manhattan-based jazz singer can provide detailed analysis of the risks inherent to their chosen path. Perhaps, though, Pascalito is the only one who can do so systematically. Like so many of his vocal confreres, he must support his artistry with a day job. He is a risk analyst for a major investment bank (which, given Wall Street’s recent travails, may actually be a more perilous profession than jazz singer).

Pascalito’s debut album, Le Blues d’Orphée appeared in 2007. Sung entirely in French, it proved an ideal showcase for his light, rich voice. In true Aznavour spirit, he is at once a fine pop-jazz stylist and a superb storyteller, as demonstrated across a playlist that extends from classics, including a splendidly tender reading of Jacques Brel’s “La chanson des vieux amants,” to such familiar-in-translation pieces as “Les feuilles mortes,” Trenet’s “Que Reste-t-il de nos amours” (“I Wish You Love”) and the title track, the French version of the Brazilian gem “Manha de Carnaval.” Again like Aznavour, he does not shy away from grand, and often flashy, moments of showmanship, transforming “Fever” (which, en Français, becomes the exceedingly more predatory “la fiévre animâle”) into a stealthy exercise in libidinous pursuit, complete with jungle noises, echoing the Pet Shop Boys with the dance-floor fervor of his Halloween-themed “La citrouille de Toussaint” and taking “Donne lui du rêve” (Dave Frishberg’s “Peel Me A Grape” in liberal translation) to fresh hedonistic heights.

Four very different, though consistently intriguing, covers complete Neostalgia‘s luxuriant tapestry. “Here Comes the Rain Again” swaps the pounding storm of the Eurythmics’ original for the gentlest of mists. “Boulevard of Broken Dreams” is fitted to a stealthy bossa beat, and Caetano Veloso’s “Luz do Sol” loses none of its tender luminosity when converted to “Soleil d’Or.” Most arresting, though, is the closing track, a softly rapturous reimagining of Alex North’s “Love Theme from Spartacus” dedicated to his dear friend and fellow multicultural music anthropologist Tessa Souter.

If you’d like to share your comments about Pascalito or have suggestions for future installments of Hearing Voices, please direct your email to [email protected]

Organ trios and quartets were ubiquitous by the mid-1960s. In African American neighborhood bars and clubs up and down the East Coast, throughout the Rust … END_OF_DOCUMENT_TOKEN_TO_BE_REPLACED

Terence Blanchard looked around the restaurant table and launched into a gentle sermon about jazz education in Detroit that was part homily, part pep talk, … END_OF_DOCUMENT_TOKEN_TO_BE_REPLACED

Creating a program of solo piano music is the ultimate challenge for any improvising pianist. The music on my latest album, Ways of Disappearing (Sunnyside), … END_OF_DOCUMENT_TOKEN_TO_BE_REPLACED

First the good news: As you can see in our annual Festival Guide, there are plenty of jazz festivals scheduled to happen around the world … END_OF_DOCUMENT_TOKEN_TO_BE_REPLACED