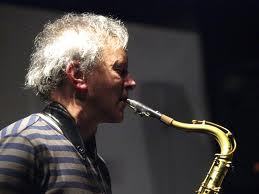 Multireedist and guitarist Doug Wieselman hasn’t lacked for company in the past 30 years. He’s played with the Lounge Lizards, Lou Reed, Laurie Anderson, Tricky, Butch Morris, Cibo Matto, Karen Mantler, Martha Wainwright, Antony and the Johnsons, CocoRosie and more. His associations with pianists Wayne Horvitz and Anthony Coleman, trumpeter Steven Bernstein and others date back to the pre-Knitting Factory years of the New York Downtown scene. He’s done theater and soundtrack work, including 80 episodes of the children’s animated series The Backyardigans.

On From Water (88), however, Wieselman is heard all alone. Playing vintage Albert system clarinets, he offers a live-looping, subtly amplified solo recital with an intimate aesthetic, mysterious yet melodically direct. Released on vinyl and digital only, the record takes inspiration from sounds Wieselman heard while visiting various bodies of water. “I first heard [the sounds] when I was in these hot springs in Salmon, Idaho,” he says. “I thought I was hearing an African choir. The closest approximate thing that I’d heard was those early King Sunny Adé records where there’s a bunch of voices singing, the first juju music. As I tuned into it, I started hearing it on the beaches, from streams, in the wind. You really have to get rid of everything else that’s going on. It’s like a meditation.” One piece on From Water, “Tennessee Valley (Choir),” features an actual choir-11 voices, including the duo from Cibo Matto-in an attempt to capture the water sound at its truest.

“I’ve been with Doug on a lot of those beaches where he’s heard that music,” says Bernstein, who swears by Wieselman in the reed section of his Millennial Territory Orchestra. “I’ve sat with Doug at many a river and ocean while he’s sitting there hypnotized, trying to figure out the song. He’s been doing this a long time.”

Wieselman performed the From Water material twice in early 2014-first at Manhattan’s amply sized Le Poisson Rouge, then in Brooklyn at the tiny Barbès. The latter gig was a twofer: He also played baritone sax and clarinet in guitarist Smokey Hormel’s Secret Family, reveling in ’50s-era Congolese music and Brazilian forró for a house that was beyond packed. The gulf between the two sets was wide, yet Wieselman was the link. Safe to say he’s had many a night like that.

Organ trios and quartets were ubiquitous by the mid-1960s. In African American neighborhood bars and clubs up and down the East Coast, throughout the Rust … END_OF_DOCUMENT_TOKEN_TO_BE_REPLACED

Terence Blanchard looked around the restaurant table and launched into a gentle sermon about jazz education in Detroit that was part homily, part pep talk, … END_OF_DOCUMENT_TOKEN_TO_BE_REPLACED

Creating a program of solo piano music is the ultimate challenge for any improvising pianist. The music on my latest album, Ways of Disappearing (Sunnyside), … END_OF_DOCUMENT_TOKEN_TO_BE_REPLACED

First the good news: As you can see in our annual Festival Guide, there are plenty of jazz festivals scheduled to happen around the world … END_OF_DOCUMENT_TOKEN_TO_BE_REPLACED