Skip to content
Become a member and get exclusive access to articles, live sessions and more!
Start Your Free Trial
Home > Features > Tangents: Out of the Mouths of Babes… 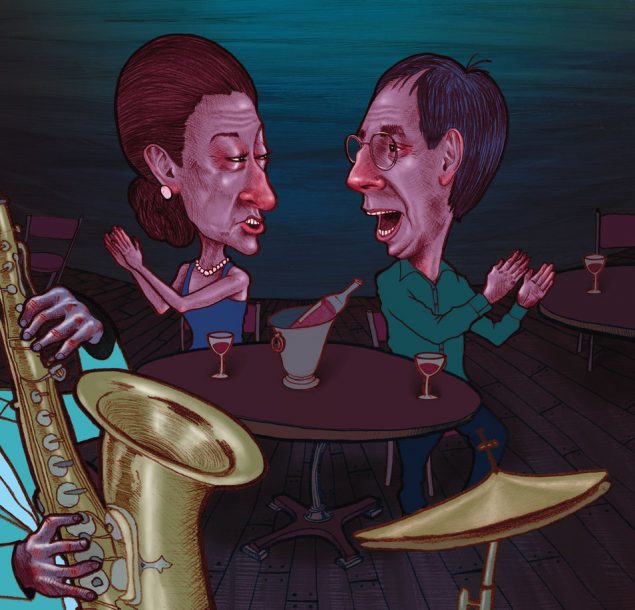 Recently I took a young relative to her first live jazz performance. We were celebrating her 21st birthday and agreed that a dinner at a jazz club would be a very sophisticated and ‘adult’ thing to do. All the elements were in place for a fine evening of music. The club was upscale but convivial. The featured performer was a highly regarded bebop sax player, a player who was neither over the hill nor over the edge. Our waiter did not unctuously inform us of his first name and didn’t pledge his total devotion to us for the evening. Our meal was still reasonably warm when it arrived and the rather aged couple at the next table never once discussed medical procedures. All in all the evening popped along nicely, and when it was over I asked my young charge her opinion of the proceedings.

“Didn’t get what? Some of the music?”

“No,” she said, “I kind of liked the music. It was…I don’t know…different. I just couldn’t figure out why people would start clapping now and then right in the middle of the songs. It didn’t seem to be really happy clapping or anything. It was more like the clapping you hear when you’re at the grand opening of a mall and you’re waiting to hear a band you like but then a city councilman comes onstage to give a little talk. That kind of clapping.”

“Ah,” I replied. “That kind of clapping. What you heard there was the jazz variation of what is commonly known as ‘the golf clap’.”

“You know,” I explained, “that rather muted patting of hands from onlookers at a professional golf tournament when somebody sinks an easy putt. At jazz shows, the audience does the golf clap whenever one of the musicians concludes his or her solo. It’s etiquette. It’s ritual. It shows appreciation for the creativity and virtuosity inherent in the musician’s excellent playing.”

“But it seemed like people clapped after every solo. Were they all excellent?”

“Well, now that you mention it….no,” I said. “Some of the solos were actually sort of humdrum and pro forma.”

“I’m not sure what ‘pro forma’ means, but I get your drift.”

I smiled, feeling that I had adequately addressed her concerns, but she continued.

“So, if some of the solos were just OK, why did people still clap?”

I could feel the conversation going in an unproductive direction but I soldiered on. “Well, the golf clap also signifies that the clapper knows enough about jazz to know when the solo is actually over. It also shows that they’re paying attention to the music and not skylarking around while the musicians are tapping into their various muses.”

“Well, it didn’t look to me like everyone was paying attention. Some people, yeah, but a lot of others were eating and drinking and talking…but they’d still clap! Like those old people at the table next to us? They spent the whole night talking about where they were going to live during the winter. Then, whenever everybody else started clapping, they’d clap too, but they’d clap and talk at the same time. They hardly ever even looked at the band or anything. They just talked and clapped.”

I really wanted to wrap this up.

“Sweetie,” I said, “in jazz appreciation there are many imponderables. The golf clap is one of them. Don’t overthink it. Just remember to do it whenever you go to a jazz performance. If you neglect it, everyone around you will think you’re an uninitiated boob.”

My niece knit her usually un-furrowed brow, looked around the jazz club at the remaining patrons, and said, “Well, I think they’re boobs. I’m just gonna clap when I really like something.”

I still felt that a change of subject was called for, so I asked, “OK, but other than that, how did you like the show?”

“Well, I worried sometimes about the horn player guy,” she replied, “the guy that looked like he was kind of running things because sometimes between songs he’d go up to the microphone and mumble.”

“Yeah,” she said. “Whenever he wasn’t actually playing he’d go over and lean against the piano, put his head down and kind of…slump. A couple of times, I thought he fell asleep.”

“No, no, dear,” I answered, chuckling. “He was just trying to be unobtrusive so that the audience could focus its whole attention on the current soloist. He was also probably immersing himself in the creativity of his bandmates.”

“What-ever. He looked like he was bored or sleeping or something and it bugged me. In fact, I wound up spending more time worrying about him than I did listening to the other players.”

Sighing wistfully, I said, “I envy you, my child. You have much to learn about the joys of jazz.” Originally Published January 1, 2007

Organ trios and quartets were ubiquitous by the mid-1960s. In African American neighborhood bars and clubs up and down the East Coast, throughout the Rust … END_OF_DOCUMENT_TOKEN_TO_BE_REPLACED

Terence Blanchard looked around the restaurant table and launched into a gentle sermon about jazz education in Detroit that was part homily, part pep talk, … END_OF_DOCUMENT_TOKEN_TO_BE_REPLACED

Creating a program of solo piano music is the ultimate challenge for any improvising pianist. The music on my latest album, Ways of Disappearing (Sunnyside), … END_OF_DOCUMENT_TOKEN_TO_BE_REPLACED

First the good news: As you can see in our annual Festival Guide, there are plenty of jazz festivals scheduled to happen around the world … END_OF_DOCUMENT_TOKEN_TO_BE_REPLACED