Skip to content
Become a member and get exclusive access to articles, live sessions and more!
Start Your Free Trial
Home > Features > Once in a Standard: The Savory Collection 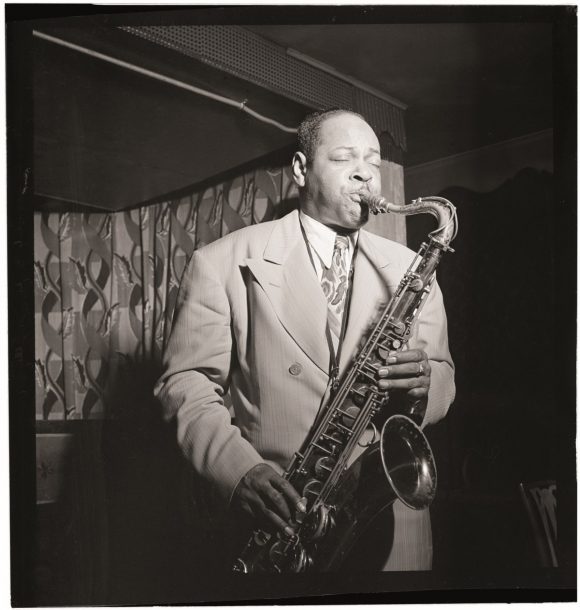 Four years ago, when the first items from William Savory’s collection of jazz audio were restored and shared by the National Jazz Museum in Harlem, one of them was a recording, from a broadcast by the Mutual Broadcasting System radio network, of Coleman Hawkins performing “Body and Soul.”

This was in 1940, at New York’s Fiesta Danceteria (“the world’s first self-service nightclub,” according to the announcer), a year after the release of Hawkins’ hit studio version of the same song. The 1939 “Body and Soul,” now a historic recording, much analyzed and referenced and included in the Library of Congress’ National Recording Registry, had already become a set piece. But the version Savory recorded has much the same dramatic intensity, and lasts two choruses longer. It is genuinely great, but its larger suggestion may be greater: that it is not in the nature of jazz to conjure a goal, achieve it, enshrine it for all time, and then move on to something different. It isn’t quite that the new “Body and Soul” tore down a monument. It just made monuments seem beside the point.

In a short piece of imaginative criticism from the early 1980s called “Once in a Poem,” John Berger, who died on Jan. 2, at 90, writes about the ways in which a poem is different from a story. By extension, he illustrates an idea about how jazz is different from most other kinds of music.

All stories are about battles, in one way or another, Berger says, generalizing grandly; because their tradition is to become resolved, they end in some kind of win or loss. But poetry works in an opposite way. Poems, he writes, “regardless of any outcome, cross the battlefields, tending the wounded, listening to the wild monologues of the triumphant or the fearful. They bring a kind of peace.”

And how do they do that? “By recognition and the promise that what has been experienced can never disappear,” he suggests. “The promise is that language has acknowledged, has given shelter to, the experience which demanded, which cried out.” Poetry doesn’t use language toward some kind of end point, and then its work is done; “it abandons itself to language, in the belief that language embraces all experience, past, present and future.” Which is all to say that poetry represents ongoingness, like a long solo or a long jam session, or the movement of jazz history.

Along the way Berger inserts one other thought. If a story heads toward a resolution, a win or a loss, it often results in a monument. But a poem has no need for one, because its work is never done. “Who, still on a battlefield,” he asked, “wants monuments?” I sense that jazz, by its philosophy and practice, stays on the battlefield. From its beginning to now, same general battlefield. The battlefield exists outside of time or place or sovereign ownership; it’s an approach toward working. Therefore, yes, there is something suspect about monuments in jazz.

Most of the musicians you hear on the first two volumes of The Savory Collection—Coleman Hawkins, Count Basie, Ella Fitzgerald, Lionel Hampton and others—have been given their monuments, mostly protected by copyright, which confirm their inclusion in a canon of recorded works, the best of the best. It would take a lot of counterintuitive will to argue specifically against the primacy of Hawkins’ 1939 “Body and Soul,” or Basie’s Decca recordings, or Hampton’s 1942 “Flying Home.” They are great. They deserve attention. But can one argue against their dominance generally?

Jazz’s recorded masterpieces, its monuments, can create ossified or passive listening. It can happen, when you’ve amassed your Columbia Hot Fives and Sevens, your Columbia Bessies and early Ornette Atlantics, your Clifford and Max on EmArcy, that you stop considering what’s new, or what lies around the edges of the canon. The monuments can also create alienation: Canons look forbidding to those who aren’t sure if they pertain to them.

Savory wasn’t in the room with the musicians represented in these recordings, and he had nothing to do with the making of the music. He wasn’t a producer, an arranger or a functionary of a record company. He was only a relayer of music, and a secondary one: As the performances were going out live through radio wires, reaching a large audience, they were also being captured by the transcription service where he was employed, for a much tinier audience willing to pay for a disc of the performance. He was a comparatively neutral force in the story of jazz, but his work has great implications.

Since we’re on this nonhierarchical line of thought already, let’s not try to judge which of the Savory recordings—available digitally via iTunes and Apple Music—is best. Let’s consider them all on the same plane. There is an exquisite 10-minute slow blues without a title, presided over by Hampton on piano and what sound like improvised vocals, with a mossy tangle of four horn players, including the tenor saxophonist Herschel Evans. There is “Heat Wave,” by the guitarists Carl Kress and Dick McDonough, with unusual tunings that make them sound like folkies from 25 years later. Volume two, all Basie, much of it recorded at the Famous Door, brings much more Herschel Evans, standing close to the microphone, and a jam-session tune called “Rosetta” with a two-chorus Lester Young solo that seems to work simultaneously in opposing extremes: rhythmic complexity and real nonchalance.

Fats Waller, from a gig at the Yacht Club on 52nd Street, might be the best illustration of this whole principle. His tracks on volume one are droll and elegant and briefly volcanic. At the end of “The Spider and the Fly,” Waller roars, “Hi-hi, my-my,” coming down hard on the keyboard in stride rhythm, before the full band enters for one last great wave of counterpoint, ending quietly. Waller keeps talking, trailing off after the last note, making the thing casual and, to a certain way of thinking, unresolved, unfinished: “Oh, child, mercy…”

Great as they are, these recordings don’t need to be monuments, something to be gathered around. When the recording is finished, the event you’re listening to is not. Instead, The Savory Collection is something you come inside—a locus, a place for listeners and musicians to pause and gather, maybe many times, and then go on and find the next thing like it.

Organ trios and quartets were ubiquitous by the mid-1960s. In African American neighborhood bars and clubs up and down the East Coast, throughout the Rust … END_OF_DOCUMENT_TOKEN_TO_BE_REPLACED

Terence Blanchard looked around the restaurant table and launched into a gentle sermon about jazz education in Detroit that was part homily, part pep talk, … END_OF_DOCUMENT_TOKEN_TO_BE_REPLACED

Creating a program of solo piano music is the ultimate challenge for any improvising pianist. The music on my latest album, Ways of Disappearing (Sunnyside), … END_OF_DOCUMENT_TOKEN_TO_BE_REPLACED

First the good news: As you can see in our annual Festival Guide, there are plenty of jazz festivals scheduled to happen around the world … END_OF_DOCUMENT_TOKEN_TO_BE_REPLACED