Skip to content
Become a member and get exclusive access to articles, live sessions and more!
Start Your Free Trial
Home > Features > Of Strings & Sparks: Melvin Sparks, That Is 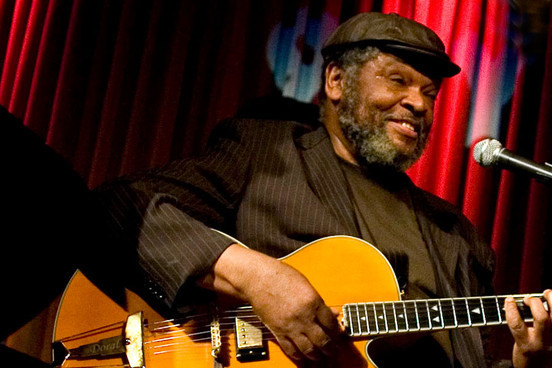 Truth be told, the annual guitar-themed edition you’re holding now is the one I most look forward to assembling. The reason? I’m a guitarist, of course, and as unselfish as jazz pickers are compared to their counterparts in rock, they can still be a tremendously insular bunch. Student musicians, take note: The telltale sign of a great jazz guitar teacher is when he or she suggests you stop listening to so many guitar albums and absorb some Bill Evans and Sonny Rollins. Less purposefully than you might expect, this year’s guitar issue features some of my personal favorites-namely John Pizzarelli, Bill Frisell and Vernon Reid-and I’d like to use this space to cover one more.

Melvin Sparks, who died in March of 2011, a week before his 65th birthday, wasn’t an innovator, or a technical giant, or a composer whose credit you’re likely to recognize. He did, however, embody the guitar’s populist appeal like few others in and around jazz. Raised in Houston, Sparks was trained in jazz and hard blues but came of age as a performer touring with name R&B acts. The earthy versatility of that background made him ideal for the gilded age of soul-jazz he became a principal of, as a house guitarist for the Blue Note and Prestige labels in the ’60s and ’70s. Those sessions, with Lou Donaldson, Charles Earland and others, yielded classic sides of rare cross-generational appeal. Sparks also recorded as a leader for Prestige in the early ’70s and, as with so many other R&B-savvy hollowbody players, found himself in an overproduced pseudo-disco milieu as the decade wore on.

Like his cohort Jimmy McGriff, Sparks was a jazzman who shone brightest in basic situations. He was more harmonically resourceful than a lot of his six-string contemporaries, many of whom were blues players overextending themselves in soul-jazz settings, but less graceful over changes than jazz-guitar icons like Wes Montgomery, George Benson or even Grant Green. Sparks’ heaven-sent gift was groove; to put it one way, his pockets had pockets. And his massive lexicon-full of scrambling thoroughfares, bluesy bends and the sort of staccato fusillades you’d more often associate with his organists-gave lick-heavy solos a good name. In the past couple of decades, some of the most respectable acid-jazz and jam-band figures sought out his sound and gave him props, and he gracefully found his way into those scenes as Coleman Hawkins had done with bebop: as both a forebear and a conduit for discovery. Maybe guitarists aren’t so insular after all.

Organ trios and quartets were ubiquitous by the mid-1960s. In African American neighborhood bars and clubs up and down the East Coast, throughout the Rust … END_OF_DOCUMENT_TOKEN_TO_BE_REPLACED

Terence Blanchard looked around the restaurant table and launched into a gentle sermon about jazz education in Detroit that was part homily, part pep talk, … END_OF_DOCUMENT_TOKEN_TO_BE_REPLACED

Creating a program of solo piano music is the ultimate challenge for any improvising pianist. The music on my latest album, Ways of Disappearing (Sunnyside), … END_OF_DOCUMENT_TOKEN_TO_BE_REPLACED

First the good news: As you can see in our annual Festival Guide, there are plenty of jazz festivals scheduled to happen around the world … END_OF_DOCUMENT_TOKEN_TO_BE_REPLACED