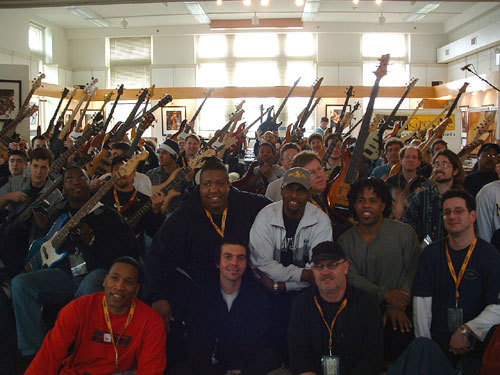 I’m here today to talk about the Bass BootCamp, an instructional program for bass players. My talk is also about what you do when you’re at an intersection. You may be at an intersection yourself-that place where you have to decide whether to continue in the direction you’re headed or to turn in another direction.

I was at an intersection back in 2002 when I came up with the idea of the Bass BootCamp. I sat around my kitchen table with my wife Roxanne and a business partner, Lee Patterson and designed this program that would inform and inspire bass players of all levels. Roxanne designed all the administrative and payment systems, Lee was in charge of operations and logistics and I was responsible for the curriculum and the faculty. None of us knew anything about marketing. Nonetheless, I was confident that there was a world of aspiring professionals who could benefit from the idea.

What I didn’t realize is that we would learn powerful lessons from the students, people who were at their own personal intersections. I’d like to share with you three short stories about students who have come through our program and how their stories have made an impact on me.

First some background about the Bass BootCamp itself. We are now in our 12th year of presenting the event, which is an intense weekend of hands-on workshops and performances. We’ve had students of all levels, with ages ranging from 12 to 68 from all over the US, Canada, Mexico and Europe.

The first story is about Michael. If you were to see Michael you might not think he’s a bass player, because he looks like a personal trainer. You’d be right because he was a personal trainer in his day job, but in his heart he’s a bass player. Michael represents the student who is at the core of why we started the camp-an advanced player who aspires to be a professional. He was at an intersection, dissatisfied with his job as manager of a fitness center. As an aspiring professional, he was drawn to the BBC by our faculty. Through the years, the faculty has included a who’s who in the bass world: Victor Bailey, Michael Manring, Jimmy Haslip, Richard Bona, Victor Wooten, Will Lee and many more.

So Michael came to camp, picked the brains of the pros, worked his tail off and went home and worked his tail off some more. Then one day Michael sent me an email with good news. He only had two real objectives: to make a full-time living as a bass player and to travel. I’m happy to report that Michael is the bass player for the Ringling Bros, Barnum and Bailey circus.

Now lest you think that all our students run off and join the circus, Michael’s story is unique. Most of our students have in fact not been interested in becoming full-time bass players. Most people are attracted to the camp because they are looking for something else. Most of them are baby boomers who have enjoyed successful careers, built businesses, raised families and now want to reclaim the creative parts of themselves.

This was the case with Glenn, a baby boomer who came to our camp along with his son for some bass playing and family bonding time. Glenn realized he was at an intersection; he didn’t want to become a full-time bass player, but he needed a change. After attending our camp he was so inspired that he went to his wife and announced that he wanted to sell his interest in the successful family-owned gourmet food business and start a new venture that would be more fulfilling. Today, Glenn is the owner of the premier boutique bass shop on the East Coast.

Finally, there’s Linda. Hers is the story of someone who didn’t realize she was at an intersection. Linda woke up excited about an idea and immediately called her daughter and asked to meet her on 48th street in Manhattan. The daughter asked why.

“Because I need to go to a music store.”

“Why do you need to go to a music store?”

“But Mom, you don’t know how to play the bass!”

“I know, but I had a dream I was playing the bass.”

So she bought a bass, took lessons and stumbled onto an ad for the Bass BootCamp. She called the number on the ad and asked the two questions everyone asks: “Is it for students at my level?” and ” Are there any openings?” The answers to these questions are always “yes” and “yes.” The program is for every level: advanced, intermediate and beginner. In fact, I like to say, if you pick up a bass on the way from the airport, we can teach you something. As to whether there is space, there’s always room for one more bass player.

Linda came to the camp and struggled at first but over the weekend, grew in confidence. She went home, continued her private lessons and continued to grow. She came back to camp the following year and her skill level and confidence grew even more. At the last workshop on the last day, I asked students what they wanted to do with their bass playing. By now, we had learned that not everyone was interested in being a professional bass player. Some folks want to just play better at their church, some want to build a studio, there are a few that actually want to go on tour, but many just want to jam with their friends in the garage without feeling embarrassed.

When I asked Linda about her plans, she responded that she wanted to combine bass playing with her work. I asked her what she did for a living. She’s a grief counselor for people who’ve been affected by 911.

It was in that moment that I understood the power of the camp; that it could help people find meaning in their lives and pay it forward. I learned that the camp wasn’t just about professional development, but much more. I’ve learned to approach each intersection with eagerness and openness excited about new paths and possibilities. I encourage you to do the same.

In spring 1963, when Coleman Hawkins was 58 and making some of the most astonishing music of his career, he gave a short but revealing … END_OF_DOCUMENT_TOKEN_TO_BE_REPLACED

Forgive me if I’ve mentioned this before (perhaps repeatedly), but I’ve been playing guitar now for more than 40 years. So when the time comes … END_OF_DOCUMENT_TOKEN_TO_BE_REPLACED

Organ trios and quartets were ubiquitous by the mid-1960s. In African American neighborhood bars and clubs up and down the East Coast, throughout the Rust … END_OF_DOCUMENT_TOKEN_TO_BE_REPLACED

Terence Blanchard looked around the restaurant table and launched into a gentle sermon about jazz education in Detroit that was part homily, part pep talk, … END_OF_DOCUMENT_TOKEN_TO_BE_REPLACED