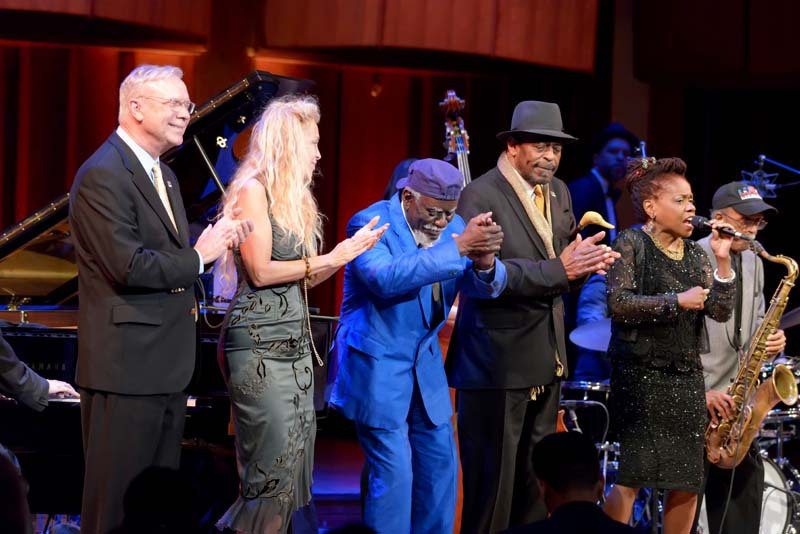 This column was supposed to be different. This column was supposed to be a fervent, even giddy recounting of an inspired dialogue between two absolute giants of the avant-garde, Pharoah Sanders and Archie Shepp, perfectly timed to kick off this saxophone-themed issue. “At one of the jazz year’s essential events, the NEA Jazz Masters Tribute Concert,” it might have read, “Sanders and Shepp turned the stately Kennedy Center Concert Hall into a sonic cathedral.” I probably would’ve revised that last trite bit, but you get the idea: Sanders and Shepp were in the building, but their axes must have stayed back at the hotel. In 2014, the Jazz Masters induction ceremony reached a kind of tipping point, stretching toward three and a half hours, as the New York Times detailed, too much of that time devoted to boundless speechifying. The 2015 program, which I attended and reported on for JT, was delightfully paced and deftly organized. Most transformative, it saw a shift from artist-to-artist tributes to performances by the honorees themselves. Think about experiencing Carla Bley, George Coleman and Charles Lloyd within the same two-hour concert. Not bad.

The April 4, 2016 celebration, just an hour and 40 minutes long, could have used more bells and whistles. But before criticism becomes cynicism, let’s give credit where it’s due. The skillfully directed enterprise did include a grip of peerless talent and, perhaps most important, was open to the public and admission-free. Its true purpose-to honor the new class of Jazz Masters, not to give jazz insiders the concert of their dreams-was dutifully served, and like the rest of the crowd, Sanders, Shepp, vibraphonist Gary Burton and musicians’ advocate Wendy Oxenhorn received an indelible night. I’m thinking of a medley homage to Shepp, boasting Jason Moran and the locomotive frontline of David Murray, Rudresh Mahanthappa, Roswell Rudd and Ambrose Akinmusire. And a pair of sterling duo performances, including nods to Burton (Chick Corea and Stefon Harris meditating on the former’s “Crystal Silence”) and Sanders (Randy Weston and Billy Harper interpreting Weston’s “The Healers”). And Jimmy Heath, Lakecia Benjamin and Justin Kauflin quickly developing working-band rapport. Not bad.

Organ trios and quartets were ubiquitous by the mid-1960s. In African American neighborhood bars and clubs up and down the East Coast, throughout the Rust … END_OF_DOCUMENT_TOKEN_TO_BE_REPLACED

Terence Blanchard looked around the restaurant table and launched into a gentle sermon about jazz education in Detroit that was part homily, part pep talk, … END_OF_DOCUMENT_TOKEN_TO_BE_REPLACED

Creating a program of solo piano music is the ultimate challenge for any improvising pianist. The music on my latest album, Ways of Disappearing (Sunnyside), … END_OF_DOCUMENT_TOKEN_TO_BE_REPLACED

First the good news: As you can see in our annual Festival Guide, there are plenty of jazz festivals scheduled to happen around the world … END_OF_DOCUMENT_TOKEN_TO_BE_REPLACED