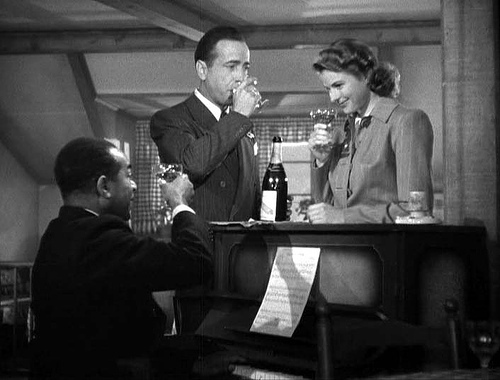 It’s countdown-to-Oscar week and, as become the norm in recent years, the 2010 Best Song nominees are stupefyingly underwhelming. So lean are the musical pickings that there are only four nominees. If I had a vote, it would have to go to “We Belong Together,” simply because I recognize (and admire) its author, Randy Newman, and Toy Story 3 is the only one of the four films in this category I’ve seen.

Rather than ponder which tune from a so-so slate will take home the gold (or if, as is the likeliest scenario, Newman cops his second trophy), I thought it would be more fun to tally up 10 tuneful facts from the entire span of Hollywood history.

1. Best song to lose at the Academy Awards

Though the first Oscars were given out in 1929, the Best Song category wasn’t added until 1937. Nominees that year included Harry Warren, Al Dubin, Sammy Fain, Lew Brown and Leo Robin. But the obvious frontrunner was George and Ira Gershwin’s stellar “They Can’t Take That Away from Me” from the Fred Astaire/Ginger Rogers musical Shall We Dance. Shockingly, the prize instead went to Harry Owens for “Sweet Leilani” from Waikiki Wedding.

There’s plenty of competition, but the hands-down winner must be Johnny Mandel and Paul Francis Webster’s hauntingly beautiful “The Shadow of Your Smile” from the 1966 Elizabeth Taylor/Richard Burton travesty The Sandpiper. Fortunately, the Academy were clever enough to recognize the song as the film’s only real asset and honored it with the Oscar. It bested, among others, Michel Legrand’s equally lovely “I Will Wait for You” and Burt Bacharach and Hal David’s “What’s New Pussycat?”

3. Best song cut from the movie it was written for

Michel Legrand was commissioned to write the score for the 1971 coming-of-age drama Summer of ’42. He asked his pals, and frequent collaborators, Alan and Marilyn Bergman to write the lyrics for the main theme. They delivered “The Summer Knows,” one of the most gorgeous tunes in the Bergman canon. The song was intended to play over the closing credits. But director Robert Mulligan opted to end the film with a different Legrand piece. The Bergmans’ lyric was never heard on screen, and only a snippet of Legrand’s accompanying music was heard. Fortunately, “The Summer Knows” went on to become one of the most durable of modern standards.

David Raksin composed the main theme for the classic 1944 film noir Laura, directed by Otto Preminger. But it wasn’t until 1945, well after the film’s release and its massively successful run, that Johnny Mercer was asked to create an accompanying lyric. The result, simply entitled “Laura,” became, during Raksin’s lifetime, the second most frequently recorded song after Hoagy Carmichael’s “Stardust.”

5. Best Cole Porter movie song to clock in at under one minute

In the 1949 battle-of-the-sexes comedy Adam’s Rib, arguably the best of the many Katharine Hepburn/Spencer Tracy screen unions, Hepburn and Tracy portray married lawyers Adam and Amanda Bonner, representing opposite sides in a headline-grabbing, attempted murder case. The Bonner’s next-door neighbor is bon vivant songwriter Kip Lurie (David Wayne), who is infatuated with Amanda. At one point, Kip serenades Amanda with a tune he’s written especially for her. But only a sliver of the kitschy “Farewell, Amanda,” words and music by Porter, is actually performed. Later in the film, another snippet from the song is heard on the radio, and the singer is obviously, if uncredited, Frank Sinatra.

6. Most obscure Sinatra appearance on a film’s soundtrack

In 1964, director Richard Quine reteamed Sabrina costars William Holden and Audrey Hepburn for the soggy comedy Paris When It Sizzles, or as it has become more commonly known since its egg-laying debut, Paris When It Fizzles. The silly Parisian storyline involves a playboy screenwriter (Holden) and the secretary (Hepburn) who comes to his rescue as he tries to concoct a storyline for a film with the working title The Girl Who Stole the Eiffel Tower. A single line (actually, just the title) from the would-be film-within-a-film’s musical theme is heard in one scene. The one-line lyric was credited to Quine, Nelson Riddle composed the music, and the cameo voice was Frank Sinatra’s. (The soundtrack for Paris When It Sizzles also features Fred Astaire’s recording of “That Face,” an obviously playful reference to the earlier, Paris-set romantic comedy Funny Face that had paired Hepburn with Astaire).

7. Most iconic movie song that didn’t qualify for Oscar consideration

Ever since the 1942 release of Casablanca, Dooley Wilson’s tender version of “As Time Goes By” has stood out as one of the film’s most memorable moments. Indeed, in 2004, the American Film Institute cited Wilson’s rendition as the second greatest onscreen song performance of all time (nosed out of the top spot by Judy Garland’s “Over the Rainbow” in The Wizard of Oz). But “As Time Goes By” couldn’t be included among 1942’s ten Best Song nominees because it wasn’t written for the film. The tune, words and music by Herman Hupfeld, was actually penned eleven years earlier for the Broadway musical Everybody’s Welcome. So, though Casablanca was named the year’s Best Film, and director Michael Curtiz and screenwriters Howard Koch and Julian and Philip Epstein were also winners, the Best Song prize was awarded to Harry Warren and Mack Gordon’s “You’ll Never Know” from Hello, Frisco, Hello.

Johnny Mandel wrote the main theme for 1970’s M*A*S*H. The same theme was again used when M*A*S*H was adapted for TV in 1972. For one of the movie’s pivotal scenes, the staged suicide of dentist Walter Koskiusko (John Schuck), Mandel required a lyric for the song. That lyric, which earned the song the oft-cited subtitle “Suicide Is Painless,” was written by Mike Altman, the 14-year-old son of the film’s director, Robert Altman.

Though it garnered a Best Actress nod for Jean Simmons, who contributed a stellar performance as the dissatisfied wife in a stagnating marriage, 1969’s The Happy Ending failed to ignite the box office and has flown largely under the radar ever since. (It surfaced briefly on VHS several years ago, but has never been issued on DVD). In addition to Simmons’ performance and the equally strong presence of Bobby Darin in a small supporting role, one of the film’s highlights is the twice-featured song “What Are You Doing the Rest of Your Life?,” music by Michel Legrand with lyrics by Alan and Marilyn Bergman. The song did receive an Oscar nomination, but lost to Burt Bacharach and Hal David’s über-popular “Raindrops Keep Falling On My Head” from Butch Cassidy and the Sundance Kid.

10. The “no contest” Oscar contest

The year 1939 is widely acknowledged as one of the greatest in movie history. But the year that produced Gone With the Wind, Ninotchka, Dark Victory, Stagecoach, Mr. Smith Goes to Washington, Gunga Din, Wuthering Heights and The Hunchback of Notre Dame wasn’t a great one for songs. Only four tunes made the final Oscar ballot, with “Over the Rainbow” facing off against a trio of lackluster competitors: “Faithful Forever” from Gulliver’s Travels, Irving Berlin’s “I Poured My Heart Into a Song” from Second Fiddle and, best of the three, Buddy De Sylva’s “Wishing” from Love Affair. That “Over the Rainbow” would win was a foregone conclusion (even though MGM executives had originally wanted to cut the song, arguing that it slowed down the film.) The Oscar race might, however, have been tighter if Burton Lane and Frank Loesser’s wonderful “The Lady’s In Love with You” from Some Like It Hot (the ’39 Bob Hope musical, not to be confused with the 1959 Billy Wilder cross-dressing comedy of the same name) had gotten the nomination it deserved.

If you’d like to share your comments about movie songs, or have suggestions for future installments of Hearing Voices, please direct your email to [email protected]

Organ trios and quartets were ubiquitous by the mid-1960s. In African American neighborhood bars and clubs up and down the East Coast, throughout the Rust … END_OF_DOCUMENT_TOKEN_TO_BE_REPLACED

Terence Blanchard looked around the restaurant table and launched into a gentle sermon about jazz education in Detroit that was part homily, part pep talk, … END_OF_DOCUMENT_TOKEN_TO_BE_REPLACED

Creating a program of solo piano music is the ultimate challenge for any improvising pianist. The music on my latest album, Ways of Disappearing (Sunnyside), … END_OF_DOCUMENT_TOKEN_TO_BE_REPLACED

First the good news: As you can see in our annual Festival Guide, there are plenty of jazz festivals scheduled to happen around the world … END_OF_DOCUMENT_TOKEN_TO_BE_REPLACED