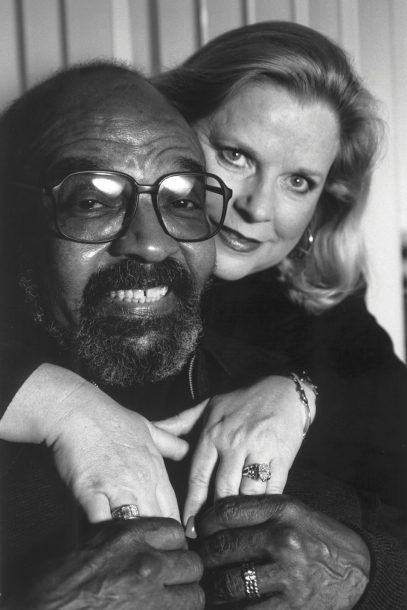 When I used to do jazz television interviews from the Blue Note in Manhattan, a guest one early afternoon was James Moody. (He was very disinclined to use his first name.) While the crew was setting up, Moody was in the next room communicating lovingly with his tenor saxophone. The flow of pulsating sound was so beautiful-yes, that’s the word-that I said to myself, “This is jazz!”

Through the years, in or out of jazz, the most generously open spirits I’ve known were Dizzy Gillespie and his longtime sideman (and eventual co-leader) Moody. Not that Moody was free of anger; he felt great animosity toward Jim Crow, which he considered still among us. But interpersonally, Moody, like his music, radiated the challenges and joys of continuous self-discovery.

Following his death in December at 85, NPR’s All Things Considered pulled from a 1997 interview in which Moody recalled standing outside the window of his neighborhood music store in Newark, N.J., as a child. “I used to look at the saxophones every day,” he said. “I’d just look at them, you know. And when I first got my first saxophone, I put it in bed by me and went to sleep with it, man-just looking at it, boy.”

Somehow I never got to ask Moody who his influences on the horn were. Dizzy Gillespie, as Moody did tell me, was his primary influence in life. “I often will be doing something,” he said, “when I will stop and say to myself, ‘Ah, that’s what he meant.’ That’s how deep the man touched me.”

But at the beginning of Moody’s jazz life, as he told Bob Bernotas in an interview for the Saxophone Journal, “Jimmy Dorsey was my favorite, and then I heard Charlie Barnet and he was playing ‘Cherokee,’ and I liked him better.” Moody’s next sax hero was tenor player Georgie Auld, whom he heard at a concert by Artie Shaw’s band. “[B]oy, that knocked me out! Oh, man, I dug it!” Similarly, Lester Young once told me that his first mentor was Frankie Trumbauer, whom Pres heard when Trumbauer was with Bix Beiderbecke.

For Moody, it was Pres himself who “took all that out. I said, ‘No, this is the way I want to play.'” But after Pres’ sound gave him “goosebumps,” Moody heard Coleman Hawkins. “He was playing the hell out of the changes,” Moody told Bernotas. “[N]aturally, the thing to do would be to combine Pres and Hawk.” But beyond these introductions into the jazz life, what really counts is how the young musician evolved into the onliest Moody.

Dizzy became a profound influence in Moody’s life and music by introducing him to the Bahá’í Faith. I often wondered at and admired the inward serenity that was at the core of Dizzy’s triumphs and discoveries. When he told me about Bahá’í, I was tempted to join him and, later, Moody and Moody’s wife, Linda, in that religion. What it taught Dizzy was that all of humanity is a single race, erasing entrenched barriers of nationalism, race, class and other divisions. “There’ll be world government,” Dizzy told me. “Everybody belongs to it, and you don’t need a passport. There’ll be an international language taught in all schools. This should take another one or two thousand years, but on the way, we get little pinches of unification.”

Knowing how jazz has transcended so many intractably divided cultures, I couldn’t resist asking Dizzy if jazz intersected with that faith. “Yeah,” he nodded. “That really is a pinch of unification. It really makes me feel good to belong to jazz, to that part of society.”

And Moody, like many jazz musicians I know, felt that pinch of unification when he told his life’s stories around the world. As for the still-pulsating Bahá’í Faith, it is both tragic and unsurprising that Iran’s dictatorship, a brutal suppressor of human rights, has relentlessly imprisoned and isolated Bahá’í followers-even going so far as to vandalize their cemeteries. But Iran has no power to silence the worldwide sounds of liberation in the music of Moody and Dizzy, which contains Bahá’í’s blessings of human unanimity.

The naturalness of Moody’s ordered jazz passion seemed so effortless, and reminded me of how misled many jazz listeners were decades ago. They were convinced that once a player had the gift of jazz, lessons in technique or music theory were unnecessary. He or she just blew their horn! Moody knew better.

Here he is telling Bob Bernotas how he learned to double on flute. Characteristically self-deprecating, he described himself as “a flute holder,” not a flute player. “Play as many different scales as you can,” Moody advised. “Play them over and over, because repetition is the thing that really gives you familiarity with an instrument.

“When I say scales,” he continued, “I’m not just saying C-D-E-F-G-A-B-C. Play them forward, backward, from each degree of the scale going up, each degree coming back. … And I mean minor scales, modes … every scale that you can think of-and then synthetic scales that you make up yourself. Practice them!” But then you still have to have something to say, as Moody certainly did.

Toward the end of Moody’s life, Linda asked me and other friends to write something for what became a public memorial service in San Diego on Dec. 18. (Seeing Moody and Linda together was a vision of a limitless chorus of love.) She read some of the messages to Moody. I started mine the way I started this Final Chorus. Linda later said on their website (www.jamesmoody.com) that “friends and Moody fans have sent thousands of well wishes on Facebook, e-mail and cards to my precious husband. He was astonished at the outpouring of love.”

I called Linda when I heard of her husband’s passing. “Moody,” I said, “will always live!”

Organ trios and quartets were ubiquitous by the mid-1960s. In African American neighborhood bars and clubs up and down the East Coast, throughout the Rust … END_OF_DOCUMENT_TOKEN_TO_BE_REPLACED

Terence Blanchard looked around the restaurant table and launched into a gentle sermon about jazz education in Detroit that was part homily, part pep talk, … END_OF_DOCUMENT_TOKEN_TO_BE_REPLACED

Creating a program of solo piano music is the ultimate challenge for any improvising pianist. The music on my latest album, Ways of Disappearing (Sunnyside), … END_OF_DOCUMENT_TOKEN_TO_BE_REPLACED

First the good news: As you can see in our annual Festival Guide, there are plenty of jazz festivals scheduled to happen around the world … END_OF_DOCUMENT_TOKEN_TO_BE_REPLACED