Skip to content
Become a member and get exclusive access to articles, live sessions and more!
Start Your Free Trial
Home > Features > Monnette Sudler: A Musician in Need 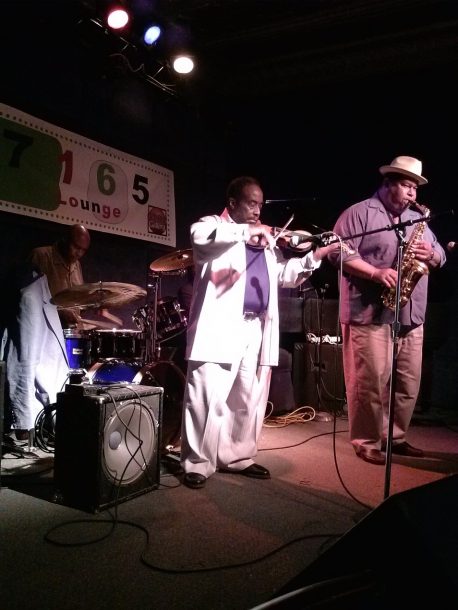 Physically a shadow of herself, she sat tucked in the corner of the club with oxygen running and a face mask on because her immune system is depressed from her battle with Idiopathic Pulmonary Fibrosis (IPF) lung disease. She’s waiting for a lung transplant.

Nobody knows what causes the scarring and stiffening of the lung tissue, hence the idiopathic part of the name, but as the lung thickens, breathing becomes labored and more difficult-oxygen has a hard time finding its way into the bloodstream. All researchers know is that it’s deadly and grows progressively worse as time goes on. Life expectancy is between three and five years, according to the National Institutes of Health, and guitarist Monnette Sudler was diagnosed with IPF six years ago.

WRTI Jeff Duperon hosted the event with his usual aplomb, calling up some of Monnette’s dearest friends to the stage. Odean Pope played an exquisite rendition of “I Want to Talk about You,” all by himself, his sax and his eyes pointed toward the woman of honor. Then poet Sonia Sanchez came up to read several poems, the most deeply felt to my ears was “Peace” and “Morning Song and Evening Walk,” a work written for Martin Luther King, Jr.

The moments were so heavy with meaning; they seemed to draw in the artwork on the walls ?- were the busy barbershop men leaning in with the audience to catch a whisper of news from the stage? Could that contented mother and child in snuggled bliss be nodding in recognition at the special tributes being given?

One by one and two by twos they came up: Sherry Butler belting “Stormy Monday” backed up by alto player Julian Pressley, pianist Barry Sames, bassist Charles Beasley and drummer Dave Gibson. Then violinist John Blake Jr. stepped up, all in white, to tell us all about how love breaks through “Softly in a Morning Sunrise.” Guitarist and singer Sharon Katz and her South African “Peace Train” band lifted the room as Grover Washington Jr’s widow Christine looked for the wedding ring that had flown from her finger in the excitement. It was found before singers Barbara Walker and Veronica Underwood closed the late afternoon musical embrace by gospel singing the roof off into Mt. Airy’s magical sunset sky.

Jazz Bridge, the 510C3 nonprofit that aids professional jazz and blues musicians in the Greater Philadelphia Metro area, has set up a special way that you can help Monnette Sudler in her journey to get a lung transplant. It’s the only thing that will save her life now.

Tax-deductible donations can be given by credit card through the web site or you can send a check to Jazz Bridge, 3008 Limekiln Pike, Glenside, PA, 19038. Designate in the memo that your check is for the Monnette Sudler Fund.

Organ trios and quartets were ubiquitous by the mid-1960s. In African American neighborhood bars and clubs up and down the East Coast, throughout the Rust … END_OF_DOCUMENT_TOKEN_TO_BE_REPLACED

Terence Blanchard looked around the restaurant table and launched into a gentle sermon about jazz education in Detroit that was part homily, part pep talk, … END_OF_DOCUMENT_TOKEN_TO_BE_REPLACED

Creating a program of solo piano music is the ultimate challenge for any improvising pianist. The music on my latest album, Ways of Disappearing (Sunnyside), … END_OF_DOCUMENT_TOKEN_TO_BE_REPLACED

First the good news: As you can see in our annual Festival Guide, there are plenty of jazz festivals scheduled to happen around the world … END_OF_DOCUMENT_TOKEN_TO_BE_REPLACED