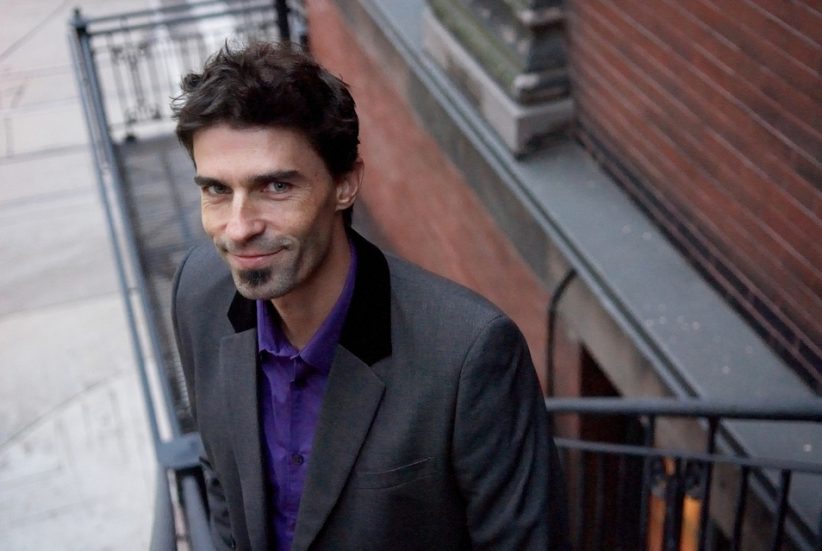 Jazz and Broadway musicals are often cited as the two most distinctly American musical forms. Their relationship, though, has always been a bit one-sided. Where jazz has only occasionally invaded the Broadway stage, show tunes have long been jazz fodder, dating all the way back to the 1927 Kern/Hammerstein masterpiece Show Boat which, with its landmark integration of book and score, can be considered the grandfather of all subsequent stage musicals. Indeed, it’s safe to assume that the repertoire of every jazz artist, instrumentalist or vocalist, who has traversed the Great American Songbook includes several selections that debuted on the Great White Way.

Among vocalists, all of the usual suspects – Ella, Sarah, Carmen, Sinatra, Bennett, Mel Tormé, Anita O’Day, Mark Murphy, etc. – have dug deep into the Broadway catalog. But some of the most interesting Broadway-oriented vocal albums have come from unexpected sources. One of the best, 2008’s Stage Door Johnny, was recorded by sexagenarian bassist John Miller, whose resumé also includes musical direction of more than six-dozen Broadway and off-Broadway shows. The gruff-voiced, cunningly sardonic Miller delivers remarkably fresh takes on such chestnuts as “Wouldn’t It Be Loverly,” “Ol’ Man River,” “Real Live Girl,” “Oh, What a Beautiful Mornin'” and a half-dozen others. His funky, postmodern reimaging of Peter Pan‘s “I Won’t Grow Up” is alone worth the price of admission, as is his loping rendition of Guys and Dolls‘ “Fugue for Tinhorns.”

Now, Winnipeg-born, Toronto-based pianist and composer Mike Janzen has, with his trio mates (bassist George Koller and drummer Ben Riley), crafted a Broadway salute, Try to Remember, that is equally distinctive and sublime. Like Miller, the decades younger, classically trained Janzen, is only an occasional vocalist whose jazz work represents just one aspect of a multi-faceted music career. In the decade-and-a-half since he graduated from the University of Toronto with a masters in Composition, he has composed and arranged for the Winnipeg Symphony Orchestra, contributed to film soundtracks and become deeply involved in spiritual music, performing and recording both classic and original hymns. His 2009 collection of inspirational tracks, Little Trinity Worship Sessions, recorded at Toronto’s historic Little Trinity Anglican Church, represented his first full-length project as vocalist.

But Janzen has also been a lifelong jazz devotee, and has studied with several of the most distinguished Canadian players and instructors. His first recorded foray into jazz, with Koller and Riley, was 2005’s aptly-titled Beginnings, an impressive assortment of mostly original tunes, though it did include one Broadway selection, a feisty treatment of Fiddler on the Roof‘s “If I Were A Rich Man,” and also introduced audiences to Janzen as a jazz singer with his delicate reading of Sting’s “Fragile.” A second trio album, Mombacho, followed in 2008 with even greater focus on original compositions.

Try to Remember was originally conceived when Janzen and his wife were trying to conceive, and was finally realized when the couple welcomed their firstborn, daughter Haddie, into the world. Janzen’s specific goal was to concentrate on Broadway tunes (three of which are actually from film and TV musicals) that, directly or indirectly, celebrated children. He opens with the only song that overlaps Miller’s album, a loose, joyous “Oh, What a Beautiful Morning,” then reshapes Mary Poppins‘s sprightly “Chim Chim Che-ree” as a twilit exploration of shadowy delights. Like Miller, there’s a smoky huskiness to Janzen’s voice that arrestingly tempers such inherently sunny material. Oliver!‘s “Consider Yourself” is superbly handled with angular jauntiness, as is “If I Only Had a Brain.”

There are two selections from the child-focused musical Annie. “Maybe” is one of the album’s three instrumental tracks and, as such, is stripped of its syrupiness and handled with enchanting elegance. “NYC,” originally sung by a father figure (Daddy Warbucks) to his wide-eyed ward (Annie) as a celebration of her exciting new habitat, is a clever fit with Janzen’s theme of welcoming home a newborn. More directly apropos is Les Miserables‘ “Bring Him Home,” which Janzen strips of its overblown theatricality and transforms into a gentle lullaby.

The title track from The Fantasticks seems a somewhat odd fit, with its backwards-glancing wistfulness, though Janzen’s take is masterfully rendered. The remainder of the album includes three of finest love songs ever to emerge from musical scores. Janzen takes a breezy stroll through Guys and Dolls‘ rapturous ode to freshly minted passion, “I’ve Never Been In Love Before,” and provides West Side Story‘s towering “Somewhere,” the album’s second instrumental track, precisely the august tenderness it demands. Most stunning though, is the third of the instrumental tracks, a richly imaginative rendition of Rodgers and Hammerstein’s “Do I Love You (Because You’re Beautiful” (from TV’s Cinderella) that, in contrast to the dewiness of most previous versions, is wonderfully jubilant.

Organ trios and quartets were ubiquitous by the mid-1960s. In African American neighborhood bars and clubs up and down the East Coast, throughout the Rust … END_OF_DOCUMENT_TOKEN_TO_BE_REPLACED

Terence Blanchard looked around the restaurant table and launched into a gentle sermon about jazz education in Detroit that was part homily, part pep talk, … END_OF_DOCUMENT_TOKEN_TO_BE_REPLACED

Creating a program of solo piano music is the ultimate challenge for any improvising pianist. The music on my latest album, Ways of Disappearing (Sunnyside), … END_OF_DOCUMENT_TOKEN_TO_BE_REPLACED

First the good news: As you can see in our annual Festival Guide, there are plenty of jazz festivals scheduled to happen around the world … END_OF_DOCUMENT_TOKEN_TO_BE_REPLACED