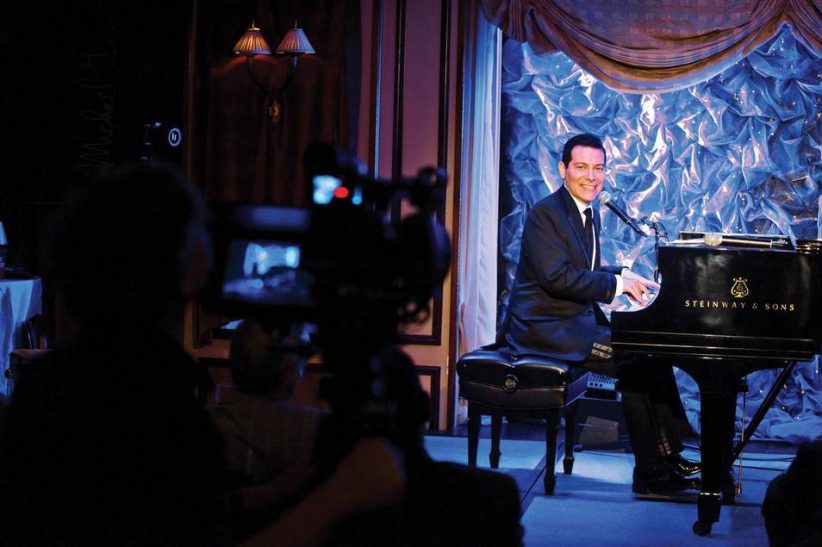 This week, on October 6, PBS launches Michael Feinstein’s American Songbook, a three-part series that trails the singer/pianist around the country, documenting not just his performances in venues large and small and settings grand and intimate but also his tireless dedication to preserving, protecting and promoting the songs and songwriters that have shaped the Great American Songbook.

Concurrent, though not associated, with the series’ debut arrives Fly Me to the Moon, a fitting collection of 14 tunes, familiar and obscure, recorded by Feinstein in tandem with guitar great Joe Negri.

Though Feinstein has been affiliated with the California-based Concord Music Group for several years and maintains his own label, Feinery, under the Concord umbrella, this latest album comes from little-known DuckHole Records out of Scottsdale, Arizona. Though its profile remains low, DuckHole has been around since 2006 and is both an intriguing and admirable endeavor.

As proclaimed on the label’s website, its mission is to, “find, record and promote music and musicians that don’t quite fit the marketing niche of most major labels. In fact, the name itself was born from the idea that many talented musicians are difficult to pigeonhole into any particular genre of music, but their music is definitely worthy of reaching a wide audience (there was trademark issues with pigeonhole, so another bird was substituted in and DuckHole Records was born). For many of today’s recording artists, the difference in what is recorded on their album and what is heard in their live show is so dramatic that often it is difficult to tell what part is musician and what part is studio magic. With this in mind, the only essential trait that we started looking for in a musician is talent – someone who has the chops to do live what is recorded on the album.” In other words, DuckHole is tailor-made for Feinstein’s brand of showmanship and craftsmanship.

Though Feinstein has produced more than his share of intimate recordings, the Fly Me to the Moon sessions represent a new threshold of coziness. Indeed, these piano-less tracks recall such classic voice-and-guitar albums as Sammy Davis Jr. Sings and Laurindo Almeida Plays and Johnny Mathis’ One Fire, Two Guitars with Al Caiola and Tony Mottola. Feinstein opens with the Cole Porter gem “So In Love” which, interestingly, was also featured on his previous album, The Power of Two with fellow vocalist Cheyenne Jackson. The two interpretations could not, however, be more different. The Power of Two treatment is boldly beautiful, built of grand, swirling passion; the newer version captures the same intensity but, cooked over much lower heat, is shaped of ardor so powerful it need not speak above a whisper to be fully felt.

The balance of the album is consistently soft and subdued, with Negri (occasionally assisted by bassist Jay Leonhart and drummer Joe Cocuzzo) carving gorgeously gentle paths for Feinstein to follow. As always, Feinstein treats each song with supreme respect, including often-overlooked intros and extra verses, and maintaining strict adherence to the lyrics as originally written. About half the selections are instantly recognizable, including the Bart Howard title track, Antonio Carlos Jobim’s enchanting “Meditation,” Porter’s “Why Shouldn’t I,” Johnny Mercer and Harold Arlen’s “This Time the Dream’s on Me,” Leonard Bernstein, Betty Comden and Adolph Green’s haunting “Lonely Town” (from On the Town) and the Johnny Burke/Jimmy Van Heusen masterpiece “It Could Happen to You.” All are expectedly lovely. But it is the lesser-known songs, the sort of vibrant obscurities it takes an archivist of Feinstein’s skill to unearth, that most enrich this tranquil trove.

There is Sammy Cahn and Jule Styne’s sweet, tender “Blame My Absent Minded Heart,” written for Doris Day to sing in the fluffy 1949 Warner musical It’s A Great Feeling. From the unheralded team of Oscar Hammerstein and Ben Oakland (who together created the marvelous “I’ll Take Romance”) comes the enchanting “A Mist Is Over the Moon.” The spirited “Serenata,” from Mitchell Parish and Leroy Anderson, will be familiar to fans of Nat “King” Cole’s superlative 1961 pairing with George Shearing, but has seldom appeared elsewhere. Gus Kahn and fellow MGM contract tunesmith Bronislau Kaper wrote the warmly sensitive “While My Lady Sleeps” for Nelson Eddy to perform in the screen adaptation of The Chocolate Soldier. Harry Warren’s “One Love In My Life” began as background music in the landmark Hollywood musical 42nd Street, the earnest lyric later added by Murray Grand at Warren’s request. Finally, from Johnny Burke and James Monaco, there is “A Man and His Dream” which, fittingly, speaks of a man’s deepest desires propelled by mellow guitars.

As priceless as the tracks themselves, Feinstein’s superbly illustrative liner notes trace the provenance of each song. Feinstein also acknowledges Negri’s enormous contribution, praising the guitarist’s “fluid and spontaneous ability to perfectly accompany and enhance every song I was singing.” Negri respond with the apposite observation that, “Michael Feinstein is the master of the American Songbook. In fact, Michael is the American Songbook.”

If you’d like to share your comments about Michael Feinstein or Joe Negri, or have suggestions for future installments of Hearing Voices, please direct your email to [email protected]

Organ trios and quartets were ubiquitous by the mid-1960s. In African American neighborhood bars and clubs up and down the East Coast, throughout the Rust … END_OF_DOCUMENT_TOKEN_TO_BE_REPLACED

Terence Blanchard looked around the restaurant table and launched into a gentle sermon about jazz education in Detroit that was part homily, part pep talk, … END_OF_DOCUMENT_TOKEN_TO_BE_REPLACED

Creating a program of solo piano music is the ultimate challenge for any improvising pianist. The music on my latest album, Ways of Disappearing (Sunnyside), … END_OF_DOCUMENT_TOKEN_TO_BE_REPLACED

First the good news: As you can see in our annual Festival Guide, there are plenty of jazz festivals scheduled to happen around the world … END_OF_DOCUMENT_TOKEN_TO_BE_REPLACED