Skip to content
Become a member and get exclusive access to articles, live sessions and more!
Start Your Free Trial
Home > Features > Mega Nova at the Hollywood Bowl 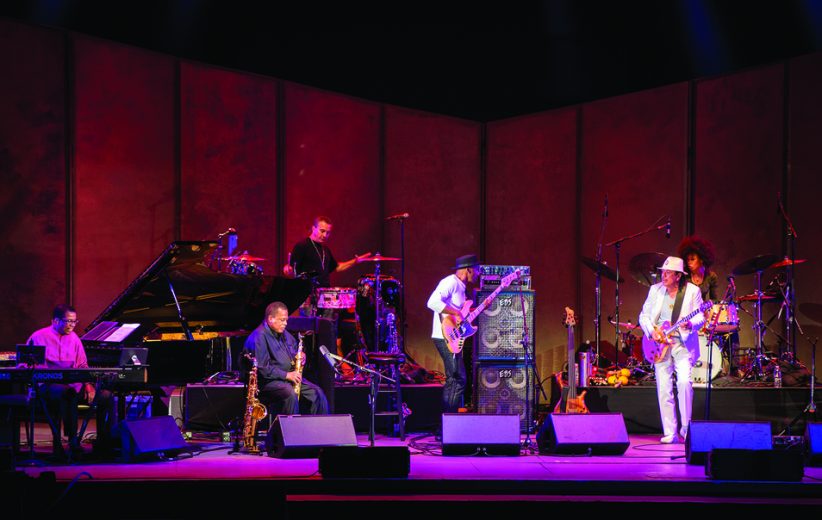 On Aug. 24, the Hollywood Bowl in Los Angeles hosted the first, and to date only, scheduled live performance by Mega Nova, a jazz-rock “supergroup” featuring pianist Herbie Hancock, saxophonist Wayne Shorter, guitarist Carlos Santana, bassist Marcus Miller and drummer Cindy Blackman Santana, with support from percussionist Karl Perazzo. Whether this titanic gathering will appear together again remains to be seen, but if this was indeed a once-in-a-lifetime event, it’s fitting, if unsurprising given this talent, that the result was once-in-a-lifetime music.

The evening kicked off with a set from Stax Revue, an old-school R&B outfit fronted by organist Booker T. Jones. The ensemble presented a crowd-pleasing array of tunes made famous by the stalwart Memphis soul label, including the zesty, island-flavored “Soul Limbo” and Booker T.’s own hit “Green Onions”; on the latter, the organist effortlessly brought mighty groove to one of popular music’s most famous instrumentals, while his son, guitarist Ted Jones, split the sky with phrases that tumbled wildly, then rescaled the heights with thunderous passion. Vocalist Anthony Jawan gave “Try a Little Tenderness” a melisma-driven fervor, with robust support from tenor saxophonist Wes Smith, and Denosh Bennett’s sassy brashness sparked a spunky take on “Mr. Big Stuff.” Booker T. brought the band’s set to a rousing close with his own rough-and-ready vocal lead on Stax’s label-defining empowerment anthem “Respect Yourself.”

Mega Nova’s set took the form of an extended improvisation, the musicians occasionally alighting on recognizable themes before again setting course for uncharted waters. Throughout the mostly continuous performance, Hancock’s piano and keyboards were the unwavering anchor, one moment serving up dense minor-key clusters over which Shorter and Santana traded sonic splinters, the next providing a spectrally droning foundation for shimmering psychedelic explorations. He channeled his inner tavern pianist for a chugging blues interlude with Santana, then conjured mystical electronic filigrees while Shorter’s soprano melded with Miller, on bass clarinet, for a bittersweet evocation.

Santana’s focus on rhythm and groove was prodigious to behold; he spent much of the performance with his back partially to the audience, the better to zero in on the emphatic paired attack of Blackman Santana and Perazzo. In addition to serving up plenty of the gritty shredding that has made his one of rock’s most distinctive guitar sounds, Santana injected slyly witty asides, with unexpected quotes of everything from Stravinsky’s Rite of Spring to Carole King’s “I Feel the Earth Move.” The guitarist seemed to take special delight in his offhandedly inspired exchanges with Shorter; on a freeform medley of the movements of John Coltrane’s A Love Supreme, Santana and Shorter punctuated and completed one another’s ideas like mind-linked twins.

Shorter was in powerful voice, whether squalling his soprano through a thicket of dirty-blues lines from Miller or sighing out delicate, breathy tones on the tenor horn, an elegant seasoning to the roiling sonic mix. His heartbreaking fairy-bird soprano trills on a poignant reading of Cyndi Lauper’s “Time After Time” were a highlight of the evening, and he threw in his own unanticipated-yet-apropos references, tacking broad-shouldered tenor quotes from “Manteca” and “My Favorite Things” onto a sizzling run through Mongo Santamaría’s “Afro Blue.”

Miller’s versatility provided a rich component to the Mega Nova sound. He emphatically thumb-plucked the high tones of his bass to undergird molten slivers from Santana, laid down a poppy gutbucket bedrock over which Blackman Santana and Perazzo boomed forth, and went from trading funky licks with Hancock to backing Shorter’s tenor effusions with feather-light runs. Perazzo’s congas, shakers and timbales amplified Blackman Santana’s rock-oriented beats, and his well-placed chimes brought ethereal mysticism to the performance’s trippier passages. Blackman Santana gave a clinic in fusing elastic musicality with sheer concussive strength. She engaged Santana and Miller with intricate intuition, and took an unaccompanied solo that built from near-whispery strikes of the tom to back-breaking full-kit thrashing, drawing the evening’s wildest ovation without breaking a sweat.

After this extended foray into occasionally off-the-map soundscapes, Mega Nova uncorked a few marquee hits for an encore. A buoyant rendering of Hancock’s celebrated composition “Watermelon Man” segued, with a roar of excitement from the crowd, into Tito Puente’s “Oye Como Va,” transformed by Santana into a Latin-rock classic. The guitarist hopes this band can eventually travel together as “peace ambassadors,” telling Rolling Stone, “We are the frequency to do the opposite of Donald Trump.” Bearing that in mind, it should come as no shock that Mega Nova closed its first-ever live gig with a dynamic version of “The Star-Spangled Banner,” complete with guitar-and-drums freak-out climax. And even if this does turn out to be the band’s sole outing, here’s hoping their message of multicultural cooperation rings out through the Hollywood hills, and far and wide.

Organ trios and quartets were ubiquitous by the mid-1960s. In African American neighborhood bars and clubs up and down the East Coast, throughout the Rust … END_OF_DOCUMENT_TOKEN_TO_BE_REPLACED

Terence Blanchard looked around the restaurant table and launched into a gentle sermon about jazz education in Detroit that was part homily, part pep talk, … END_OF_DOCUMENT_TOKEN_TO_BE_REPLACED

Creating a program of solo piano music is the ultimate challenge for any improvising pianist. The music on my latest album, Ways of Disappearing (Sunnyside), … END_OF_DOCUMENT_TOKEN_TO_BE_REPLACED

First the good news: As you can see in our annual Festival Guide, there are plenty of jazz festivals scheduled to happen around the world … END_OF_DOCUMENT_TOKEN_TO_BE_REPLACED