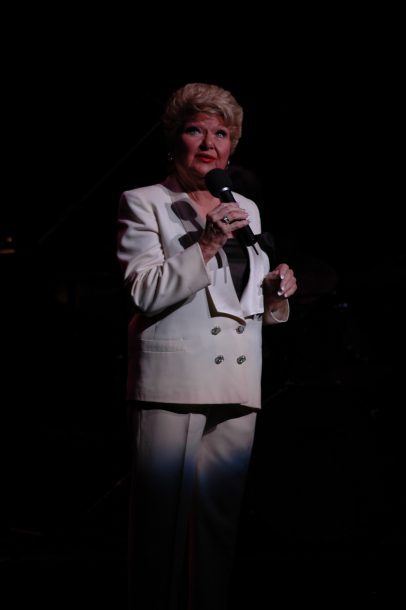 By all rights, Marilyn Maye, who burst onto the national scene around the same time as Barbra Streisand, should have had a Streisand-sized career. All the right cues were in place: coast-to-coast exposure on The Steve Allen Show, a recording contract with RCA that resulted in a series of excellent albums, unprecedented support from Johnny Carson (who welcomed Maye as a Tonight Show guest a record 76 times) and a sterling vocal style that prompted no less an authority than Ella Fitzgerald to single her out as “the best white female singer in the world.”

But major stardom wasn’t it the cards. Still, Maye persevered, carving out a solid career in musical theater and on the cabaret circuit. An indefatigable trooper, she’s still going strong at age 83; still headlining the top spots, including a two-week New York run at Feinstein’s at Loews Regency that continues through November 12 (with a return visit to the Manhattan nightspot already booked for next May).

Though Allen is often credited with discovering Maye, by the time he encountered her in the early 1960s she had already amassed more than a quarter-century’s worth of experience. Her story begins in Topeka circa 1939, when first prize in an amateur contest led to weekly radio appearances on WIBW, the top local station. A few years later, following her parents’ divorce and a move to Des Moines, she landed her own weekly show while still in high school and, upon graduation, signed on as staff vocalist at WHAS in Louisville.

After Louisville, Maye struck out on her own, playing clubs throughout the Midwest. A three-week gig at the Colony, a posh Kansas City establishment, turned into an 11-year engagement. During that period, she made her recording debut with the locally produced (and now extremely rare) Marilyn the Most. It was soon afterward that Allen arranged the first of her several appearances on his syndicated late-night show. RCA came knocking, and Meet Marvelous Marilyn Maye was released in 1965.

Featuring top-drawer arrangements by Manny Albam and Don Costa, it offered up a mix of swinging show tunes and soft ballads, including lush renderings of “Misty” and “Where are You,” plus a terrific, high-octane “Take Five.” Six more albums followed through 1970, including The Second of Maye, captured live at Manhattan’s intimate Living Room, and The Lamp is Low, from which her version of “Too Late Now” was subsequently selected for inclusion, alongside tracks by Sinatra, Fitzgerald and Vaughan, in the Smithsonian Institute’s permanent collection of 20th Century recordings.

Another RCA track, the bouncy title number from her 1967 album Step to the Rear, provided Maye with an interesting sideline. It was chosen as the theme for a series of Lincoln commercials that ran for several years, and Maye traveled the country as the carmaker’s radio spokesperson. (To date only two of her RCA releases-Meet Marvelous Marilyn Maye and The Lamp is Low-have found their way onto CD, issued in 2001 as a twofer on the Collectables label and still in print).

After parting company with RCA in 1970, Maye focused on live appearances and turned her attention to musical theatre, starring in productions of Can Can, Hello, Dolly!, Mame and Stephen Sondheim’s Follies. She has remained in constant demand since, though there was a 14-year gap, beginning in 1992, when she was absent from the New York scene. That changed in 2006, with a triumphant return to Lincoln Center as a special guest at the annual Mabel Mercer Cabaret Convention. More recently, she appeared at Carnegie Hall with the New York Pops, performing “I’m Still Here” as part of Stephen Sondheim’s 80th birthday celebration.

Over the past dozen or so years, Maye has also returned to the recording studio, crafting a half-dozen albums, including a collection of tunes she performed on the Tonight Show (featuring Carson’s personal favorite, Johnny Burke and Jimmy Van Heusen’s “Here’s That Rainy Day”), a Ray Charles tribute and a compendium of songs from Hello, Dolly!, in the liner notes of which composer Jerry Herman praised “her extraordinary combination of acting and singing talent.”

These recent recordings (all available from Maye’s website: MarilynMaye.com), and her ongoing club dates, demonstrate an artist still at the very top of her game. The voice is as impressive as ever, suggesting the power of Eydie Gormé and the purity of Doris Day, her repertoire vast and vivid. In the liner notes to her 2000 release Rapport (a stunning set of ballads with pianist Mark Franklin), Gene Lees singled Maye out as “the best singer I ever heard of either gender, in any language, in any style and in any idiom.”

High praise, especially from the author of two books devoted to the great pop and jazz vocalists and a lyricist whose work has been interpreted by Sinatra, Fitzgerald, Carmen McRae, Mel Tormé, Peggy Lee, Tony Bennett and dozens of others. Peter Nero, who has conducted Maye’s appearances with various pop and symphony orchestras, adds that, “She sets the standard for the way any pop, jazz or big band singer would like to sound.” And, in a 2010 review in the Wall Street Journal, Will Friedwald enthused, “Marilyn Maye is pretty much every singer you ever wanted to hear: She has the rhythm and musicianship of a great jazz singer, the projection and personality of heavyweight Broadway diva, and creates the intimate bond with her audiences that we demand from a cabaret artist.”

Please share your comments and suggestions for future columns below.

Organ trios and quartets were ubiquitous by the mid-1960s. In African American neighborhood bars and clubs up and down the East Coast, throughout the Rust … END_OF_DOCUMENT_TOKEN_TO_BE_REPLACED

Terence Blanchard looked around the restaurant table and launched into a gentle sermon about jazz education in Detroit that was part homily, part pep talk, … END_OF_DOCUMENT_TOKEN_TO_BE_REPLACED

Creating a program of solo piano music is the ultimate challenge for any improvising pianist. The music on my latest album, Ways of Disappearing (Sunnyside), … END_OF_DOCUMENT_TOKEN_TO_BE_REPLACED

First the good news: As you can see in our annual Festival Guide, there are plenty of jazz festivals scheduled to happen around the world … END_OF_DOCUMENT_TOKEN_TO_BE_REPLACED