Skip to content
Become a member and get exclusive access to articles, live sessions and more!
Start Your Free Trial
Home > Features > Manhattan Plaza: At Home 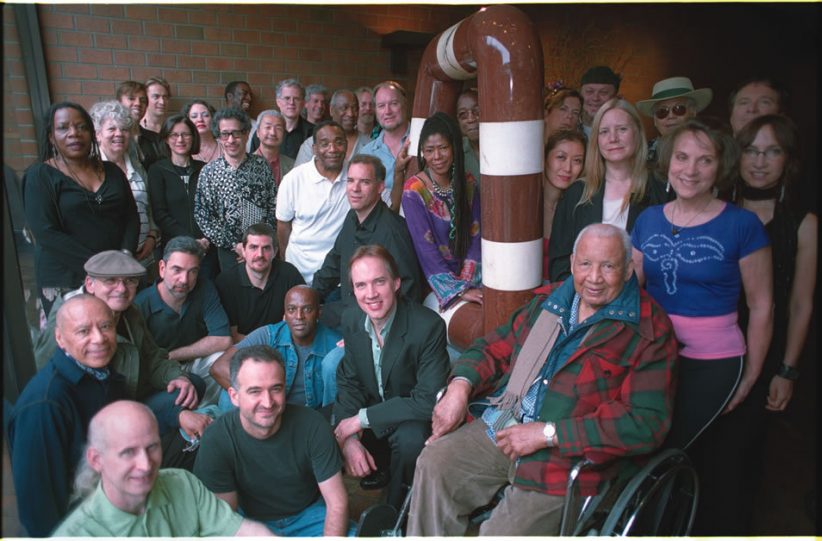 The artists of Manhattan Plaza.

Most musicians can only imagine the hardships experienced by their New York counterparts. In addition to the struggling to get gigs every day, there’s also dealing with a residence: the on-site parking, the tennis courts, the indoor swimming pool, the health club dues.

Tennis courts? Indoor pool? Health club? Yes, for a lucky group residing at an unusual midtown Manhattan apartment complex, those amenities are available, albeit at an extra cost. Welcome to Manhattan Plaza, a dual-towered apartment building a stone’s throw from Birdland and Iridium, as well as a short subway ride from most Greenwich Village jazz clubs.

The subsidized housing project takes up an entire city block between Ninth and Tenth avenues, just north of the Port Authority Bus Terminal and the entrance to the Lincoln Tunnel. Since it opened in 1977 as housing for performers and craft workers in the stage arts, a neighborhood rebirth has grown around it.

Now there are off-Broadway theaters right outside its doors in addition to a cornucopia of international restaurants on Ninth Avenue. But some 30 years ago you practically couldn’t give away space in the 45-and 46-story apartment towers. However, over the years its residents have included Dexter Gordon, Charles Mingus, “a great many people who were with the Ellington orchestra,” and even Seinfeld co-creator Larry David, who at the time was a less-than-successful standup comic living across the hall from the real-life character named Kenny Kramer who was the inspiration for television’s Cosmo Kramer, according to building director of operations Richard Hunnings.

Now, there’s an average six-year waiting list for performing artists who submit an application, Hunnings said. Patience is rewarded with apartments that feature parquet floors, balconies and a matchless location at rents of 30 percent of your adjusted gross income. In addition, the project features a protected block-long plaza one floor above street level between the two towers, where residents can stroll and relax outdoors without actually leaving the buildings.

Despite the profusion of people with subsidized rents, “It was built as a luxury building in the mid- to late ’70s, at a time that New York was going bankrupt,” said Mingus’ widow, Sue, who still lives there. “You can be sure that for the lowly artists there would not be five tennis courts, an Olympic-sized (pool) and squash courts.”

“It was built because there was supposed to be another arts center going up in the general neighborhood, similar to Lincoln Center,” she said. “New York was on the verge of bankruptcy and there was no money for a cultural center, which meant that this was not going to turn into a fancy neighborhood at that time. There were two women beheaded, I think, a week after we moved in here. Some terrible event down the block: it was a street vendetta. There was a lot of action outside on the streets at the time,” she recalled, adding that Manhattan Plaza “was this island of paradise in the middle of it.” Faced with the choice of foreclosure or a partnership with the government, the developers chose the latter, and large numbers of units opened to performers, she said.

“For my career, it’s helped me,” Mantilla said, adding that the proximity to all of the midtown recording studios made his life easier, as well as being close to all those people in the same profession. “This place saved my ass,” he said. Mantilla also mentioned other building services, such as senior citizen programs, free on-site movies and discount tickets to Broadway and Off-Broadway shows, that make the place a good place to live. “It’s like family now, people here,” said Mantilla, who noted that with the recent passing of fellow resident pianist John Hicks, “it was like one of our family that died.”

While he admits that 42nd Street near Tenth Avenue was “viewed as being very dangerous” in the 1970s, Hunnings said, “I always found that the neighborhood, even then, was interesting, exciting. It had a good mix. Now it’s even better, of course, with everything that’s happening here. But interestingly enough, it was really a matter of perception, because in terms of actual crime, this precinct had the second lowest crime rate in the city.”

Prompting from his wife and notices from Local 802 of the musician’s union coaxed percussionist Norman Hedman to investigate the possibility of moving into the complex in December 1977, when he was dividing his time between South Carolina, where his wife taught at a university, and his mother’s house in the borough of Queens.

“It’s close to all of the things that matter to the business, and the networking that you can do here in the building,” Hedman says. (As an example, a group photo organized by Hedman for this article drew some 35 people to a lobby area one rainy Saturday afternoon, and even then not everyone was represented).

Trumpeter Jack Walrath heard about the building from saxophonist Ricky Ford in 1977. Ford has since moved out, but Walrath remains one of the building’s longtime residents. “There’s a lot of people close around that we see all the time,” he said. “I came to New York to live in New York, not in New Jersey,” he added. The scaled rent structure “definitely helps when times are lean,” he said.

“The rents are a fraction of what it would be for similar quarters elsewhere,” Sue Mingus said. “There’re views of the city and of the river and there’re rehearsal rooms. And it’s one of the best-run buildings in the city….They have a sense of beauty and aesthetics, there are always flowers in the lobby and every holiday is celebrated in every possible fashion…with appropriate decorations.”

Trumpeter Jim Rotondi moved into the building in November 1995 after being on the waiting list some six and half years, dating back nearly to the time he first arrived in New York, he said. “My friend (fellow trumpeter and Manhattan Plaza resident) Richie Vitale… is the one who told me about it. We were both working on a cruise ship in Miami before I even moved here, and he told me about this great place that he’d heard about,” he said. “As soon as I got here, basically, I did the paperwork and kind of forgot about it. And when it came around, here I was, all ready.” Rotondi points to the artistic freedom afforded by living in a subsidized building: “Before I moved in here, I was doing a lot of gigs that I didn’t want to do, and Manhattan Plaza completely facilitated my turning those down.

“It means to me that I don’t have to do any gigs that I don’t want to do. That’s what it’s here for,” he said. “In a way, it freed me to really concentrate on playing the way I wanted to play and playing just the gigs I wanted to play so I could do that. At that time, I was playing at Augie’s (now Smoke) a lot…and I just was able to learn so much because of Manhattan Plaza.”

Flute player Jamie Baum said the building’s income-based rent scale “really allowed me to do a lot of creative projects. At one point, I went back to school for my master’s. The way rents are these days in and around Manhattan, it really makes it possible to think a little bit more toward what you choose to spend your time doing. It certainly alleviates some of the stress.”

Pianist Mike LeDonne, who moved in during the summer of 1985, called the building “a miraculous place,” where he and his family live in a 39th-floor apartment. “It’s a really nice community to live in because there’re a lot of great people in here. It’s kind of like a little Renaissance village,” he said. “People really look out for each other in this building…it’s not like you’re alone, you feel like you’re a part of something here.”

“For me, it was really special because John Hicks was my neighbor on my floor for over 15 years,” he added. “So I got to see John Hicks every day at the garbage chute. Or in the hallway. Or going down the elevator. And then all my friends started moving in here. When I first moved in here, Dexter Gordon used to live here…Ram Ramirez….Woody Shaw used to live here.”

Saxophonist Jim Snidero pointed out that the building housed more than jazz musicians. “There are lots of classical musicians in here, too,” he said from his 25th-floor apartment. “As a matter of fact, right around the hallway from me there is an incredible pianist and violin couple that are active in town. And there’re a lot of people like that in here, too. So you can just walk out in your hallway. I was standing at the elevator two hours ago and she was just playing this incredible piano sonata.”

Several years ago, one of Danilo Pérez’s students was suffering from tendinitis. Pianist Pérez was then a professor at the New England Conservatory; his student, … END_OF_DOCUMENT_TOKEN_TO_BE_REPLACED

As a JazzTimes writer, I can talk about the powers of a dynamic drummer until I’m blue in the face: the weight of each tom-tom’s … END_OF_DOCUMENT_TOKEN_TO_BE_REPLACED

There are certain works of art with which I wish I could have a conversation, so that I might express my gratitude for them. I … END_OF_DOCUMENT_TOKEN_TO_BE_REPLACED