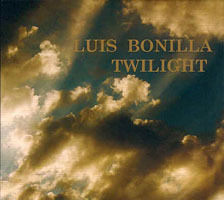 I haven’t had a full-time jazz job since the late 1950s, but I spend a lot of time being regenerated by this music’s life force. I’m also frequently surprised because so much is going on-including music I should have paid attention to over the years. Recently, for the first time I heard Luis Bonilla on his Twilight CD (Planet Arts). After a few bars, I had to get up and shout in pleasure at trombonist-composer-leader Bonilla’s ceaseless creation of an infectiously vibrant group identity: one that brought this listener deep into joyfully bursting swing and luminously searching ballads.

How have I missed this guy? Born in Los Angeles to Costa Rican parents in 1965, he’s recorded with Gerry Mulligan, Freddie Hubbard, Paquito D’Rivera and Toshiko Akiyoshi, whose music I knew when she was still living in Japan. But I missed Bonilla, who considered Lester Bowie his mentor, having toured extensively in the trumpeter’s Brass Fantasy.

Bonilla has been lauded for “exploding” the structures of both jazz and Afro-Cuban music, but very long ago, Duke Ellington told me not to listen by categories of any kind. Hear the individual! I’m now hooked on Bonilla music. (Charles Mingus always insisted that he played “Mingus music.”) A testament to his own disinclination to be categorized, Bonilla is a longtime member of the Vanguard Jazz Orchestra as well as a sideman with Dave Douglas & Brass Ecstasy and Arturo O’Farrill’s Afro Latin Jazz Orchestra. Last year, he toured as part of the SFJAZZ Collective.

In his quintet’s Twilight set, which Bonilla produced, the compositions are supplied by him and the four bandmen: tenor saxophonist Ivan Renta, pianist/keyboardist Bruce Barth, acoustic bassist Andy McKee and drummer John Riley. “The decision,” Bonilla says in a news release, “to ask each member to contribute a composition is not only the next step in furthering our dedication to playing together as a band, but more important, is a documented commitment to guide us in the investigation of each other’s visions, thoughts and concepts of music on a profound level.” Bonilla has also been communicating his own concepts of music as a teacher, first at Temple University and currently as a faculty member at both Manhattan School of Music and New England Conservatory.

As for his resounding identity as a trombonist, it’s not enough to say his sound is personal. In an interview with Franz A. Matzner of Allaboutjazz.com, Bonilla says, “My primary interest is the pure vocal quality of the trombone. It’s in the same range as where I hear my own speaking voice.” That correlates to what Ornette Coleman used to say about getting the human voice into jazz, and Booker Little telling me that the future of jazz should put “much less stress on technical exhibitionism and much more on emotional content-on what might be termed ‘humanity’ in music.”

All the storytellers on Twilight speak in their own human voices in a choir of insistent, self-surprising humanity. The session, Bonilla adds in the release, “is the result of performing, recording and traveling with the same personnel in the band over several years. As a result, a family-like bond is inevitable.”

Also bracingly clear, as I listened to this set repeatedly, is the leader’s assessment that “each musician in the quintet possesses great individual strength and the focus to unselfishly contribute to maximize the end result as an ensemble.” It’s less a matter of being “unselfish” than it is glorifying their shared common humanity-as individually they keep growing together.

Along with the infectiously grooving high spirits of much of this recording, if you want to get away from the insistently invasive discords of daily life-personal and global-I suggest you enter into the private world of “Let It Be Said.” As John R. Wilkins writes in the liner notes, it combines the self-discoveries of “the blues and a hymn. … The tune makes the listener rethink everything that has come before and lets us know that the tensions of the album are not merely stylistic[, but are a] serious accounting of the world of the spirit and the vexed relationship to the everyday.”

At the very end of the notes, Bonilla himself adds, “I have to say it was great fun and an amazing process seeing this recording come to life.” That happened to me as his music now comes, and stays, in my own life.

This experience, starting with my knowing nothing of Luis Bonilla, is more than “the sound of surprise”-Whitney Balliett’s admirable and familiar definition. Once jazz becomes an essential part of you, your own individuality grows with the emotions, memories and continuing desires the music releases from inside you. And once you’re tuned in, you never know what’s coming next that will bring more answers to the title of my favorite Duke Ellington song, “What Am I Here For?”

In the wonderful book Dizzy (Pomegranate Artbooks, 1993), compiled and edited by my fellow Boston boy Lee Tanner-the Dizzy Gillespie of jazz photographers-Dizzy says, “Jazz is the one thing we have that the whole world wants. It’s a kind of meeting place where one man can feel what another does even if they speak different languages. … In jazz a messenger comes to the music and spreads his influences to a certain point, and then another comes and takes you further.”

Takes you into yourself. Luis Bonilla and his soulmates are certainly among these messengers. He came to me late in my life, but he’s strengthened it.

I await the next messengers, from the suddenly new to those who have passed but left their influences, including those late giants I still have to discover. I only have two religions: the Constitution’s individual liberties against government, and jazz, the always open meeting place for self-renewal.

Organ trios and quartets were ubiquitous by the mid-1960s. In African American neighborhood bars and clubs up and down the East Coast, throughout the Rust … END_OF_DOCUMENT_TOKEN_TO_BE_REPLACED

Terence Blanchard looked around the restaurant table and launched into a gentle sermon about jazz education in Detroit that was part homily, part pep talk, … END_OF_DOCUMENT_TOKEN_TO_BE_REPLACED

Creating a program of solo piano music is the ultimate challenge for any improvising pianist. The music on my latest album, Ways of Disappearing (Sunnyside), … END_OF_DOCUMENT_TOKEN_TO_BE_REPLACED

First the good news: As you can see in our annual Festival Guide, there are plenty of jazz festivals scheduled to happen around the world … END_OF_DOCUMENT_TOKEN_TO_BE_REPLACED