Skip to content
Become a member and get exclusive access to articles, live sessions and more!
Start Your Free Trial
Home > Features > Liz and Ann Hampton Callaway Invade the ’60s and ’70s 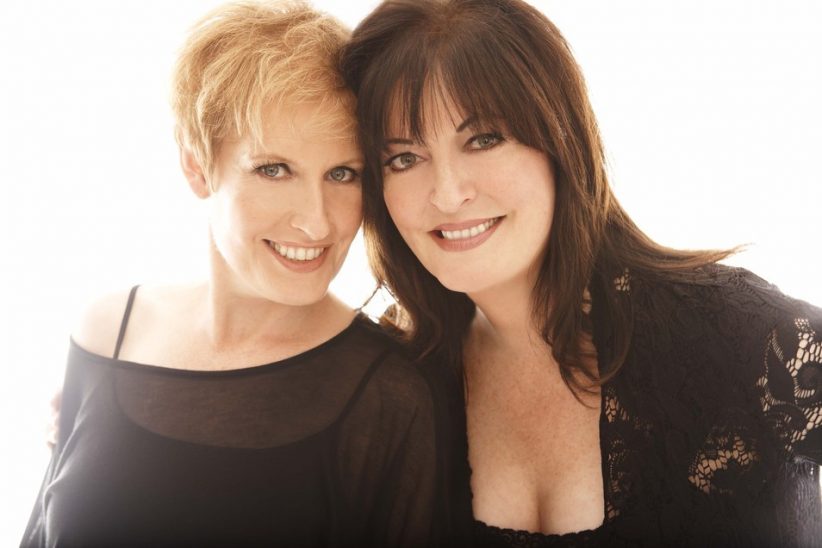 Jazz and cabaret fans know Ann Hampton Callaway for her rich alto, her impeccable taste in standards and her impressive songwriting skills. Ann’s kid sister, soprano Liz, is better known among Broadway first-nighters. Each has, over the past quarter-century, carved her distinct path through New York nightlife, occasionally venturing into the other’s sandbox. Ann starred in the hit musical Swing! and Liz has dipped into the Great American Songbook more than a few times, most notably on her 1993 salute to Frank Loesser, Anywhere I Wander. Sometimes, too, the sisters unite. Whenever they do, the magical effect is always significantly greater than the sum of its musical parts.

Sixteen years ago, the Callaways teamed at Rainbow & Stars for an evening of standards, show tunes and storytelling that Rex Reed described as “an abundance of riches rarer than a Republican drag queen.” The show, punnily titled Sibling Revelry, was captured on disc and released the following year. Callaway devotees have been hoping for a reunion ever since. That wish was granted this past May when Ann and Liz headlined Birdland with Boom!, a joint celebration of the music they (and the rest of the baby boom generation) grew up with throughout the 1960s and early ’70s. Like Sibling Revelry, the equally vibrant Boom! was recorded live, the CD released mid-summer on the P.S. Classics label.

Both sisters have waded into the era’s material before. Ann included “The First Time Ever I Saw Your Face” on her 1997 album After Ours, covered “Will You Still Love me Tomorrow” and partnered with Liz for a marvelous “Moondance” on 2005’s Slow and served up a superb rendition of Joni Mitchell’s “Carey” on her most recent release, At Last. Liz took a much deeper dive in 2001 with The Beat Goes On, a full-length exploration of ’60s pop, and covered “Eleanor Rigby” and “Raindrops Keep Falling on My Head” on 2009’s Passage of Time, which also included an exceptionally fine sisterly duet on Carly Simon’s “That the Way I’ve Always Heard It Should Be.”

Surprisingly, given that it recalls a time of carefree liberalism, the 80-minute Boom! is less raucous than the freewheeling Sibling Revelry, but is every bit as satisfying. Given that Ann and Liz were respectively born in 1958 and 1960, it makes sense that almost all of the material harkens from the late ’60s and into the ’70s, running the gamut from Bob Dylan, Jimmy Webb and Lennon and McCartney classics to the sugary pop of Donny Osmond and the Archies. Ann revisits Joni Mitchell with a stunningly rendered “A Case of You” and takes equally impassioned solo turns on “You’ve Lost That Lovin’ Feeling” and “Blowin’ In the Wind” (the latter inspired, she relates, by dinner-table conversations about topics like civil rights and the Vietnam war led by her father, a noted CBS reporter in Chicago).

Liz twice invades her The Beat Goes On playlist, first for a blending of Webb’s “Didn’t We” and “MacArthur Park” and later to combine “Downtown” with another Tony Hatch/Petula Clark hit, “I Know a Place.” Together they deliver a slinky, stealthy “These Boots Are Made For Walking” and dissect the Fab Four as they meander through “Come Together.”

But, as on Sibling Revelry, the best moments are their clever medleys, each ignited by a delightful tale from their formative years, including Ann’s yearning to be the “Fifth Beatle” and Liz’s desire to become the “Sixth Dimension.” Their bouncy “Back-Seat-of-the-Car” medley surely marks the first time that Janis Joplin, Sly Stone and Donny Osmond have stood shoulder-to-shoulder, though Ann’s feisty handling of “Mercedes Benz” is so terrific that it would have been great to hear more than just a snippet. They also join forces on the quintessential backward-glancing ballad, “The Way We Were,” and close with “You’ve Got a Friend,” aptly citing Carole King’s zillion-selling Tapestry as “the one album that unites us.”

On Sibling Revelry, the showstopper was their 10-minute “Huge medley” (comprised of all the songs their friends insisted should be included in their sister act). Here it is a nine-minute Stevie Wonder medley, warming up with Ann’s towering “You and I” and Liz’s cheery “You Are the Sunshine of My Life” and then hitting full, collaborative steam through “Sir Duke,” “Livin’ for the City,” “Isn’t She Lovely,” “Don’t You Worry ‘Bout a Thing” and “For Once In My Life.”

Boom! is currently available on Amazon and iTunes.

If you’d like to share your comments about Liz and Ann Hampton Callway or have suggestions for future installments of Hearing Voices, please email jtvocaljazz. You can also follow Christopher Loudon on Twitter @CWLoudon.

First the good news: As you can see in our annual Festival Guide, there are plenty of jazz festivals scheduled to happen around the world … END_OF_DOCUMENT_TOKEN_TO_BE_REPLACED

Steve Lacy was once a brilliant bebop player. Yet conventional wisdom says the opposite. Many have long argued that a key to the innovative soprano … END_OF_DOCUMENT_TOKEN_TO_BE_REPLACED

What is a jazz film? Does it have to be a film about jazz and the people who play it? Or can it also be … END_OF_DOCUMENT_TOKEN_TO_BE_REPLACED

Films that tell stories about jazz open a revealing window on the place and perception of the music within popular culture. See Kevin Whitehead’s compelling … END_OF_DOCUMENT_TOKEN_TO_BE_REPLACED