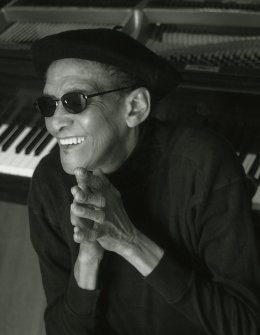 On January 12, 2011 I had the pleasure of talking via telephone with the legendary NEA Jazz Master, ‘Little’ Jimmy Scott.

I was advised by his dear wife that, at the wonderful age of 85, Jimmy Scott would not be able to talk very long about his multi-decade career due to his health, but that he was extremely happy to take whatever time he could to speak with me about his wonderful, lifelong love affair with music. And so we did!

Gigi Brooks:I’m going to start with a question I’m sure everyone wants to know and that’s how it all began and who gave you your first opportunity?

Jimmy Scott: You know I’m going to tell you…it might sound funny, but I was in school when my first opportunity came to me to be introduced to the public. I was in school, in the class and I had a drama teacher and she liked the arts and she would create plays for us to do and she picked me to do the story of “Ferdinand the Bull” [laughs]. I had to sing that song which was the theme song for the movie. Anyway, she had me do the song and had the fellas on the stage with me; they were the Matadors … you know, in the play. So we did these plays and then I became known as the “Singer.”

The “Singer” in school. I became known as the “Singer” in school and all the kids would talk about it when we were out of school. From there my career went into….ahh…..I went on the road with Estelle Young, she was an artist herself. A creative dancer she was. However, the kids around town who had a little talent… we all joined together and Estelle organized a show that could go on the road and it began my first entrance to knowing about traveling on the road with a show and that was first experience of being with a show, with Estelle Young’s show.

So, Estelle Young was your first experience in the business.

Yes. What a great thing it was, because it was educational, it was fun and it was good to be loved you know? And that was it.

Yes, I do. Was it an easy road for you in those days? Did you find it took you a while or did people show favor towards you?

Well, I began getting calls to come to different places and sing numbers for groups of people that I knew in the town, of course and actually what made me interested was the fact that we didn’t have radio or record players back then. Of course, when I got an opportunity to listen to the radio I was listening to artists like Paul Robeson and all of those classical standard vocalists at the time like Bing Crosby, you know all any of the interesting musicians and artists that were growing at the time. Lester Young, the great saxophone player. He always played with Billie Holiday and I became attracted to things that he did with her; tunes that he did with her and all and of I course worked with him at one time in Pennsylvania. I got the opportunity to work with him in Meadville, Pennsylvania and it was a new club and I’m sitting in the dressing room listening to the good music that they were playing then they invited me out and made me sing on stage; and that introduced me to the public. You know, there in Meadville. After that, of course, different clubs tried to get me to come to their places to sing, but I was under age and I couldn’t just up and travel and go in those clubs without an adult, you know, being involved.

Because you were so young.

Yes. I was a couple of years younger than necessary. You know, I had to be seventeen or eighteen years old, before I could get out and sing in the public like that, because of the alcohol and all those things. They were serving alcohol in those clubs and my being too young, I was under age and I wasn’t allowed to be in there.

You were already in high demand as a teenager.

That’s pretty awesome! Was there any time when you felt like singing wasn’t something that you wanted to do? Or, did you already know?

No, no, no. That was my love. It grew to be my love immediately. I never felt that there was any place for me on this earth, but being in show business.

So show business is where you always knew that’s where you were supposed to be.

I read that you were influenced by many people, but out of all of those people to this very day, which one still leaves you in awe?

Well he was a very classic artist. One of our great classic artists and I found him to be a very, unique musical story teller. He would take a song and when he sang it, it was like you were listening to a story.

I understand what you mean. I have listened to his music and it is like a story. We all know your voice is magnificent and we’re in awe when we listen to you. Your voice is extremely unique and I understand that it is Contralto and for those listeners who may not know what Contralto is, it falls between a First Tenor and Mezzo Soprano.

Did you find that it’s been to your advantage or disadvantage to have that vocal range in getting work in the industry?

Well, I can say it leaned between both sides of the situations. There were many times that club purchasers wanted a female singer and I had the voice. I was born like that and when I sang, I sounded like a female to them, but when I got to their clubs, they acted like they were disappointed because I wasn’t a girl.

So you’re saying when they heard your voice in recordings they thought you were female, but when you got to the club they were disappointed?

Yes. I wasn’t. I had that to defeat during my career. You know, I had to go through defeating that attitude and things were not very well to that extent. I had a little problem with that.

Maybelle was like my sister. She would be in the club with me, we’d be working in the club together and she would come in and say “Big Brother, I’d say “yeah, baby’ she would say, “I’m singin’ such n’ such a song tonight.” I’d say “oh, okay.” She sang my tunes, I sang some of her tunes sometimes and we exchanged the music together; that was quite an experience. We were with Estelle Caldonia and Estelle had a show called “Caldonia’s Review.” You see, she was named after Louis Jordan’s song. She did a dance to that music and he named her Caldonia and she used it in show business, you know? When she put her show together and got her group of people to go out and travel with her all through the south; it was known as “Caldonia’s Review.”

You have so many people who have been following you. Movie stars, big rock stars, even Madonna says that you’re the only vocalist who can make her cry. That says a lot about your voice. From all of your experience in this industry and the many decades that you’ve been bringing us your wonderful voice and music can you please tell me what advice you have for those singers out there who are struggling and trying to become recognized for their work?

I tell them most of the time to take it slow, take it slow and study your music before you sing it so that you know what you’re singing and if you do that and do that well, there will come success. Study the lyrics so you know what you’re saying. It gives them more of an advantage to put themselves in there musically which will then attract the audience, because the audience feels like they are singing to them and they become attached as listeners to the vocals and that of course helps to build their attraction in the business. Also, the main thing is to learn respect to their fellow man and the music industry. Respect is most important.

Organ trios and quartets were ubiquitous by the mid-1960s. In African American neighborhood bars and clubs up and down the East Coast, throughout the Rust … END_OF_DOCUMENT_TOKEN_TO_BE_REPLACED

Terence Blanchard looked around the restaurant table and launched into a gentle sermon about jazz education in Detroit that was part homily, part pep talk, … END_OF_DOCUMENT_TOKEN_TO_BE_REPLACED

Creating a program of solo piano music is the ultimate challenge for any improvising pianist. The music on my latest album, Ways of Disappearing (Sunnyside), … END_OF_DOCUMENT_TOKEN_TO_BE_REPLACED

First the good news: As you can see in our annual Festival Guide, there are plenty of jazz festivals scheduled to happen around the world … END_OF_DOCUMENT_TOKEN_TO_BE_REPLACED