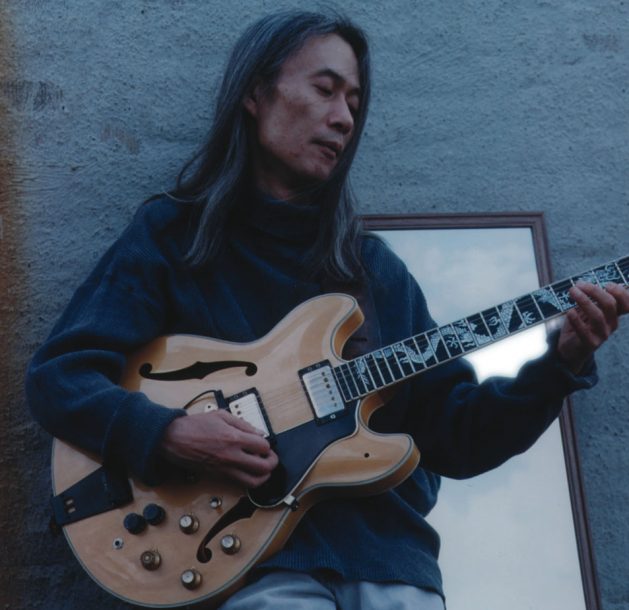 There was a period of time in the mid-’80s when guitarist Ryo Kawasaki fell deeply under the spell of computers. He became so immersed in exploring the potential of MIDI technology, working 12 to 16 hours a day writing music software programs for the Commodore computer, that his guitar sat in the corner untouched, collecting dust. During this techno phase, the one-time sideman to Gil Evans, Elvin Jones, Chico Hamilton and Dave Liebman produced a series of high-charting 12-inch dance singles that mixed free-style, house, acid house and ambient sounds, all done entirely in his home studio. He formed his own Satellites Records in 1987 to release his techno dance music.

By 1991, Kawasaki returned to playing after being signed by the new jazz and adult contemporary Japanese label One Voice. In addition to releasing the beautiful solo acoustic guitar album, Here, There and Everywhere, he produced and performed on two albums by Brazilian singer and guitarist Camilia Benson for One Voice. He followed up with another solo acoustic album, My Reverie (music from Bill Evans, Debussy, Ravel and Gershwin), and the electric guitar-oriented Love Within the Universe, which received considerable NAC airplay across the country.

All of these One Voice releases have since been licensed for Stateside release by Kawasaki’s Satellites Records.

Satellites has expanded from its initial dance music base and is now getting deeper into jazz, amassing a roster of artists that includes drummer Victor Jones, singer Kimiko Itoh, pianist Miki Kono and the popular Japanese ensemble Yoshio Suzuki & East Bounce. Kawasaki is also reissuing some of his own albums from the early ’80s that originally appeared on such labels as Sony and East Wind, including Mirror of My Mind with Michael Brecker, Harvey Mason, Anthony Jackson and Leon Pendarvis.

“The fact is that I’m not playing as much as I should be because I’m so busy running the label and producing the new albums,” says the native of Tokyo, who settled in New York City in 1973. “But my quintet has been rehearsing and making in-store appearances to promote my latest album, Sweet Life. And once we start getting the bookings for club appearances, we’ll be smoking.”

The group (Lincoln Goines on electric bass, Victor Jones on drums, Ray Nakari on keyboards, Everil Brown on congas) recently taped a one-hour live studio performance for BET on Jazz, scheduled to air in September. They also continue to make in-store appearance on the East Coast at Coconuts, Tower and HMV outlets. “This is a new way of promoting records,” says the Satellites label head. “It doesn’t really make any money as a performance vehicle, but the record sells right there. When we play an in-store, we move 50-100 copies of the record that day. In the New York Coconuts, for instance, Sweet Life entered the Top 20 for the entire store sales. So it seems to be a good alternative to radio play, if the music is good.”

Kawasaki has no immediate plans to return to creating computer-generated dance tracks, though he says a top Japanese DJ group called Cosmic Village is currently remixing some of his ’70s material. “I’m going to release that and I may have to add more tracks to fill out an entire CD. So I may produce more dance-oriented tracks later this year.”

But for now, the focus of Satellites is on jazz.

“Dance music requires a lot of promotional costs and also the shelf life is a little too short to work with that kind of product,” says Kawasaki. “But jazz is a much longer-lasting product, and that’s where I originally came from anyway. So I feel comfortable doing the jazz again.

“I’m interested in letting artists express themselves,” he continues. “If we happen to get some radio play from a particular project, that’s fine. But I don’t plan to produce something simply to get airplay on NAC or smooth-jazz stations. That kind of music doesn’t inspire me. It’s almost like background music for when you’re eating dinner or something. I think people are looking for a little more. And that’s what we are committed to doing at Satellites.”

Steve Lacy was once a brilliant bebop player. Yet conventional wisdom says the opposite. Many have long argued that a key to the innovative soprano … END_OF_DOCUMENT_TOKEN_TO_BE_REPLACED

What is a jazz film? Does it have to be a film about jazz and the people who play it? Or can it also be … END_OF_DOCUMENT_TOKEN_TO_BE_REPLACED

Films that tell stories about jazz open a revealing window on the place and perception of the music within popular culture. See Kevin Whitehead’s compelling … END_OF_DOCUMENT_TOKEN_TO_BE_REPLACED

Sponsored When he titled his 1959 album The Shape of Jazz to Come, Ornette Coleman probably didn’t expect that shape to be a familiar one. … END_OF_DOCUMENT_TOKEN_TO_BE_REPLACED