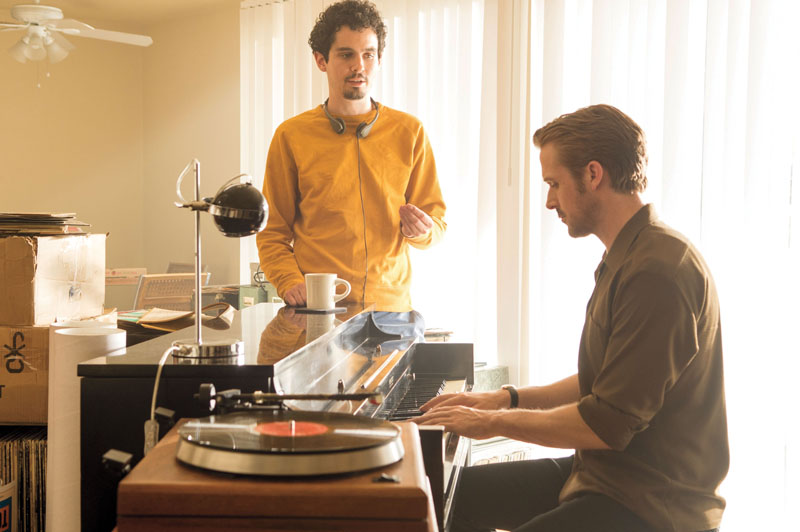 I had a grand time defending Damien Chazelle’s 2014 film, Whiplash, as it made its ascent toward the multiplexes. Whether cynical or idealistic, jazz defenders took aim at this tremendously entertaining flick early and often, as if refusing to realize that Chazelle used jazz education as the springboard for a fine genre movie, or a few of them at once—psychodrama, horror, sports. Over and over, I heard or read a preposterous argument that a better film would’ve accurately portrayed the joys and challenges of formal jazz mentorship. Until Clint Eastwood directs my spec script, Jamey Aebersold’s Summer Jazz Workshop: The Awakening, give me a break. Or, to quote the great playwright David Mamet: “[Drama is] not about nice things happening to nice people.”

More important, for all its missed or weird details—I recall a rival-drummer character at the elite school admitting he can’t memorize tunes—Whiplash understands the melodramatic, adolescent plight of the ambitious music student: the nerves, the competitive fury, the dreams of grandeur, the self-sabotaging perfectionism, the self-righteous dedication. I suspected Chazelle was writing from experience, and I was right. “There was a phase in my life, it was mainly high school into college, where music and specifically jazz drumming, as you see in Whiplash, was everything for me,” Chazelle told NPR’s Terry Gross. “It had a lot to do with a very intensive jazz program at my high school that I was a part of, and a very demanding teacher, and certain emotions I felt as a young player, where the kind of enjoyment and appreciation of the art of music was inextricably wrapped up in fear and dread and anxiety about getting something wrong.”

Chazelle’s blockbuster follow-up, La La Land, is a terrific contemporary musical with memorable songs and striking choreography, and an artful paean to cinema history. And below its sweet, surprising love story is a convincing grasp of Hollywood’s seductive pull—the elusive, sometimes soul-crushing sense of possibility that has lured young Americans westward for over a century.

The film also deploys ideas about jazz, though I don’t get a similar sense of knowledge at its core. Rather, La La Land comes off like a studio executive’s version of what they imagine the story of a jazz hopeful to be, with dialogue and a narrative gleaned through the general culture, and without having spoken to musicians or stepped foot inside a jazz club. Let’s tick off a few head-scratchers to start. The aspirations of actress Mia (Emma Stone) would certainly compel her toward Hollywood. With no disrespect to the robust, multifaceted scene that is L.A. jazz, the idea that Mia’s love interest Sebastian (Ryan Gosling) would choose Tinseltown as his place to make it is laughable. Sebastian is a surly, doggedly nostalgic pianist, odd but not entirely imagined, who’d find far stronger career prospects in New York, New Orleans or even Chicago. In fact, the well-paying R&B/pop gig he gets with Keith (John Legend)—work he resents deeply, being the traditionalist dweeb he is—is exactly the sort of commercial job a jazz-trained player might move to L.A. to score.

Homing in, there’s a scene in which the current Lighthouse Cafe—host of Sunday jazz brunch and Wednesday jazz happy hour but more rock, reggae, soul and salsa—appears as a Savoy Ballroom fantasy. Sebastian’s obsession with such an arcane subject ramps up his kooky charm, provides him with a series of self-imposed obstacles, and grants him conversational power to wield—trite talk that can evince the feeling a serious jazz fan gets when reading those clueless daily-newspaper articles about how jazz is dead or being resurrected by Kamasi Washington. Inevitably Sebastian explains how jazz is “dying” to Mia, who, being young, attractive and female, has of course already admitted that she hates jazz. Instead of recording or apprenticeship or garnering press, Sebastian’s burning desire is to open a club where he can pursue “pure jazz,” maybe with comrades who also listen to bop on cassette and own Hoagy Carmichael’s used furniture.

The question is, do these shortcomings truly undermine the film? Would script revision by Gary Giddins have done it any major favors? Probably not. The best and smartest representations of jazz onscreen—Round Midnight, Treme, The Gig, Born to Be Blue, Low Down—seek their strength in good old-fashioned realism. But the nuances of cultural criticism and intellectual cinema, in a film where an ersatz Fred and Ginger dance weightlessly out of the Griffith Observatory, wouldn’t have communicated much to La La Land’s date-night patronage. And clichés, when delivered to a mass audience, can be more useful than writing that strives to capture the mechanisms of a subculture. Athletes disparage sports films, stable hands resent Seabiscuit, and Neil deGrasse Tyson has made a hobby of respectfully dismantling science fiction. In other words, it’s better to have “pure jazz” in a Hollywood blockbuster than no jazz at all.

Organ trios and quartets were ubiquitous by the mid-1960s. In African American neighborhood bars and clubs up and down the East Coast, throughout the Rust … END_OF_DOCUMENT_TOKEN_TO_BE_REPLACED

Terence Blanchard looked around the restaurant table and launched into a gentle sermon about jazz education in Detroit that was part homily, part pep talk, … END_OF_DOCUMENT_TOKEN_TO_BE_REPLACED

Creating a program of solo piano music is the ultimate challenge for any improvising pianist. The music on my latest album, Ways of Disappearing (Sunnyside), … END_OF_DOCUMENT_TOKEN_TO_BE_REPLACED

First the good news: As you can see in our annual Festival Guide, there are plenty of jazz festivals scheduled to happen around the world … END_OF_DOCUMENT_TOKEN_TO_BE_REPLACED