Skip to content
Become a member and get exclusive access to articles, live sessions and more!
Start Your Free Trial
Home > Features > Kay Thompson: Life of the Party 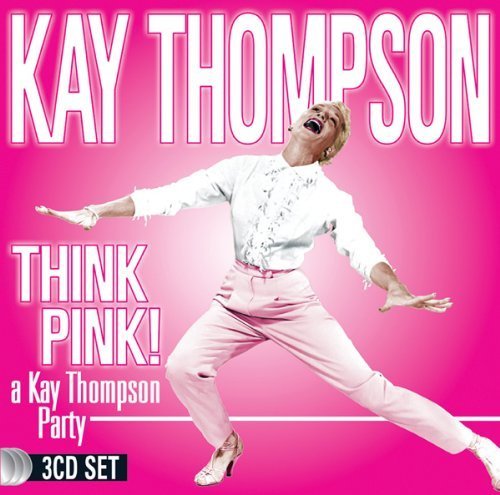 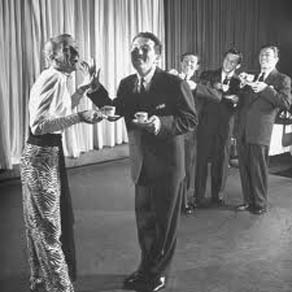 A half-century before Meryl Streep played icy editrix Miranda Priestly in The Devil Wears Prada, Kay Thompson cornered the market on larger-than-life fashionistas with her turn as Maggie Prescott in Funny Face. Sadly, the few people who today still recognize the name Kay Thompson, remember her primarily for that single screen role, and particularly for her character’s one-woman campaign to turn the entire world rose-colored with her take-no-prisoners performance of the campy “Think Pink.”

Fortunately, with the publication Kay Thompson: From Funny Face to Eloise (Simon & Schuster), biographer Sam Irvin not only rescues Thompson from unjust obscurity but also examines the remarkable multifacetedness of a career that spanned six decades. And he does so with the sort of vivid panache that was Thompson’s lifelong stock-in-trade.

Born Kitty Fink in St. Louis (where she attended school alongside Tennessee Williams), Thompson made her performance debut in 1926, age 16, as piano soloist with the St. Louis Symphony. Though her affiliation with the symphony lasted three years, Thompson preferred popular music and was as anxious to not just play but also sing the hits of the day. She got her chance on local radio, rapidly building a significant following. Before long, she was off to New York where, jumping from show to show and network to network (occasionally toiling simultaneously for competing broadcasters) she gradually achieved a degree of national recognition. (Thompson would, however, forever remain most popular in major urban centers; her brand of haute sophistication simply didn’t play well in Peoria).

Though opportunities presented themselves, success on records and on Broadway eluded Thompson, and always would. But upon creating a supporting vocal group called the Rhythm Singers, she discovered a real gift for vocal arranging, a skill that would last a lifetime and influence the careers of, among others, Frank Sinatra, Judy Garland, Liza Minnelli, Lena Horne Marlene Dietrich, Noel Coward and Andy Williams.

In 1937, Thompson married celebrated trombonist Jack Jenney, a union that lasted less than three years thanks to Jenney’s chronic womanizing and alcoholism. Soon afterward, Thompson became romantically involved with radio producer Bill Spier. They married in 1942. Spier’s greatest success was the weekly mystery series Suspense. Early in the show’s run, Spier discovered that ratings increased, often dramatically, when big-name stars were cast in lead roles. Many of the top names on Broadway became Suspense headliners, as did movie stars who happened to be visiting New York. But the A-list talent pool was much deeper in Hollywood, and Spier convinced his CBS bosses that it made sense to relocate production to Los Angeles to capitalize on the wider availability of big names. Thompson, who had been working both coasts with various radio projects for years, was happy to make L.A. her permanent home. She and Spier set up housekeeping at the iconic Garden of Allah apartments, where their neighbors included Humphrey Bogart (soon afterward joined by Lauren Bacall), Errol Flynn, John Garfield, Frederic March, Artie Shaw, Benny Goodman and Woody Herman.

Thompson still had dreams of movie stardom, but soon discovered that her talents primarily lay on the other side of the camera. Joining MGM, then the most prestigious studio in town, she went to work as resident vocal coach and arranger, assigned to assist everyone from contract players to major stars with their musical performances, and attaching herself to the fabled Freed Unit, led by producer Arthur Freed, the most elite of the elite studio’s production teams. Thompson immediately established a lifelong friendship with Judy Garland. (The pair became so close, that Garland and Vincente Minnelli chose Thompson as godmother when their daughter Liza was born in 1946.) Though Thompson’s was exclusively contracted to MGM, she still found time for clandestine side projects, coaching Danny Kaye and Sinatra (who would himself land at MGM in ’46). Thompson’s work, often uncredited, enhanced such classic MGM productions as The Harvey Girls, Anchors Aweigh, Meet Me In St. Louis and Ziegfeld Follies, for which she crafted the brilliantly witty “Madame Crementine” number, originally intended for Greer Garson (and plainly a clever send-up of Garson’s rarified airs) but ultimately performed by Garland.

Come 1947, Thompson split with both Spier and MGM. At professional loose ends, the indefatigable mistress of reinvention decided to take to the stage with a nightclub act that reflected all of her stylish pizzazz. For her act, Thompson needed the assistance of four chorus boys, and found the ideal candidates in quartet of brothers from Iowa – Bob, Don, Dick and Andy Williams. The act debuted in Vegas, at the Meyer Lansky-ruled El Rancho casino, in August 1947. Thompson’s high-spirited antics drew unilateral praise. She would, with and without the Williams, continue to attract SRO crowds at the top nightspots in New York, L.A., Vegas, Chicago, Miami and London for most of the next decade. Concurrently, she became romantically entangled with young Andy (17 years her junior), an affair that would last, off and on, until the early ’60s, with Williams firmly established as one of the world’s most popular entertainers.

1957 brought the release of Funny Face, finally providing Thompson the sort of big-screen exposure she’d long craved. Many reviews credited her with stealing the film from co-stars Audrey Hepburn and Fred Astaire. But the promise of late career movie stardom proved short-lived. Thompson’s only subsequent film appearance of note would come more than a dozen years later with a sort of Grand Guignol supporting role opposite Minnelli in 1970’s Tell Me That You Love Me Junie Moon.

By the mid-1950s, Thompson’s soigné brand of cabaret had fallen out of favor as more and more club habitués opting to stay home in front of the TV. But the ever-enterprising Thompson had another trick up her sleeve. For decades she had entertained friends with her vocal characterization of a bratty little girl named Eloise. Teaming with illustrator Hilary Knight, she finally immortalized Eloise in print in late 1955. The book became a runaway bestseller, prompting lines of children’s dolls, toys and fashions, recordings and TV specials, and eventually spawning four additional volumes: Eloise In Paris, Eloise In Moscow, Eloise at Christmastime and, more than a decade later, Eloise Takes A Bawth.

The 1960s found Thompson at loose ends. She continued to work with Garland, Minnelli and Williams (who included her wild reworking of “Jingle Bells” on his now-classic 1963 Christmas album) and had a behind-the-scenes hand in the success of two seismic entertainment achievements that bookended the decade: Garland’s triumphant 1961 appearance at Carnegie Hall and Minnelli’s Oscar-winning performance in the 1972 screen adaptation of Cabaret. By the 1980s, she was all but unemployable and dead broke. Minnelli came to the rescue, paying her rent and providing financial assistance for the rest of Thompson’s existence. Ironically, toward the end of her life, the woman who never missed a party and, indeed, typically was the party, had become a virtual recluse. She died just six weeks after Sinatra, on June 19, 1998.

Thanks to painstaking research and revealing interviews with such pivotal figures as Minnelli, Williams and Knight, Irvin fully grasps Thompson’s Auntie Mame vivacity. But he also includes the warts. Thompson could be mean-spirited, jealous of her friends’ achievements and was notorious for stealing the spotlight from deserving others (Knight particularly), and her shortcomings are as well documented as her assets. A superbly crafted portrait of one of the least appreciated giants of 20th-century American show business, Kay Thompson: From Funny Face to Eloise fully manages to, as Minnelli states in her back-cover blurb, “capture that lightening in a bottle. Hang on to your hair!”

If you want to delve further into the magical world of Kay Thompson, check out Think Pink! A Kay Thompson Party (Sepia Records). The three-disc, 75-track retrospective includes all her commercial recordings (including several Eloise tunes) and all of her tracks from Funny Face. There’s also Minnelli’s 2009 CD and DVD Liza’s at the Palace, featuring her recreation of several numbers from Thompson’s nightclub act.

If you’d like to share your comments about Kay Thompson or have suggestions for future installments of Hearing Voices, please direct your email to [email protected]

Organ trios and quartets were ubiquitous by the mid-1960s. In African American neighborhood bars and clubs up and down the East Coast, throughout the Rust … END_OF_DOCUMENT_TOKEN_TO_BE_REPLACED

Terence Blanchard looked around the restaurant table and launched into a gentle sermon about jazz education in Detroit that was part homily, part pep talk, … END_OF_DOCUMENT_TOKEN_TO_BE_REPLACED

Creating a program of solo piano music is the ultimate challenge for any improvising pianist. The music on my latest album, Ways of Disappearing (Sunnyside), … END_OF_DOCUMENT_TOKEN_TO_BE_REPLACED

First the good news: As you can see in our annual Festival Guide, there are plenty of jazz festivals scheduled to happen around the world … END_OF_DOCUMENT_TOKEN_TO_BE_REPLACED