Skip to content
Become a member and get exclusive access to articles, live sessions and more!
Start Your Free Trial
Home > Features > Julie London Is Her Name 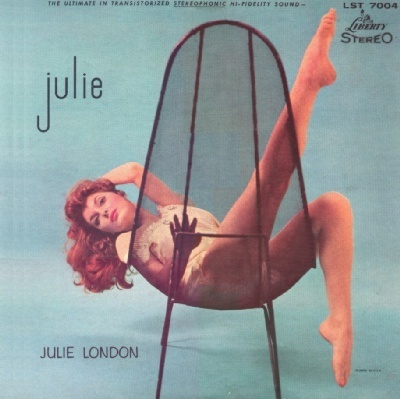 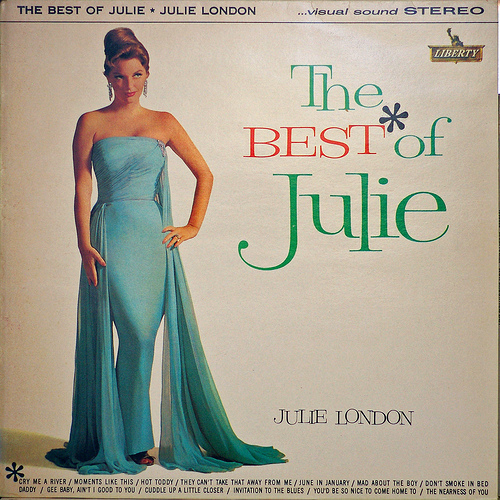 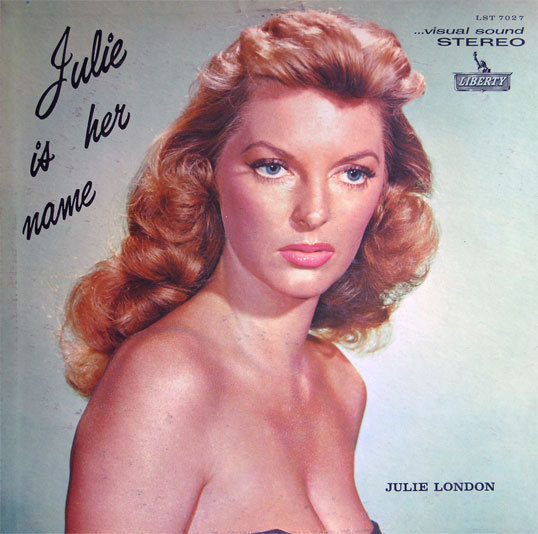 Among Mad Men devotees, it’s a popular assumption that Betty Draper, the blonde knockout of a New York suburbanite played by January Jones, is closely modeled on Grace Kelly. But I’d argue a better archetype for Betty is Julie London. Whereas it is difficult to picture Princess Grace as anything but icily regal, it’s easy to imagine London as both the tigress of a Westchester boudoir and a poised and perfectly coiffed housewife, as capable of whipping up a last-minute soufflé for hubby and his boss as she is at bagging bologna sandwiches for the school bus-bound kiddies. Indeed, a fair argument could surely be made that the phrase “bedroom community” was coined in London’s honor.

With her throaty, smoky voice – as playfully seductive an instrument as ever crafted – London was certainly a skilled temptress. But she never played the goddess. Her appeal wasn’t of the unattainable Rita Hayworth or Lauren Bacall variety. Instead, she cleverly cast herself as the sexy girl next door (leaving the wholesomeness to Doris Day), the gal at cocktail parties who would send every man in the room fumbling for his lighter whenever she reached for a cigarette. As a recording artist she was, perhaps more so than any other, entirely a product of her time. No wonder her career began in the mid-’50s, just as America was starting to shake off its chastity belt, and ended in 1969, when a female singer actually in tune with the misogynistic sentiments of Burt Bacharach and Hal David’s “Wives and Lovers” was suddenly outré in a society redefined by the sexual revolution and women’s lib.

Which is not to suggest that the character London played on her albums (and it was a character, as much as the ones she portrayed on film and television) was a pushover. Listen to London purr “My Heart Belongs to Daddy” or “An Occasional Man” or “Take Back Your Mink,” and it is immediately evident that she could reduce even the most feral wolf to a whimpering pup. When she invited you to “Come On-A My House” you knew it wasn’t for apples or plums but to indulge in more forbidden fruit, and when she demurely suggested that “Nice Girls Don’t Stay for Breakfast,” her closing request to ‘pass the jam’ was a foregone conclusion.

Those who know London only for her 1955 mega-hit “Cry Me A River” – which, despite hundreds of intermediary versions, remains definitive – or for her co-starring role as nurse Dixie McCall on the long-running NBC series Emergency, are often surprised by the depth and breadth of her recording career. Apart from four tracks for an album shared with Carmen McRae and Chris Connor for Bethlehem, London toiled solely for Liberty. As the story goes, her second husband, singer-songwriter Bobby Troup, tried to interest all of the major labels in London, but was turned down flat. So, he approached the then fledgling Liberty, which took a chance on London and earned its first million-seller with “Cry Me A River” (only the label’s sixth single release). The relationship latest 15 years until United Artists (Transamerica Corporation) purchased Liberty and London chose to retire from recording. She would subsequently revive her singing career only once, covering “My Funny Valentine” for the soundtrack of the 1981 Burt Reynolds film Sharky’s Machine.

Over the course of her decade-and-a-half (1955-1969) at Liberty, London released 29 studio albums, one live session and three greatest hits compilations. In other words, among artists geared toward more mature listeners, she rivaled the biggest sellers of the day – Sinatra, Mathis, Streisand – in terms of output, and easily outpaced such seminal figures as Fitzgerald, Vaughan, Tormé and O’Day.

And London has done surprisingly well in terms of CD reissues. Of the 30 albums that shape her oeuvre, two-dozen have appeared on disc, including a smattering of domestic re-releases, many pricey Japanese pressings and a host of twofers from EMI in Britain. There have also been numerous compilations, including a 22-track retrospective issued as part of Capitol’s Ultra-Lounge series, many of which include tracks from the few albums that haven’t been reissued. Yet despite such impressive CD coverage, collecting London material has never been easy. The Japanese discs have drifted in and (more often) out of print, and EMI discontinued its twofer program with about half the London catalog not covered.

But this month, at long last, almost the entire London catalog is being re-issued in one massive wave. The discs, packaged in mini cardboard sleeves that replicate the original cover art, comprise all 30 Liberty albums (excluding the greatest hits releases). The series is available via the CD Japan website (www.cdjapan.co.jp). Based on the current exchange rate, they’re reasonably priced at roughly the equivalent of $18 each, plus shipping and handling (on amazon.com, by comparison, they’re listed for pre-order at $31.98 each).

Amazon’s listing of several hundred London discs reveals that 22 of the 30 albums can be obtained relatively easily and inexpensively. First, there are five domestic releases still in print, including her debut album, Julie Is Her Name (1955) plus Around Midnight (1960), the 1965 Cole Porter collection All Through the Night, her sole live recording In Person at the Americana (1964), and her final album, the campy collection of molasses-slow rock covers Yummy, Yummy, Yummy from 1969.

Which, for the diehard completist, leaves nine you’ll have to add from the new Japanese releases:

1. Julie Is Her Name, Vol. II (1958), which was briefly available on a twofer with the original Julie Is Her Name, a ballad-focused collection that includes London’s fine, low-key renditions of “Spring Is Here,” “Little White Lies” and “The One I Love Belongs to Somebody Else.”

2. Swing Me An Old Song (1959), an unusual collection of creaky tunes like “After the Ball,” “Comin’ Through the Rye” and “By the Beautiful Sea.” Still, you’ve never heard “Camptown Races” delivered with such sultriness.

3. Send for Me (1961). Several of the dozen tracks, including London’s steamy cover of the title tune, have appeared on compilations, but the entire album has never previously been released on CD. London’s renditions of “I Must Have That Man” and “Cheatin’ on Me” are alone worth the price of admission.

4. Whatever Julie Wants (1961). One of London’s best, built primarily around gold-digger anthems, though most of the tracks are included on the still-available compilation Best of the Liberty Years. This is the album that contains London’s second recording of Troup’s “Daddy,” with significant lyric changes from the version included on 1958’s Julie. On Capitol’s Wild, Cool & Swingin’ Ultra-Lounge compilation both versions are presented side-by-side.

5. Latin In a Satin Mood (1963). In the early ’60s it was practically de rigueur for every jazz-oriented vocalist to record a Latin album. London’s entry includes both the expected – “Frenesi,” “Vaya Con Dios,” “Besame Mucho,” “Sway” – and such delightful additions as “Come Closer to Me” and “Magic In the Moonlight.”

6. Julie London (1964). The most confusing album in the London catalog since it is commonly misnamed You Don’t Have to Be a Baby to Cry (which is how it is listed on the CD Japan site). Comprised primarily of covers of pop hits of the day, it is the album that includes her first treatment of “Wives and Lovers” and her covers of “That Sunday, That Summer” and “All About Ronnie,” neither of which have ever surfaced on compilations.

7. Our Fair Lady (1965). Again, though never previously released on CD in its entirety, many of the tracks have surfaced on compilations. It includes her second take on “Wives and Lovers” plus her otherworldly cover of the title song from the Alan Ladd/Sophia Loren film Boy On a Dolphin and another movie anthem, “An Affair to Remember,” which hasn’t appeared on any London collection.

8. With Body & Soul (1967). Unquestionably the most unusual and rarest London release, it includes such unexpected R&B covers as “The Comeback,” “C.C. Rider,” offset by a dreamy rendition of “Alexander’s Ragtime Band.”

9. Easy Does It (1968). London’s penultimate album is one of her loveliest, and few of the tracks have appeared on compilation CDs. Among the highlights are her mellow readings of “Spring Will Be a Little Late This Year” and “Soon It’s Going to Rain.”

There is an additional London album, the only one not included among the 30 Japanese re-releases. From 1965, it is entitled By Myself and was produced exclusively for the Columbia Record Club. All ten of the tracks are, however, culled from other London albums.

Of course, one of the benefits of the 30 new releases is their replication of the original cover art. As anyone familiar with the LPs knows, London cover art almost invariably looked liked Hugh Hefner had overseen the design. Topping the list are the eye-popping Julie, featuring a seemingly naked London reclining in a wire mesh chair and Whatever Julie Wants with her sporting nothing but a mink stole.

The last word goes to London, who fully appreciated her vocal limitations and her ability to make the most of them. In a 1957 cover story for Life, she sagely observed, “It’s a thimbleful of a voice, and I have to use it close to the microphone. But it is a kind of over-smoked voice, and it automatically sounds intimate.” Amen.

Organ trios and quartets were ubiquitous by the mid-1960s. In African American neighborhood bars and clubs up and down the East Coast, throughout the Rust … END_OF_DOCUMENT_TOKEN_TO_BE_REPLACED

Terence Blanchard looked around the restaurant table and launched into a gentle sermon about jazz education in Detroit that was part homily, part pep talk, … END_OF_DOCUMENT_TOKEN_TO_BE_REPLACED

Creating a program of solo piano music is the ultimate challenge for any improvising pianist. The music on my latest album, Ways of Disappearing (Sunnyside), … END_OF_DOCUMENT_TOKEN_TO_BE_REPLACED

First the good news: As you can see in our annual Festival Guide, there are plenty of jazz festivals scheduled to happen around the world … END_OF_DOCUMENT_TOKEN_TO_BE_REPLACED