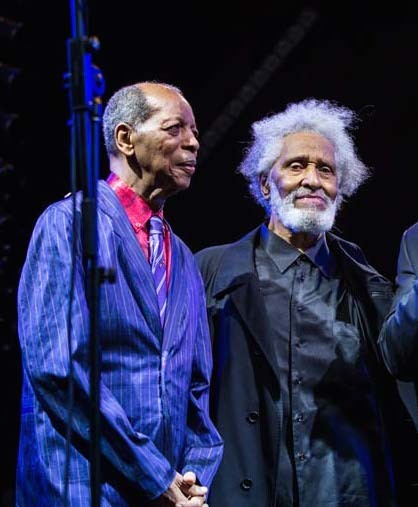 This column can really come in handy when I have so many-too many-features and reviews vying for coverage in our limited space. I just couldn’t, for instance, let this book go to print without telling you about “Celebrate Ornette,” an admission-free tribute concert for Ornette Coleman that took place during a cloudy and eventually rainy evening in mid-June at Brooklyn’s Prospect Park.

To put it tritely but accurately, this was one for the ages. If you were there, be kind to those who weren’t: I mean, it has to sting when they hear about the man himself blowing alongside David Murray and Henry Threadgill-and there was so much more at this three-hours-plus lovefest. A top-tier European festival would be epic if it managed to fill a week with all the talent heard on this single evening.

Drummer and organizer Denardo Coleman, Ornette’s son, whose Vibe proved a flexible house band, didn’t waste time in his programming. The big question leading up to this night was whether or not Ornette would be there-he wasn’t advertised, and hasn’t spent a lot of time onstage of late. But within minutes the concert’s namesake and Sonny Rollins were sharing an embrace, both sans horn but in saintly spirits and talking with palpable gratitude. Before your head fills with memories of the Beacon Theatre in 2010, Rollins didn’t play. Ornette did, though, at satisfying if shaky length, continually stretching from the middle register toward his keening, blues-drenched mother’s wail.

Ornette’s influence is vast and general and philosophical, so of course a pack of admirers from the rock and avant-garde (and avant-rock) scenes were on hand, including Patti Smith; Red Hot Chili Peppers bassist Flea, who came off like a ringer; and some world-class sonic provocateurs, including the “quartet” of John Zorn, Laurie Anderson, Bill Laswell and an installation of infamously noisy amps and guitars owned by the late Lou Reed. But what I found most enthralling were the moments that made clear how essentially Ornette has informed hard-jazz tradition and language-for example, Joe Lovano charging through “The Sphinx,” Ravi Coltrane unraveling “Lonely Woman” in an all-cast closer and Branford Marsalis jubilating through “Theme From a Symphony.”

Absent at this tribute was the brilliant Charlie Haden, an alum of Ornette’s history-altering quartet, who died as this issue was being put to bed. Haden’s bass playing, straight and true and effortlessly lyrical, would have been a highlight among the highlights, no doubt. It always was.

Organ trios and quartets were ubiquitous by the mid-1960s. In African American neighborhood bars and clubs up and down the East Coast, throughout the Rust … END_OF_DOCUMENT_TOKEN_TO_BE_REPLACED

Terence Blanchard looked around the restaurant table and launched into a gentle sermon about jazz education in Detroit that was part homily, part pep talk, … END_OF_DOCUMENT_TOKEN_TO_BE_REPLACED

Creating a program of solo piano music is the ultimate challenge for any improvising pianist. The music on my latest album, Ways of Disappearing (Sunnyside), … END_OF_DOCUMENT_TOKEN_TO_BE_REPLACED

First the good news: As you can see in our annual Festival Guide, there are plenty of jazz festivals scheduled to happen around the world … END_OF_DOCUMENT_TOKEN_TO_BE_REPLACED