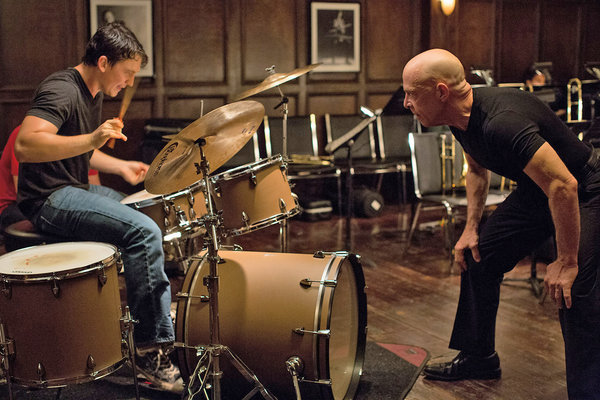 I’m embarrassed to admit it, but the most thrilling jazz-related moments I experienced in the past month didn’t have to do with the music covered in this vocal-themed issue. And they weren’t connected to any of the terrific live performances I took in-not even Herbie Hancock’s reunited Mwandishi band at the Apollo, or when Mwandishi multireedist Bennie Maupin stayed onstage with Hancock to awaken the Headhunters on “Chameleon.” No, what really affected me was Whiplash, the recent film, written and directed by Damien Chazelle, starring Miles Teller as an aspiring jazz drummer enrolled at a prestigious Manhattan music school and J.K. Simmons as his band director, a violent, unknowable man who could safely be called a sociopath.

Film scribes have mostly had very positive things to say about Whiplash, but jazz heads on the Internet have been far less kind, writing think pieces if they’re employed as journalists and griping on Facebook if they’re not. That’s a real shame, since so many jazz fans are also film buffs and Whiplash is a dynamite movie. Yes, the bandleader’s bloodthirsty tactics are so heinous they’re laughable, unless you accept them as necessary fictions in a psychodrama. And some of the dialogue has that canned quality that is a common pitfall when digging into subcultural details in a screenplay.

But Whiplash is also a deeply accurate portrayal of jazz education on a philosophical level, especially as it relates to the dreams, delusions and anxieties of the young men and women immersed in it. More than jazz, it’s a movie about adolescent notions-of greatness, of sacrifice, of what constitutes value in life-and how severely adults can guide those ideas. The most frightening aspect of Simmons’ character isn’t his chair-throwing or homophobia: It’s that his students take what he says to heart. Our formative drummer doesn’t understand how musical personality is more important than precision and virtuosity because God doesn’t seem to think that. As for those aforementioned anxieties, make no mistake: Jazz education is dripping with distress. Go to a state band audition and see how much fun everyone is having; to recast Sartre-hell is soloing over play-along tracks in front of clipboard-toting clinicians.

So, please, check out Whiplash and let me know what you think at [email protected] And one more thing, to respond to one jazz-loving film critic who writes for that famous magazine in New York City: A drummer starting college nowadays would absolutely still be obsessed with Buddy Rich, a jazz version of a sports hero if there ever was one.

Organ trios and quartets were ubiquitous by the mid-1960s. In African American neighborhood bars and clubs up and down the East Coast, throughout the Rust … END_OF_DOCUMENT_TOKEN_TO_BE_REPLACED

Terence Blanchard looked around the restaurant table and launched into a gentle sermon about jazz education in Detroit that was part homily, part pep talk, … END_OF_DOCUMENT_TOKEN_TO_BE_REPLACED

Creating a program of solo piano music is the ultimate challenge for any improvising pianist. The music on my latest album, Ways of Disappearing (Sunnyside), … END_OF_DOCUMENT_TOKEN_TO_BE_REPLACED

First the good news: As you can see in our annual Festival Guide, there are plenty of jazz festivals scheduled to happen around the world … END_OF_DOCUMENT_TOKEN_TO_BE_REPLACED