Skip to content
Become a member and get exclusive access to articles, live sessions and more!
Start Your Free Trial
Home > Features > Jon Regen: From Piano to the Voice 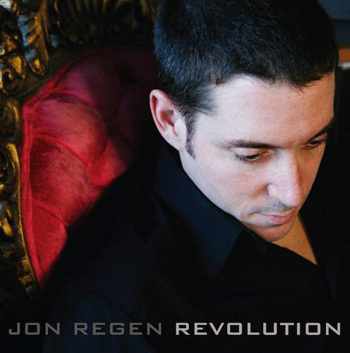 More than a few jazz pianists have scored equal, if not greater, success as vocalists, Nat “King” Cole and Diana Krall the most obvious examples. Jon Regen has followed the same route, but taken a slightly different tack, building a solid jazz career as accompanist and leader then taking a rather sharp left turn to reestablish himself as a first-rate pop-jazz singer/songwriter.

Regen, a native New Jerseyite, actually started out playing sax, but switched to piano in his late teens. Mentored by Kenny Barron at Rutgers University, he was named runner-up in the 1996 Great American Piano Jazz Competition. That same year, he released his debut album, From Left to Right. His Live at the Blue Note followed in 2000, featuring Ray Drummond and Joel Frahm and built almost entirely of original Regen compositions. His even more ambitious Tel Aviv, released in 2001, offered up a wider array of covers – including masterful interpretations of Herbie Hancock’s “Just Enough” and Barron’s “Only One” – and Regen’s brilliantly crafted, three-part, 22-minute “Tel Aviv Suite.” He also earned plaudits for his touring work in support of bassist Kyle Eastwood and vocal legend Jimmy Scott.

Then, in 2004, with the release of the seven-track EP Almost Home, came Regen’s unexpected reinvention. His vocal style drew comparisons to fellow jazz-pop hybrid Bruce Hornsby; his songwriting suggested the storytelling élan of Randy Newman. His first full-length vocal album, 2008’s self-produced (and largely self-distributed) Let It Go confirmed the EP’s promise. Guitarist Andy Summers made two guest appearances, on the hard-drivingly romantic “Close to Me” and the distinctly Police-esque, self-actualizing anthem “Finding My Way Back to Me.” But the album’s standout track was “Better Days,” a terrific, bottom-of-the-beer-glass barroom lament brightened by a tinge of dawning optimism.

Now, with Revolution, he delivers his most accomplished album to date. Co-produced by Regen and multi-instrumentalist Matt Rollings (who alternates among accordion, Hammond B3, mellotron and glockenspiel on four selections), its 10 tracks are uniform testament to Regen’s richly fulfilling maturation as both singer and songwriter (who also remains a top-drawer pianist). Vocally, he has settled into an enticing John Mayer-meets-Curtis Stigers groove. As a writer (and co-writer, since Revolution finds Regen exploring far more partnerships than ever before, including winning alliances with Matchbox Twenty’s Rob Thomas and British soul man David McAlmont), his abilities extend from the yarn-spinning élan of Harry Chapin to the sly wit of Dave Tull or Mark Winkler.

The playful Regen serves up “She’s Not You (But Tonight She’ll Have To Do),” a fresh take on the sexual indiscrimination of Stephen Stills’ “Love the One Your With,” and “Delores,” a delightful, and surprisingly tender, tale of the search for amour among love’s castoffs, its gentle punch driven home by Benmont Tench, of Tom Petty and the Heartbreakers fame, on B3.

Romance, in various forms and at various stages, remains the theme for most of the remaining tracks. There’s the quixotic pursuit that propels “Run Away,” its Motown-era Marvin Gaye shades enhanced by McAlmont as vocal duettist, and the sweet perplexity of “Just Waiting for Now.” The power-pop “Fighting for Your Love” was, says Regen, inspired by Elton John’s “Saturday Night’s Alright for Fighting,” but more closely resembles Billy Joel circa “It’s Still Rock ‘n’ Roll,” set to a Huey Lewis backbeat; and the balladic side of Joel is evident throughout the bruised “One Part Broken, Two Parts Blue.” The heartbreak continues through the bewildered dejection of the title track and the aching scorn of “Excuse Me, But It’s Not Supposed to End Like This.” The deep satisfaction and redemption at the heart of “If You’re Not Here” provides a brief respite from all the yearning and heartache. Summers returns for “Spirits of the Soul,” superlative among these ten excellent pieces, its haunted deconstruction of a vanquished relationship as potent as anything crafted by the guitarist’s Police-mate, Sting.

Revolution is currently available on Amazon, CD Baby and iTunes, as are Almost Home and Let It Go.

Organ trios and quartets were ubiquitous by the mid-1960s. In African American neighborhood bars and clubs up and down the East Coast, throughout the Rust … END_OF_DOCUMENT_TOKEN_TO_BE_REPLACED

Terence Blanchard looked around the restaurant table and launched into a gentle sermon about jazz education in Detroit that was part homily, part pep talk, … END_OF_DOCUMENT_TOKEN_TO_BE_REPLACED

Creating a program of solo piano music is the ultimate challenge for any improvising pianist. The music on my latest album, Ways of Disappearing (Sunnyside), … END_OF_DOCUMENT_TOKEN_TO_BE_REPLACED

First the good news: As you can see in our annual Festival Guide, there are plenty of jazz festivals scheduled to happen around the world … END_OF_DOCUMENT_TOKEN_TO_BE_REPLACED