Skip to content
Become a member and get exclusive access to articles, live sessions and more!
Start Your Free Trial
Home > Features > Joanie Sommers: Her Generation 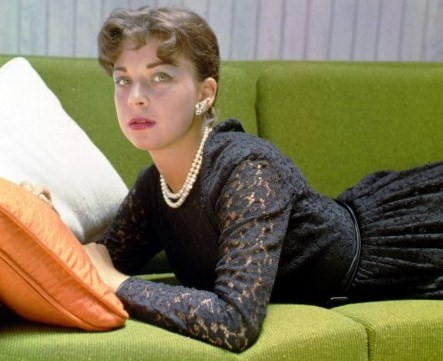 The voice of American youth and vigor is soon to turn 70. Joanie Sommers, who encouraged millions of teenaged baby boomers to “come alive” and take their rightful place within the “Pepsi generation” back in the early 1960s, will enter her eight decade next February. So, it seems high time that Sommers get her due, and for far more than shilling soda.

Back in the day, Sommers had everything going for her: a terrific voice (if you’ve never heard Sommers sing, she sounds uncannily similar to Stacey Kent), a major label (the freshly-minted Warner Brothers Records) backing her, strong TV promotion with guest spots on all the popular variety shows, bookings at topflight night clubs stretching from New York to Vegas and, of course, near-ubiquitous exposure thanks to Pepsi. In the studio, such fine players and arrangers as Neil Hefti, Marty Paich, Shelly Manne, Buddy Collette, Russ Freeman, Bobby Troup, Conte Candoli, Al Caiola, Bucky Pizzarelli and Laurindo Almeida supported her.

So, with so many oars simultaneously pulling in the right direction, why didn’t Sommers star rise higher? Three reasons: She was the victim of bad timing and murky marketing, and fell prey to the ironic curse of a single, iconic hit.

Sommers was born in Buffalo, where her pre-teen rendition of “You’re Cheatin’ Heart” earned her a prize on a local TV station. She relocated with her family to California at age 14, and was often the student singer at Venice High School sock hops. At 18, she was discovered by Tommy Oliver (who would contribute arrangements to two of her early albums), was signed to Warner and cast for a guest appearance on the studio’s breakout TV hit 77 Sunset Strip, co-starring Edd Byrnes as slang-slinging beatnik Kookie. Sommers recorded two utterly forgettable duets with Byrnes, released as singles after his pairing with Connie Stevens on a bit of absurd teen abstraction called “Kookie, Kookie (Lend Me Your Comb)” became a surprise million-seller. Neither caused a dent on the charts.

Then, in 1959, Warner execs decided to take a different tack with Sommers. Paich and Oliver were hired to shape an album of standards. The title, Positively the Most! was chosen because “most” rhymed with “Drost” (Sommers’ real name), but the switch to the far more rhythmic “Sommers” occurred before the album’s release. Sommers, still just 18, rose to the occasion with remarkably mature, pop-jazz renditions of both swingers and ballads. Particularly impressive were her dew-soft “Heart and Soul” and a nicely percolated “Too Young for the Blues.” Indeed, the album included only one serious misstep, an unduly histrionic “What’s New.”

Warner continued in the same vein for Sommers’ 1961 follow-up, The Voice of the Sixties. Neil Hefti’s arrangements proved ideally suited to Sommers youthful panache, though it is the most modulated of the album’s twelve tracks, a slow, smoldering “Cherokee,” that proves most enticing. The album also provides the earliest hint of Warner’s desire to hedge their bets by cross-promoting Sommers as a teen sensation in the mold of Connie Francis or Brenda Lee. The track is Rodgers and Hart’s “This Can’t Be Love,” fit to a pop-rock arrangements that surely had the notoriously persnickety Rodgers fuming.

Trading on Sommers’ growing recognition as Pepsi’s peppy spokesgirl, they brought Paich back to fill the first half of 1962’s For Those Who Think Young. Paich arranged six tunes, with the teenage-appropriate “A Lot of Livin’ To Do” from Bye Bye Birdie and a slightly unhinged “Hey, Jealous Lover” served up alongside “Round Midnight” and “Blues In the Night.” The album’s second half, recorded live on campus at Cal State Northridge in the San Fernando Valley and arranged by the more circumspect Bob Florence, returned Sommers to a safe, temperate standards zone, with lovely if tepid treatments of “I Feel A Song Comin’ On,” “I Feel Pretty” and such.

By this point, Warner’s A&R department must surely have recognized that even the biggest names in jazz vocals – Fitzgerald, Vaughan, Clooney, Tormé – were fighting a losing battle for airplay and record sales against the likes of Francis, Neil Sedaka and the myriad Bobbys (Vee, Vinton, Darin, et al.) So the decision was made to re-fit Sommers as an angst-ridden teen queen. She hit paydirt with a spirited ode to high school heartache, the infectiously bouncy “Johnny Get Angry.” The song zoomed to number seven on Billboard and Warner quickly cobbled together an oddly schizophrenic album that interspersed such sugary dross as “Since Randy Moved Away” and “Shake Hands With a Fool” with polished readings of “A Nightingale Sang In Berkley Square” and “I Don’t Want to Walk Without You.”

When none of Sommers’ additional slices of adolescent heartbreak lived up to the promise of “Johnny Get Angry,” it was back to square one. Oliver returned to shape the concept album Let’s Talk About Love, featuring superb renditions of, among others, “Make the Man Love Me” and “Till There Was You.” Sommers, now 21, had grown into a first-rate standards-bearer; yet would forever be tarred as the ponytailed lass desperate for boyfriend Johnny to flex some muscle.

Another concept album, the ’round-the-calendar venture Sommers’ Seasons followed in 1963. Again Sommers demonstrated marvelous dexterity across a twelve-tune playlist that extended from the barren chill of “Early Autumn” to the playful effervescence of “Spring, Spring, Spring.”

As is so often the ironic case, Sommers delivered her finest album (then or since) just as Warner decided to drop her from their roster. Softly, the Brazilian Sound, conceived and conducted by Laurindo Almeida, ranks among the loveliest, most accomplished Latin albums of the day. “Quiet Nights of Quiet Stars,” “Meditation,” “I’ll Remember April,” “Softly, As I Leave You” and “That’s All” are all delivered with exquisite tenderness.

After cutting ties with Warner, Sommers recorded a few singles (including an excellent, if vastly underappreciated, “Alfie”) and one album, the ultra-rare Come Alive! featuring great renditions of “The Shadow of Your Smile” and “Girl Talk,” for Columbia. By 1970, she had removed herself entirely from the music scene, focusing instead on raising her kids. The 1980s saw a brief Sommers resurgence, both as Pepsi booster (this time promoting Diet Pepsi) and as jazz stylist. Two indie albums, Dream and Tangerine revealed that Sommers’ voice had lost none of its warm, slightly hazy appeal, but few were paying attention. 1992’s A Fine Romance, a lovely collection of Jerome Kern tunes, gained a tad more notice, and remains relatively easy to find on CD.

Another decade passed before Sommers’ returned with Here, There and Everywhere and the estimable Sings Bossa Nova, a disc so rare that on the odd occasion a CD copy surfaces on auction sites, the price invariably soars to triple digits.

Sommers continues to perform to this day, and still sounds terrific. Her Warner albums are all available on CD (via a series of Collectors Choice reissues that have remained steadily in print) and on iTunes. She had her blazing moment in the sun, thanks to one iconic hit (and one iconic soft drink), and revealed a vocal deftness that kept her in the public eye for more than half a century. Still, it’s tempting to ponder how much bigger and brighter her career might have been, and how richer vocal fans’ record collections might be, if she’d arrived a decade earlier, or a couple of decades later. She certainly could, and should, have been at least as popular, and as widely respected, as Kent currently is.

If you’ve never taken the time to fully appreciate Sommers, do yourself a favor: buy or download those early albums, all reissued by Collectors Choice and all but one, For Those Who Think Young, still in print. Also check out Look Out! It’s Joanie Sommers, a 20-track collection of tunes, widely available on CD, recorded with Manne’s quintet and Troup’s sextet in 1962 and ’63 for a 15-minute radio program called The Navy Swings. If you have the patience and financial resources, search for the later material too. Wherever you start, you’re in for a delightful treat.

If you’d like to share your comments about Joanie Sommers or have suggestions for future installments of Hearing Voices, please direct your email to [email protected]

Organ trios and quartets were ubiquitous by the mid-1960s. In African American neighborhood bars and clubs up and down the East Coast, throughout the Rust … END_OF_DOCUMENT_TOKEN_TO_BE_REPLACED

Terence Blanchard looked around the restaurant table and launched into a gentle sermon about jazz education in Detroit that was part homily, part pep talk, … END_OF_DOCUMENT_TOKEN_TO_BE_REPLACED

Creating a program of solo piano music is the ultimate challenge for any improvising pianist. The music on my latest album, Ways of Disappearing (Sunnyside), … END_OF_DOCUMENT_TOKEN_TO_BE_REPLACED

First the good news: As you can see in our annual Festival Guide, there are plenty of jazz festivals scheduled to happen around the world … END_OF_DOCUMENT_TOKEN_TO_BE_REPLACED