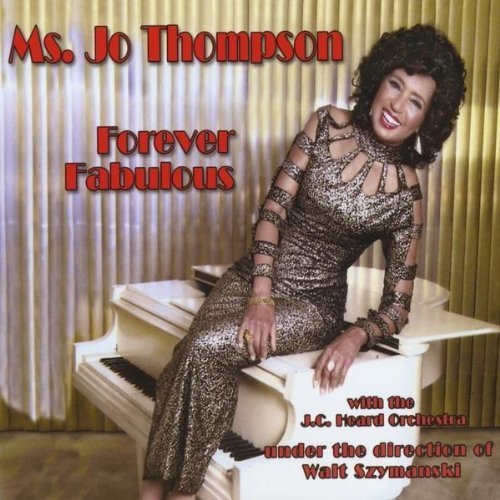 Around the time Jo Stafford was reaching the peak of her solo popularity in the 1950s, another Jo arrived on the music scene. Jo Thompson got her start in Miami, earning a strong following among the local cognoscenti and establishing herself as a top-drawer cabaret performer. Though her hero was Lena Horne, Thompson’s brand of nightclub fare more closely mirrored the playful sophistication of Julie Wilson. Thompson soon moved beyond Miami, proving as strong a crowd pleaser in posh nightspots extending from Hollywood to New York, London and Paris. But, come the 1960s, Thompson opted for a life out of the spotlight. She married a Chrysler executive, moved to Detroit and raised three sons. It wasn’t until the 1990s that Lionel Hampton, who praised Thompson as both “a class act” and “one of the last great pianist-singers,” finally coaxed her out of retirement.

Unlike Wilson, whose onstage antics, sparkling repartee and mischievously kittenish style were captured on several early-career albums (and an even wider assortment in the 1980s, ’90s and into the new millennium), none of Thompson’s pre-retirement work was ever officially recorded. Indeed, it wasn’t until 2001 that she made her recording debut, at age 74. The cover art for Slender, Tender and Tall showed a youthful Thompson seated at a baby grand, sporting a sly smile that seemed to simultaneously promise fun and naughtiness. Flashy, brassy and just the slightest bit trashy, the album’s eleven tracks proved that Thompson had not lost an ounce what that other uninhibited Thompson, the vibrant Kay, liked to call “bazazz!

Now into her eighties, Thompson is back with a sophomore disc that, currently a contender for Grammy consideration, is aptly titled Forever Fabulous. Across 15 tracks backed by the J.C. Heard Orchestra under the direction of Walt Szymanski, Thompson leaves no tempo untested or mood unexplored. The voice has lost a bit of its luster, though remarkably little for an octogenarian, but her bravura remains indefatigable. Thompson opens with a sizzling “Bye Bye Blackbird,” segues into a surprisingly mellow “Gee Baby Ain’t I Good to You,” and then revs back up to full throttle to traverse “On the Sunny Side of the Street” at near-march pace. A warm and willing “Embraceable You” is cleverly ushered in on crashing waves of “Rhapsody of Blue” and “Just a Gigolo,” so rarely covered by female vocalists, is delivered with Louis Prima showiness. Speaking of larger-than-life showmen, Thompson makes a noble, if not entirely successful, effort to replicate Louis Armstrong’s gravel-paved growl on “Hello, Dolly.” Far better is her rollicking Waller medley of “Ain’t Misbehavin'” and “Your Feet’s Too Big.” At the album’s midpoint, Thompson takes a four-minute break while Szymanski leads the orchestra through a spirited big band swinger called “Jumpin’ With Jo.” She returns for a red-hot, Sophie Tucker-ish romp through “Nobody Knows You When You’re Down and Out,” then keeps the fire burning for a pulsating blend of “Don’t Get Around Much Anymore” and “Satin Doll.” As the album spins to a close, Thompson effectively explores the gentle pathos of “Try A Little Tenderness,” and gleefully captures the zip of both “Exactly Like You” and “Them There Eyes.” But it is her approach to “Since I Fell for You,” the woeful heartbreaker transformed into a pounding gospel number, that proves most arresting. Appropriately, Thompson closes with Lieber and Stoller’s “I’m A Woman,” taking the Peggy Lee/Raquel Welch anthem to fresh heights of self-reliant feistiness.

If you’d like to share your comments about Jo Thompson, or have suggestions for future installments of Hearing Voices, please direct your email to [email protected]

Organ trios and quartets were ubiquitous by the mid-1960s. In African American neighborhood bars and clubs up and down the East Coast, throughout the Rust … END_OF_DOCUMENT_TOKEN_TO_BE_REPLACED

Terence Blanchard looked around the restaurant table and launched into a gentle sermon about jazz education in Detroit that was part homily, part pep talk, … END_OF_DOCUMENT_TOKEN_TO_BE_REPLACED

Creating a program of solo piano music is the ultimate challenge for any improvising pianist. The music on my latest album, Ways of Disappearing (Sunnyside), … END_OF_DOCUMENT_TOKEN_TO_BE_REPLACED

First the good news: As you can see in our annual Festival Guide, there are plenty of jazz festivals scheduled to happen around the world … END_OF_DOCUMENT_TOKEN_TO_BE_REPLACED