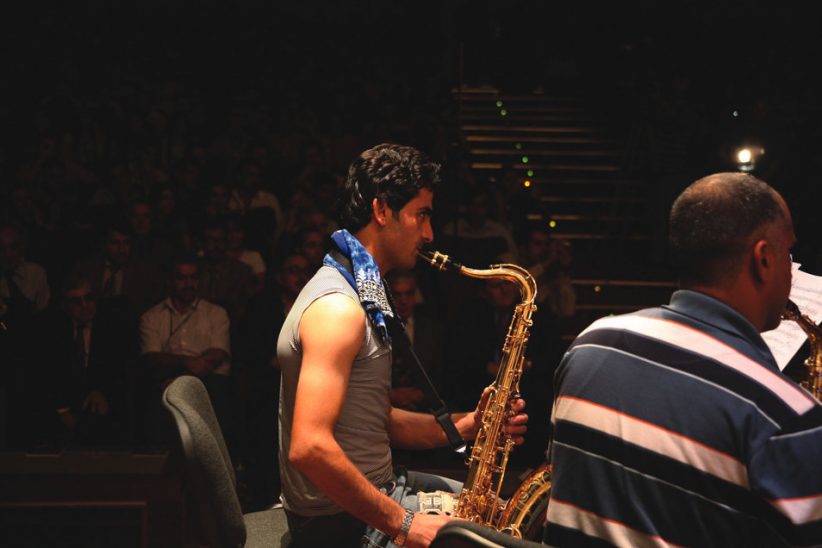 A jazz musician in Iraq

Hard to believe, but Iraq was once seen as “an island in a sea of instability.” In Satchmo Blows Up the World: Jazz Ambassadors Play the Cold War, Penny M. Von Eschen discusses how Iraq changed, and how American jazz musicians practically witnessed it. Dave Brubeck played Baghdad in 1958, just weeks before Abd al-Karim Qassim deposed King Faysal II. In 1963, mere months after Duke Ellington came through town, Ahmad Hassan al-Bakr, the mentor of Saddam Hussein, toppled Qassim’s government. The rest is history, one might say. But the tale of American and Iraqi cultural exchange continues, under vastly different circumstances.

This summer, in the northern city of Erbil, the Houston-based nonprofit American Voices launched the Unity Performing Arts Academy in Iraq. Its inaugural run began on July 14, oddly, the 49th anniversary of Qassim’s coup. With support from the U.S. Embassy and the Iraqi Ministry of Culture, the academy flew in American and European faculty to provide 10 days of free instruction in jazz and classical music, dance (including ballet and hip-hop) and theater. The program attracted over 300 students: Arabs from Baghdad as well as Kurds from Erbil, Suleimaniya and other districts in what is known as Iraqi Kurdistan.

One goal was “to provide an oasis of calm” in a war-torn region, although Iraqi Kurdistan is comparatively calm as it is. In the words of a Kurdistan Regional Government branding campaign, this is “The Other Iraq,” free of the carnage and lawlessness plaguing the other provinces. And yet it is no paradise. The area has seen violent anti-corruption protests, acute fuel shortages, border tensions with Turkey and Iran, even the occasional car bomb. Look south, however, and it’s clear that things could be worse. To a remarkable degree, Kurdistan has recovered from Saddam’s genocidal Anfal campaign of the late ’80s. But while most Kurds welcomed their tormenter’s downfall, their hard-won gains may wind up threatened by the current war and its aftermath.

No one expects music instruction to resolve the crisis. But in these situations, nourishing the arts and culture is hardly unimportant. If American Voices has fostered a bit of amity between Iraqis and Westerners, Arabs and Kurds, Shiites and Sunnis, Muslims and Christians, it has accomplished much.

Since its inception in 1993, American Voices has offered programming throughout Eastern Europe, the Middle East and Central and Southeast Asia. “We try to introduce American culture to parts of the world isolated by ideology, geography or conflict,” says executive director John Ferguson, a classical pianist.

While jazz makes up roughly 25 percent of a typical program, it can spark some of the most substantive interactions. “People who have close contact with traditional music take to jazz very easily,” Ferguson notes. “That’s been our experience in Azerbaijan, Kazakhstan and western China. The Kurds, too, come from a folk tradition that is improvised and very spontaneous.”

There were two jazz instructors in Erbil. Dr. Gene Aitken, recently inducted into DownBeat’s Jazz Education Hall of Fame, taught for over a quarter-century in Colorado and is now based in Singapore and Bangkok. Germany’s Werner Englert has run American Voices clinics for the last five years in Taiwan, Kyrgyzstan and elsewhere. The two had never worked together before. They landed in Iraq with donated instruments, several complete sets of Jamey Aebersold Play-A-Longs and a readiness to improvise not just the music, but the pedagogy as well.

“It was absolutely the experience of a lifetime,” Aitken exclaims. There were roughly 50 jazz students, ranging from 15 to 50 years of age. “They had barely any previous exposure to jazz,” Aitken says, “but they had quite a thirst for information, and the progress from day one to the end was tremendous. I’ve never encountered anything as meaningful.” One class was a big band with percussion, guitars, woodwinds and even a lute-like saz. Aitken adds, “We were able to take standard arrangements and make them work pretty well.” In a brief ABC News clip about the academy, one could hear the group riffing on “Cantaloupe Island.”

After the long days of classes and workshops, there was a gala performance by a “Unity Orchestra” that combined personnel from different cities around the region. This had never happened before in Iraq. Audio problems didn’t diminish the event’s significance. “At the end,” recalls Englert, “there was a lot of celebration and tears, deep emotions on all sides.”

American Voices left the students with plenty of Aebersolds and other materials, hoping to encourage further study. “There is talk of forming a jazz NGO [non-governmental organization] in Suleimaniya to continue the work there,” Ferguson says, “and we will keep working toward follow-up visits in Erbil.”

Much like the Cold War jazz tours, the American Voices initiative is open to all manner of political interpretation. The White House, eager to promote “good news” out of Iraq, may spin it as a vindication of current policy. Others may dismiss “cultural diplomacy” as part of the apparatus of occupation. Islamist militias, who view all music as a sin, hardly need to be polled on their view of American jazz and dance. Caught in the middle are everyday Iraqis, trying to better their lives. American Voices is standing by them. As jazz enthusiasts and fellow citizens, we owe this organization thanks.

Organ trios and quartets were ubiquitous by the mid-1960s. In African American neighborhood bars and clubs up and down the East Coast, throughout the Rust … END_OF_DOCUMENT_TOKEN_TO_BE_REPLACED

Terence Blanchard looked around the restaurant table and launched into a gentle sermon about jazz education in Detroit that was part homily, part pep talk, … END_OF_DOCUMENT_TOKEN_TO_BE_REPLACED

Creating a program of solo piano music is the ultimate challenge for any improvising pianist. The music on my latest album, Ways of Disappearing (Sunnyside), … END_OF_DOCUMENT_TOKEN_TO_BE_REPLACED

First the good news: As you can see in our annual Festival Guide, there are plenty of jazz festivals scheduled to happen around the world … END_OF_DOCUMENT_TOKEN_TO_BE_REPLACED