Skip to content
Become a member and get exclusive access to articles, live sessions and more!
Start Your Free Trial
Home > Features > Solo: Jazz and Basketball 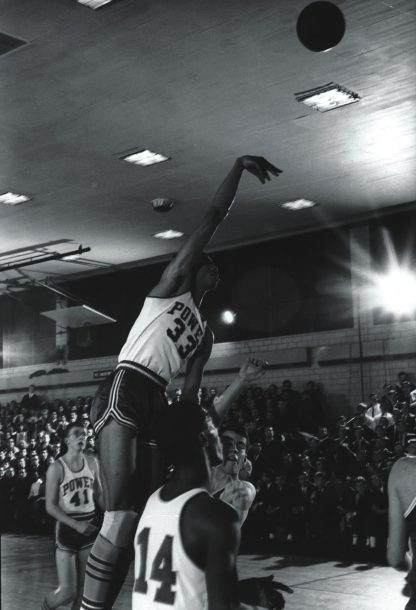 Excerpted from On The Shoulders of Giants by Kareem Abdul-Jabbar 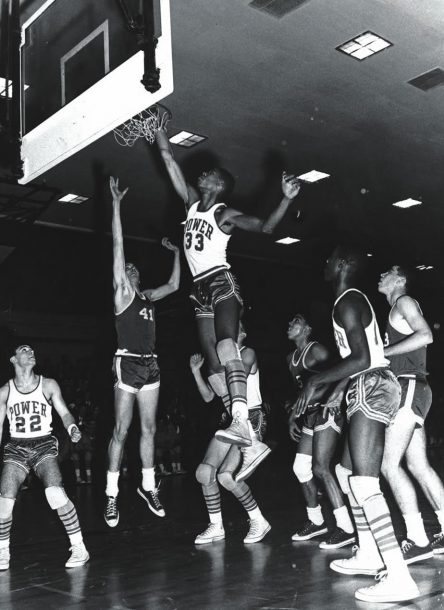 Excerpted from On The Shoulders of Giants by Kareem Abdul-Jabbar

There can be no doubt that jazz has made me a better person than I would have been without it. The music inspires my passion to participate fully and richly in life. And the jazz greats I’ve known, from Miles Davis to John Coltrane to Louis Armstrong to my dad, have inspired me to be disciplined, ambitious, caring and dedicated to my community.

But jazz has also made me a better basketball player.

Now, if that statement motivates a bunch of young basketball hopefuls to rush to their computers and download classic jazz tracks onto their iPods, then I’m pleased. Because the values I learned from jazz to apply to basketball are values that apply off the court as well.

Many people unfamiliar with jazz think the music is all about the solo riffs. A single player suddenly jumping to the front of the stage, the spotlight shining brightly on him, while he plays whatever jumble of notes that pop into his head. But really, jazz is just the opposite. True, there are magnificent solos, but those moments aren’t the point of jazz, they are all part of the larger musical piece. Each person is playing as part of the team of musicians; they listen to each other and respond accordingly. When the time is right, one player will be featured, then another, and so on, depending upon the piece. Indeed there is improvisation, but always within a musical structure of a common goal.

Same with basketball. When you play basketball, everything is timing, just as with a song. You must be able to instantly react to the choices your teammates make. You must be able to coordinate your actions with your teammates’ and you must understand when you need to take over the action-when to solo-and when to back off. The timing of group activity is a major part of basketball, as it is with jazz. A team of basketball soloists, without the structure of a common goal, may get TV endorsements for pimple cream, but it doesn’t win championships.

Many athletes listen to music while they train, whether it’s jogging, lifting weights or just stretching. The type of music depends upon what motivates that individual. For me, jazz not only motivated me, but also helped me perfect my footwork on the court. Unlike some other types of music, jazz has a unique combination of being explosive yet controlled, measured yet unpredictable. The exact virtues necessary for effective footwork while in high school. Before every Saturday practice, I would listen to Sonny Rollins for a little motivation. Then I’d hit the gym floor with his music in my head and in my feet.

Jazz has also provided a valued source of camaraderie with other players. During my career with the NBA, some of the loneliness of those long road trips was eased by sharing my love of jazz with other players that were jazz enthusiasts, including Walt Hazzard, Spencer Haywood and Wayman Tisdale. Wayman was also a bass player and released a few records himself. Most of the other guys also enjoyed pop, rhythm ‘n’ blues and reggae, but I stayed pretty faithful to jazz, listening to other genres only if jazz wasn’t available.

In the large scope of things, that Kareem Abdul-Jabbar likes jazz is pretty insignificant. But what isn’t insignificant is the impact jazz has had on African-American history as well as American history. The men and women who created and refined the jazz sound during the Harlem Renaissance had America dancing and moving to a sound it had never heard before. And they had white Americans appreciating black artists as they never had before.

Certainly we are not obligated to listen to jazz just because it has historical significance. All the jazz greats from the Harlem Renaissance such as Duke Ellington, Count Basie and Louis Armstrong would be horrified if they saw children being spoon-fed jazz as if it were some bitter-but-good-for-you medicine. I feel the same way. I hope that through your exposure to the history of jazz and through my history with jazz, you’ll be curious enough to play a few tunes by the artists discussed. But if you don’t, jazz will endure. Because, in the end, jazz isn’t about musical theory or historical significance or even personal memories.

It’s about wanting to get up out of your chair and move your body just because you’re alive and the world is fat with possibilities-and because it just feels so good to swing. Originally Published March 1, 2007

Organ trios and quartets were ubiquitous by the mid-1960s. In African American neighborhood bars and clubs up and down the East Coast, throughout the Rust … END_OF_DOCUMENT_TOKEN_TO_BE_REPLACED

Terence Blanchard looked around the restaurant table and launched into a gentle sermon about jazz education in Detroit that was part homily, part pep talk, … END_OF_DOCUMENT_TOKEN_TO_BE_REPLACED

Creating a program of solo piano music is the ultimate challenge for any improvising pianist. The music on my latest album, Ways of Disappearing (Sunnyside), … END_OF_DOCUMENT_TOKEN_TO_BE_REPLACED

First the good news: As you can see in our annual Festival Guide, there are plenty of jazz festivals scheduled to happen around the world … END_OF_DOCUMENT_TOKEN_TO_BE_REPLACED