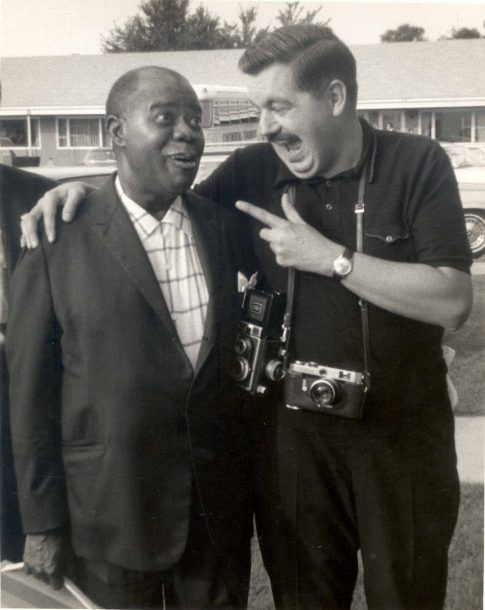 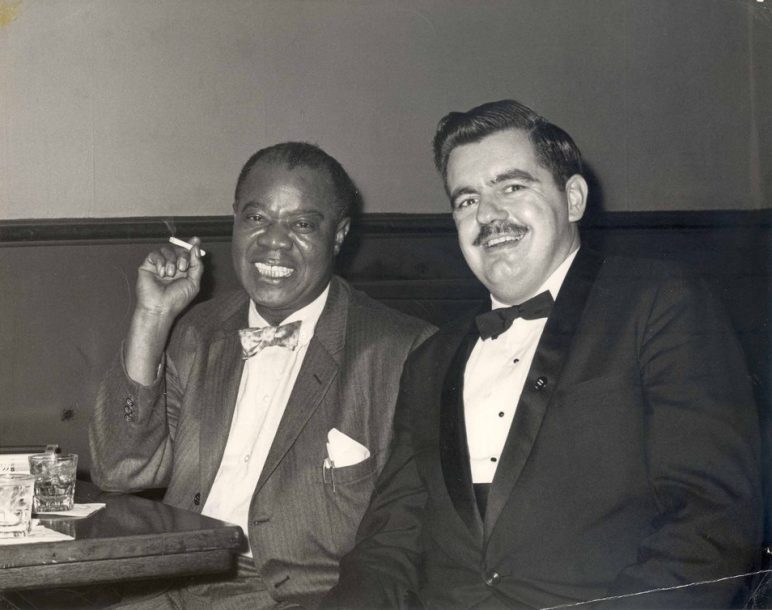 It’s a cozy ranch house on a leafy street on Cape Cod. In autumn, when the leaves have fallen, one can see a placid pond beyond its back yard. Until recently, this home contained one of the world’s largest collections of jazz memorabilia.

For this is where Jack Bradley lives.

“The house now has more breathing space—definitely,” says Jack, sitting back in a favorite chair. For the bulk of his collection is today at the Louis Armstrong House and Archives at Queens College in New York City. Housed in Pops’ brick crib in Corona, Queens, the Archives, thanks to Jack, can now boast of the largest collection of Armstrong memorabilia in the world. “I was paid a fair price. Plus, I now know that my collection will be taken good care of,” says Jack.

Armstrong, who through four marriages remained childless, referred to Jack as his “white son.” Says Jack: “Louis is my grand guru and idol. I feel everything great in music came from him. For me, jazz is two words: Louis Armstrong.”

How did the two meet? “I was dating a girl who knew Louis and through her, I really got to know him. The first time I visited his home in Queens I was so nervous that I was shaking. Pops had a way of putting you at ease. He put his hand on my shoulder and said, ‘It’s okay, man. We’re just two guys hanging out.’ My nerves vanished.”

Jack says that Louis was a man “without pretense—just a down-home, natural guy—as well as a genius. I think he liked me because I never asked him for anything. He had a lot of hangers-on, and Louis was generous to a fault. He was always giving money away. I’d drive him to gigs sometimes, and he’d always let me know whenever he was rehearsing or was going to be on a record date or at a private party—things that a normal person wouldn’t know about—which was great for me. I always had such respect for Louis, and I always tried to keep out of the way of things.”

After becoming Armstrong’s official photographer, Jack traveled with Pops off and on from 1959 until the end. “What we had in common,” says Jack, “was this unending love for the music. Pops never sought fame for fame’s sake. He just wanted to play his horn. Louis had a message—a message about excellence. I’ve never met a man who had more genius for music. He could hear something once, and it was locked in his brain forever. He was constantly creating, constantly giving birth to new forms. And he freed the human voice in his music in a way that it had never been freed before. Louis was always striving to be true to his music.”

Jack says that although Louis knew his worth as an artist, he remained humble. “He never forgot his origins and how tough his childhood had been. Once we were on the road—I think it was Iowa—and we were staying in a motel off the highway. In the room was a small refrigerator. Louis opened it and said, ‘Look, Jack—there’s eggs and ham in there, and a loaf of bread on the shelf. If I get hungry, all I have to do is cook up some eggs and ham and have a feast.’ I had tears in my eyes. This wasn’t long after Pops met the Pope—the Pope had asked to meet him—and here he was, still utterly amazed that he no longer had to go hungry.”

Jack’s photographs of Louis—including a dressing room shot of the artist au naturel from behind—are classics. “But with a subject like Louis, how could you take a lousy shot? Sometimes I feel as though Louis took the pictures himself, just by being there, just by being himself. I simply happened to have the camera in hand.”

In addition to his years with Louis, Jack managed Bobby Hackett and road-managed for Erroll Garner.

On Hackett: “Our first gig—with Bobby’s dear friend Vic Dickenson—was driving to Michigan in a blizzard. We then traveled all over the country and Canada, and it was just fantastic hearing Bobby and Vic together every night and getting paid for it.” After the trumpeter’s death in 1976, Jack raised the money for Hackett’s headstone. “Most people weren’t aware that Bobby had next to no money at all, and there wasn’t even enough for a headstone. Bobby had felt he had an image to keep, and he’d buy the best clothes and the best horns and ninety dollar Dunhill lighters, and he gave huge tips to everyone. A dear man.”

On Garner: “With Erroll, there were no worries. Every night was different, exciting, and he was truly a genius. Even though he had to play ‘Misty’ every night, he’d always play it differently—in a different key, a different tempo. Erroll, though, was camera-shy and didn’t want his picture taken. Both he and Bobby died way too soon.”

Because of his friendship with Louis Armstrong, Jack is a favorite at jazz festivals around the world. “I’ve been to Switzerland, Amsterdam, Hawaii, and New Orleans several times. Man, my friendship with Pops keeps on giving me joy. Originally, it was the privilege of simply hanging with the man—now people want me to talk about Pops, which I’d do anyway, and then pay me! Hey, I’m always happy to spread the gospel.”

As the sun goes down over the backyard pond, Jack puts on a 1938 recording of Louis and the Mills Brothers singing, “Nelly Gray.”

“Man, just listen. Is there anything finer?” he asks.

Several years ago, one of Danilo Pérez’s students was suffering from tendinitis. Pianist Pérez was then a professor at the New England Conservatory; his student, … END_OF_DOCUMENT_TOKEN_TO_BE_REPLACED

As a JazzTimes writer, I can talk about the powers of a dynamic drummer until I’m blue in the face: the weight of each tom-tom’s … END_OF_DOCUMENT_TOKEN_TO_BE_REPLACED

There are certain works of art with which I wish I could have a conversation, so that I might express my gratitude for them. I … END_OF_DOCUMENT_TOKEN_TO_BE_REPLACED