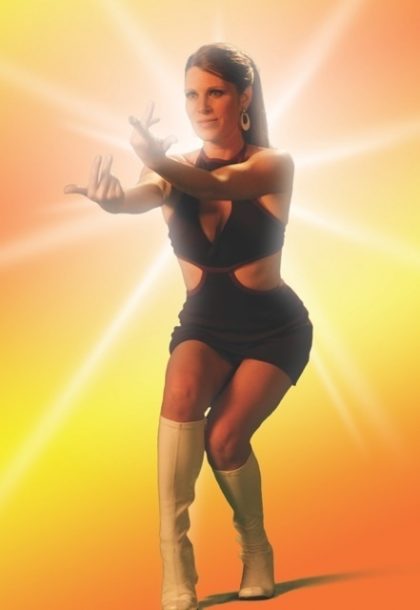 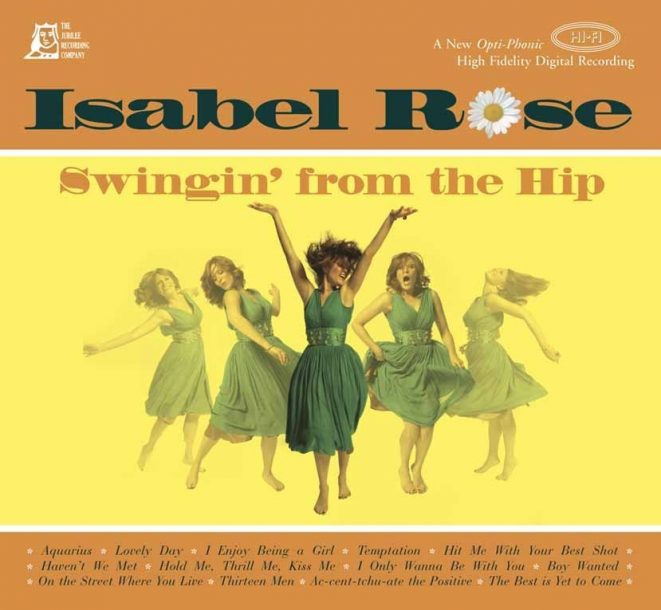 Isabel Rose's Swingin' From the Hip

Now the multi-hyphenated Rose adds vocalist to her list of accomplishments. The cover of her debut album, Swingin’ From the Hip, cheekily recalls Ann-Margret back in her hip-twitching Bye Bye Birdie days. She also owes a stylistic debt to the young Ms. Olsson, but Rose’s purring sexiness is a jigger or two more mature, suggesting shades of Mary Ford and placing her squarely at the crossroads of jazz and cabaret (with a dash of Broadway power and pizzazz for good measure).

Understandably for someone of Rose’s myriad interests, her playlist is remarkably wide-ranging, extending from early Gershwin through Tin Pan Alley, postwar Broadway and ’60s pop to post-disco power rock. She rides in on Esquivel-worthy waves, lifting “Aquarius” from its earthy Hair roots and sending it into a Starlight Express whirl. She then downshifts into a shimmering “Oh, What A Beautiful Morning” that ushers in a swirling, sun-dappled “It’s A Lovely Day Today.” Her Broadway invasion continues with Rogers and Hammerstein’s “I Enjoy Being A Girl,” performing it straight (well, as straight as that indelibly campy tune can be performed) for the first 90 seconds or so, then gradually turning up the heat until it reaches the fevered pitch of an erotic striptease. On “Temptation,” Rose harkens back to the golden days of Patti Page (and Mary Ford) when triple-tracked vocals were all the rage, creating sizzling, country-tinged harmonies that seem equal parts McGuire Sisters and Bangles.

Next, another sharp left turn as Rose transforms, with surprising success, Pat Benatar’s take-no-prisoners anthem “Hit Me With Your Best Shot” into a sultry ballad. The calliope lilt of her “Haven’t Me Met” strongly hints at Kenny Rankin’s delightfully lithe version. “Hold Me, Thrill Me, Kiss Me,” less dramatically impassioned that the Mel Carter original, is frothily reinvented as a girl group finger-snapper, and Dusty Springfield’s greased-lightening “I Only Want to Be With You” is effectively slowed to a hymn-like pace.

Rose’s “Boy Wanted” can’t compare to Ella’s deliciously sweet, cashmere-cuddly treatment, crafted by Nelson Riddle for her incomparable, 1959 The George and Ira Gershwin Song Book, but her reading is engagingly effervescent. Ditto her buoyant “On the Street Where You Live.” She goes stiletto-to-stiletto with Ann-Margret on the bizarre, post-apocalyptic fantasy “Thirteen Men,” a long-ago staple of the Swedish sex kitten’s Vegas shows.

Rose’s jazz chops are most evident throughout a high-spirited, loosen-all-the-stays “Ac-Cent-Tchu-Ate the Positive,” but are near-equally strong on the playfully sensuous “The Best Is Yet to Come” that closes the album.

With its mishmash of styles, eras and genres, Swingin’ From the Hip does cast Rose as a rather chameleon-esque musical figure. Best to think of it as vibrant sampler, filled with delectably bite-sized jazz, pop, Broadway and cabaret nuggets.

If you’d like to share your comments about Isabel Rose or have suggestions for future installments of Hearing Voices, please direct your email to [email protected]

In spring 1963, when Coleman Hawkins was 58 and making some of the most astonishing music of his career, he gave a short but revealing … END_OF_DOCUMENT_TOKEN_TO_BE_REPLACED

Forgive me if I’ve mentioned this before (perhaps repeatedly), but I’ve been playing guitar now for more than 40 years. So when the time comes … END_OF_DOCUMENT_TOKEN_TO_BE_REPLACED

Organ trios and quartets were ubiquitous by the mid-1960s. In African American neighborhood bars and clubs up and down the East Coast, throughout the Rust … END_OF_DOCUMENT_TOKEN_TO_BE_REPLACED

Terence Blanchard looked around the restaurant table and launched into a gentle sermon about jazz education in Detroit that was part homily, part pep talk, … END_OF_DOCUMENT_TOKEN_TO_BE_REPLACED