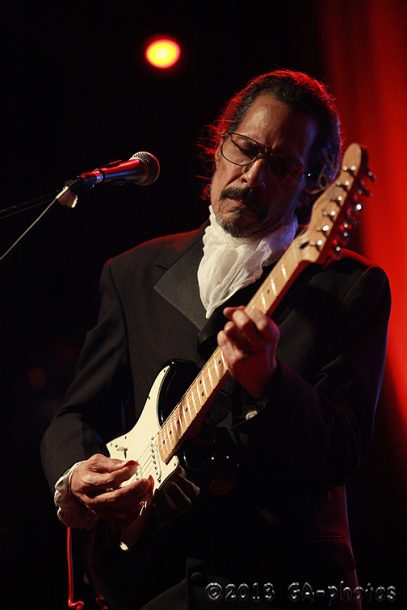 When the 59-year-old Shuggie Otis played Manhattan’s Highline Ballroom Jan. 10, his first New York City date since 2001, the buzz was palpable in the room. The West Coast-based soul/funk singer/songwriter/guitarist has largely been out of the limelight since the 1974 release of his third album for Epic Records, Inspiration Information.

On the recording of Inspiration Information, now a cult classic, Otis, the son of legendary rhythm and blues bandleader Johnny Otis, played virtually all of the instruments, and arranged and produced the album as well. The psychedelic-cum-romantic, Hendrix-esque lyrics are his too. Released in the era of Herbie Hancock and the Headhunters and a year after Pink Floyd’s Dark Side of the Moon, Inspiration Information is also one of the earliest examples of electronic music, featuring synthesizer sequencing that would seem passé today-if the music weren’t so delightfully damn campy. And perhaps it is in consideration of this, that on April 3, 2001, it was rereleased on Luaka Bop Records, David Byrne’s independent label. The reissue that came on the heels of a new vogue for the album in the ’90s features the nine original tracks, plus four tunes from his 1971 record (released on Epic), Freedom Flight, which features Otis’ classic, “Strawberry Letter 23,” covered by the funk group the Brothers Johnson, who launched their version of the song to number one on the Billboard Top R&B Singles chart in 1977 (Quincy Jones was the producer).

Despite a performance in Otis’ hometown of Los Angeles in December that, according to critics, did not go smoothly at all, Otis’ New York City performance was a magical event. The concert was stellar, actually doing justice to Otis’ studio genius.

On April 16, Epic/Legacy will rerelease Inspiration Information once again, this time with four unreleased tracks, plus a second CD of 14 previously unreleased tunes, Wings of Love. In April, Otis will hit the road again for a more extensive tour.

Otis took to the stage of the Highline with a full band: bass guitar, Hammond B3 organ, synth, drums and a three-piece horn section. He was wearing a long black coat and puffy white scarf: “New York City is a gas!” he exclaimed. “I went over to Sony music and met some of the most beautiful people I’ve ever met in my life.”

Otis played a red ’60s Gibson ES-335 sent through a “toy box” of old-school effects such as phaser, wah-wah and fuzz, and then into a Marshall stack amplifier. For some of the tunes, he switched to a black Stratocaster, strung for a left-handed player (although he played it right-handed). He opened the evening with “Inspiration Information” the title track to the aforementioned album, and closed with a double encore of “Strawberry Letter 23” and “Ice Cold Daydream” from Freedom Flight.

Throughout the evening, Otis played songs from Inspiration Information and Wings of Love. His soulful vocals evoked a wide range between guttural throat clearing and high-pitched falsetto; his rhythm guitar playing was akin to that of Curtis Mayfield.

As Otis revived his classic repertoire with the delicate groove of “Aht Uh Mi Hed” and the stop-and-start tempo-shifting funk dance “Sparkle City,” an invisible Day-Glo rainbow of nostalgic psychedelia flashed over the ballroom. The title track from Wings of Love, meanwhile, featured a two-chord vamp with the Stratocaster dripping in phaser, chunking out the simple harmony. Many may have wondered over the years where Shuggie Otis went but there is no denying that he’s back.

Several years ago, one of Danilo Pérez’s students was suffering from tendinitis. Pianist Pérez was then a professor at the New England Conservatory; his student, … END_OF_DOCUMENT_TOKEN_TO_BE_REPLACED

As a JazzTimes writer, I can talk about the powers of a dynamic drummer until I’m blue in the face: the weight of each tom-tom’s … END_OF_DOCUMENT_TOKEN_TO_BE_REPLACED

There are certain works of art with which I wish I could have a conversation, so that I might express my gratitude for them. I … END_OF_DOCUMENT_TOKEN_TO_BE_REPLACED