Skip to content
Become a member and get exclusive access to articles, live sessions and more!
Start Your Free Trial
Home > Features > In Its Own Time: Remembering the Miles Davis Quintet of 1955-1956 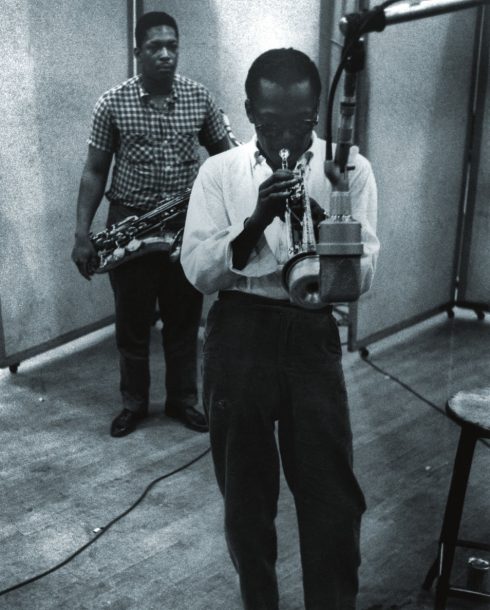 Enter a soft, steamy night in Manhattan in the summer of 1956. As you stroll down lower Fifth Avenue, Dodgers, Giants, and Yankees games float out of radios perched on darkened windowsills. As you cut across Washington Square and approach the Café Bohemia on Barrow Street, you see a crowd already lined up on the sidewalk. The marquee announces the musicians responsible for the crowd: Miles Davis on trumpet; John Coltrane on tenor saxophone; Red Garland on piano; Paul Chambers on bass; “Philly” Joe Jones on drums.

You join the crowd and are eventually ushered into a long, narrow, street-level nightclub to hear one of the finest small bands in jazz history: The classic 1955-56 Miles Davis Quintet.

In 1953 Miles locked himself in a two-room apartment on his father’s farm in Millstadt, Missouri, outside of St. Louis. He stepped out clean.

1954 marked the renaissance of Miles Dewey Davis. On April 29 he recorded the classic “Walkin'” with Horace Silver and Lucky Thompson, helping to kick-start the hard bop movement. On December 24 the galvanic two takes of “Bags’ Groove,” with Milt Jackson and Thelonious Monk (famously sitting out during Miles’ solo), were set to wax. Yet even with these two masterpieces under his belt, Miles was restless, searching for an exciting young working band.

Miles’ first choice on tenor was Sonny Rollins, already considered a saxophone colossus by those in the know. Newk, however, was struggling in Lexington, Kentucky to kick (forever) his own heroin habit. Drummer Philly Joe Jones suggested a Philadelphia musician, John Coltrane, who had once played a gig at Harlem’s Audubon Ballroom (where Malcolm X would later be murdered in 1965), with Miles and Sonny. Davis hadn’t been overly impressed with Trane that evening, but a quick listen revealed that the young tenorman had improved mightily.

Says Miles in his autobiography (Touchstone, 1989): “Because I wanted to find a piano player who played like Ahmad Jamal, I decided to use Red Garland, who Philly Joe had introduced me to back in 1953… [Red] was into boxing and he had that light touch that I wanted on piano. He was from Texas and had been playing around New York and Philadelphia for a few years.”

Philly Joe Jones—so nicknamed to distinguish him from the masterful Basie drummer “Papa” Jo Jones—was simply one of the finest, most driving drummers on the 1950s scene. Miles loved “that thing that he used to do after I played something—that rim shot—(which) became known as the ‘Philly lick,’ and it made him famous, took him right up to the top of the drumming world. After he started doing it with me, guys in other bands would be telling their drummers, ‘Man, give me the Philly lick after I do my thing.’ But I left a lot of space in the music for Philly to fill up. Philly Joe was the kind of drummer that I knew my music had to have. (Even after he left I would listen for a little bit of Philly Joe in all the drummers I had later.)”

Bassist Paul Chambers was born in 1935 in Pittsburgh and died on January 4, 1969. A major talent on his instrument, Chambers at the age of 19 was playing with Miles Davis and blowing away the jazz world. He was also discovering the poison of heroin, dying of tuberculosis at the heartbreaking age of 33.

However, all this lay years ahead.

The quintet—or, as many critics referred to it: The Quintet—recorded their first-to-be-released album on November 16, 1955 in Rudy Van Gelder’s Hackensack, New Jersey studio. The resulting album, simply titled Miles, is relaxed and swinging. Highlights include a lovely version of the Ellington chestnut “Just Squeeze Me” and Benny Golson’s “Stablemates.” Speaking of stables, critics have remarked how Coltrane at this point in his development sounds like a young colt attempting to stand on wobbly legs. However, I hear an adventurous young artist, closing his eyes and taking a deep breath before launching into passionate solos. Combined with Davis’ spare, less-is-more style, the effect is perfect.

So on May 11 and October 26, 1956, the quintet entered Van Gelder’s home studio to lay down four of the greatest jazz albums ever: Cookin’, Relaxin’, Workin’, and Steamin’. If one is talking desert island discs, give me these four albums; Louis Armstrong’s Hot 5s and 7s; Duke Ellington’s Blanton-Webster Band recordings; (and a desert isle wired for electricity); and I’ll be a happy lad.

Recorded in Van Gelder’s state-of-the-art studio much like four nightclub sets, these albums are an embarrassment of riches. Where does one start? Cookin’: “My Funny Valentine,” “Blues by Five,” “Airegin,” “When Lights Are Low.” Relaxin’: “If I Were a Bell,” “I Could Write a Book,” “You’re My Everything,” “Oleo,” “Woody’N You;” Workin’: “It Never Entered My Mind,” “Four,” “In Your Own Sweet Way,” “Trane’s Blues.” Steamin’: “Surrey With the Fringe on Top,” “Salt Peanuts,” “Well, You Needn’t,” “When I Fall in Love.”

And believe me, folks, there are many more incredible tracks spread across these four albums. The five musicians spent two days in Hackensack, producing musical statements that will be enjoyed as long as people have ears and taste.

In 1957 Columbia released the quintet’s classic ‘Round About Midnight album, compiled from sessions recorded in Manhattan on October 27, 1955; June 5, 1956; and September 10, 1956. By 1957, however, The Quintet was no more. Miles, the recovered junkie, fired both Coltrane and Philly Joe in March for unreliability caused by the needle. Trane returned home to Philadelphia, where he kicked his habit for good. By that summer he was blowing wildly at Greenwich Village’s Five Spot in a legendary band led by Thelonious Monk.

In the next three years, Miles would record the masterpieces Miles Ahead, Milestones, Porgy and Bess, Kind of Blue and Sketches of Spain for Columbia, working with artists such as Gil Evans, Bill Evans, and Cannonball Adderley. In the 1960s he would gather together four young men—Wayne Shorter, Herbie Hancock, Ron Carter, and Tony Williams—who would form a quintet as celebrated as the one just discussed.

Yet for fans of a certain age, the Miles Davis Quintet of 1955-56 remains one of the most beloved of all small jazz bands. For many listeners, Miles, Trane, Red, Mr. P.C., and Philly Joe remain The Quintet.

Several years ago, one of Danilo Pérez’s students was suffering from tendinitis. Pianist Pérez was then a professor at the New England Conservatory; his student, … END_OF_DOCUMENT_TOKEN_TO_BE_REPLACED

As a JazzTimes writer, I can talk about the powers of a dynamic drummer until I’m blue in the face: the weight of each tom-tom’s … END_OF_DOCUMENT_TOKEN_TO_BE_REPLACED

There are certain works of art with which I wish I could have a conversation, so that I might express my gratitude for them. I … END_OF_DOCUMENT_TOKEN_TO_BE_REPLACED